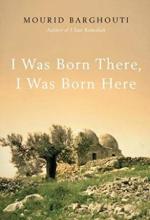 I read this book on a Kindle. The copy we ordered from London never arrived: Israel had stopped international mail to the West Bank several months ago. Electronic book delivery becomes important when you live subject to the whims of Israeli officials. Formerly, getting a manuscript out to publishers was a real ordeal. Thanks to the Internet this misery has become a thing of the past. Yet electronic communication has done nothing to ease the de facto sovereignty and control of the borders which Israel exercises, as Mourid Barghouti, the Palestinian poet who lives in Egypt, discovered when he brought his son, Tamim, for his first visit to Palestine. I Was Born There, I Was Born Here is an account of several trips that the author made to Palestine: at its center is the saga of the father bringing his son to see the homeland. It is noteworthy that there is never a question of living in Palestine but only visiting and obtaining residency papers. I couldn’t help wondering why. If Palestine means so much to Mourid and he is among the fortunate ones who are allowed to stay what prevents him from exercising that option? There might be good reasons but it is intriguing that he doesn’t venture into them in this book.
When Mourid stands before the formidable wall of Acre’s old city’s he is shocked by the insight that:
Palestine didn’t fall in a war that had a beginning and an end, like the wars we’re familiar with. Wars big and small, from the Trojan War to the Vietnam War to the Second World War and more, begin and then end and you know with a precision befitting the human mind that you’ve lost or you’ve won…No

Barghouti writes:
The child born in the Dr. Gohar Maternity Hospital on the banks of the Nile in Cairo will become the young poet of Palestine and its handsome son, with his flowing verses, his smile, and the message of hope that these brought them… this was a new son who was “theirs”... He had arrived “ready-made.”… (p. 105)
And yet his “arrival” is only metaphorical for as soon as he secures his residency he leaves again.
The book is also about “there,” Egypt, home to both father and son, and the experience of the Palestinian living in an Arab country. As under other Arab regimes, the Palestinian is simply a security file. He is dealt with by the interior ministries, not foreign ministries as though to give meaning to the secret motto embraced by the Arab states from the Atlantic to the Gulf: “We love Palestine and hate the Palestinians.” (p. 201)
The book comes full circle in a chapter titled: “The Dawn Visitor,” when back in Egypt the son goes through the same experiences as his father, being deported from the country of his birth, in the course of which he is incarcerated in the same prison in which his father had been locked up seventeen years earlier. Barghouti writes: “As to what happens to him there, it’s no different from what any foreign occupation would do to a citizen who had the miserable luck to fall into the hands of its security forces. Humiliation, slapping, torture with hot and cold water….” (p. 199) He concludes that cruelty and abuse are the same whoever the perpetrator. Palestinians whether in Occupied Palestine or in Arab countries know this all too well and this book gives eloquent expression to their yearning for justice and liberation.
On a more cheerful note, there are good grounds for hoping for real change in the Arab countries and in their governments’ treatment of Palestinians. Recently, it was announced in Egypt that Palestinians born to an Egyptian mother would be given Egyptian passports. Tamim hopefully has a new entitlement. It is also unlikely that prior to the events of last year Mourid Barghouti would have considered publishing a book in Egypt which has this level of criticism of the Egyptian regime, and indeed, the Arabic version was published not in Egypt, but in Lebanon. Now he can do it without expecting to be arrested and placed where he and his son had previously been incarcerated, at Al Khalifa Prison.

Raja Shehadeh’s latest book is A Rift in Time: Travels with my Ottoman Uncle (London: Profile Books, 2010). His Occupation Diaries will be published by Profile in August 2012.