'This Time We Went Too Far': Truth and Consequences of the Gaza Invasion (Revised and Expanded) 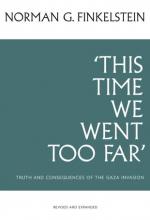 Palestinian life in Gaza and the West Bank is defined by Israel’s oppressive occupation, and this will not change until the occupation ends. Yet, after more than two and a half decades of research and writing on Israeli-Palestinian issues, I remain stunned by the lack of attention, indeed, aversion to context as an explanatory variable. By stripping issues and events of their current and historical framework, many scholars have failed to address the human dimensions of the occupation, which are central to understanding political, economic, and social behavior among Palestinians. Instead, dominant and essentializing conceptualizations of the conflict that ignore Palestinian suffering and the reasons for it are constantly produced and reproduced despite their failure to illuminate or resolve. And, in Palestine specifically these defining and recycled paradigms are further characterized by a willingness to legitimize Israel’s occupation as long as there is no accepted agreement to end it. Even the word “occupation” seems to have been expunged from the lexicon of the conflict as irrelevant and obsolete.

The importance of Norman Finkelstein’s revised and expanded This Time We Went Too Far (originally published in 2010) is that it explains in powerful and indisputable terms what it means for Palestinians to constantly live with a shattered sense of place and home “still watching the ruins of their own history,” to quote Edward Said. In its original version, the book focused on Israel’s devastating invasion of Gaza—commonly known as Operation Cast Lead—that began on December 27, 2008 and ended three weeks later. In this study, as in his vast corpus of work, Finkelstein examines in meticulously researched detail the history, context and reasons for Israel’s massive assault and its impact on Gaza’s people and society (much of the data provided are truly stunning).

In analyzing why Israel attacked Gaza, for example, Finkelstein shreds the official argument that the invasion was intended to stop Hamas rocket fire. (In fact, in the three years since Israel’s “disengagement” from Gaza in 2005, the Israeli military killed approximately 1,250 Palestinians—among them 222 children—while Palestinian rockets killed 11 Israelis [p. 26]).

To the contrary, he shows that the objective was not to end rocket fire, but rather to provoke Hamas into resuming it. Finkelstein argues there were two reasons for attacking Gaza: to restore Israel’s deterrence power, particularly after the military debacle of the 2006 Lebanon war; and to preclude both the emergence of Hamas as a legitimate political actor and the threat of a new “peace offensive” that started to take shape with Hamas’s successful implementation of the June 2008 ceasefire and acceptance of a two-state solution along June 1967 borders.

The new edition includes an extensive epilogue, “After the Mavi Marmara,” examining the reason for, and aftermath of, Israel’s violent May 31, 2010 attack on the Gaza Freedom Flotilla, a continuation of the policies that precipitated the 2008/09 attack. It also includes a new appendix, Finkelstein’s searing analysis of the report issued by the Turkel Commission, which was appointed by the Israeli government (and chaired by former Israeli Supreme Court Justice Jacob Turkel) to examine the attack on the Freedom Flotilla and provide a legal analysis of Israel’s blockade.

One example of how Finkelstein uncovers the Report’s skewed context is the following:

The Report states that “in October 2000 violent incidents broke out in the West Bank and the Gaza Strip, which were given the name ‘the Second Intifada’ . . . . In these, suicide attacks were restarted in cities in Israeli territory.” Its capsule description of the second intifada omits mention that Palestinians did not resort to suicide attacks until five months after Israel had started using massive, indiscriminate and lethal firepower to quell largely nonviolent demonstrations. Similarly, the Report begins by highlighting that “since the beginning of 2001, thousands of mortars and rockets of various kinds have been fired in ever growing numbers from the Gaza Strip” at Israel. But this depiction ignores Israeli attacks on Gaza during the same period that killed many times more Palestinians than projectiles launched from Gaza killed Israelis. (pp. 209-210)

Israel was not guilty of inflicting “collective punishment” because “there is nothing in the evidence . . . that suggest[s] that Israel is intentionally placing restrictions on goods for the sole or primary purpose of denying them to the population of Gaza.”

Yet, if the intent of the Israeli siege was to target Hamas’s military capabilities, and not to harm Gaza’s civilian population, surely it is cause for wonder why Israel severely restricted entry of goods “not considered essential for the basic subsistence of the population,” and why it allowed passage of only a “humanitarian minimum”—a benchmark that was arbitrarily determined, not sanctioned by international law and in fact fell below Gaza’s minimal humanitarian needs. It is also cause for puzzlement why Israeli officials kept repeating privately that “they intended to keep the Gazan economy on the brink of collapse without quite pushing it over the edge.” (p. 213)

Finkelstein flawlessly exposes the report’s failed arguments and internal contradictions (as he does with other arguments throughout the book), casting light on a consistent and unchanged political agenda that aims, at its core, to destroy Palestinian aspirations for a state, a home and a dignified existence.

The book also includes over 80 pages of endnotes, which alone constitute a valuable resource. They contain important substantive and bibliographic material that should be treated as seriously as the text itself.

Given his exceptional and courageous scholarship it is absolutely shameful that Finkelstein has been effectively barred from teaching in the American academy. This injustice speaks to the fact that despite the changing and widening discourse on the Israeli-Palestinian conflict in the U.S. that now allows for greater dissent and legitimizes criticism of Israeli policy—something this book also examines in considerable detail—the struggle remains acute. This work, among Finkelstein’s many others, remains an essential and critical part of that struggle.

Sara Roy, a senior research scholar at the Center for Middle Eastern Studies, Harvard, is the author of Hamas and Civil Society in Gaza: Engaging the Islamist Social Sector, Princeton University Press, 2011.