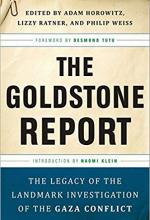 FINALLY, the reading public has been provided with an edited text that makes possible a comprehensive understanding of the Goldstone Report (GR)—the investigation commissioned by the United Nations Human Rights Council (UNHRC) into war crimes allegations arising from the Gaza war (2008–09)— and the controversy that followed its release. Given the near certainty that no further official action will result from the report, without such a book the GR could well be removed to the vast graveyard of excellent UN reports prepared at great expense and effort, but which rarely see the light of day unless one is prepared to embark on a digital journey of frustration and discovery to track down the text and its necessary context online. Yet the GR, however discredited thanks to the tireless efforts of Israel and the United States, is a milestone in a number of ways, not least because its authoritative demonstration of the lawlessness of Israel’s behavior in these attacks helps us understand why, at this stage of the conflict, the Palestinian struggle needs to rely on non-violent soft power coercion, as by way of the Boycott, Divestment, and Sanctions.

The present volume, edited by Adam Horowitz, Lizzy Ratner, and Philip Weiss, offers not only substantial excerpts of the main body of the report, but also eleven solicited essays by expert commentators holding a range of views as well as an illuminating timeline of relevant events. All in all, the editors of The Goldstone Report have made an exemplary contribution to the ideal of an informed citizenship so crucial to the responsible functioning of a democratic society.

The Framing of the Goldstone Report

After media coverage of the Gaza carnage made Palestinian vulnerability visible to the world, widespread allegations of Israeli wrongdoing, accompanied by calls for investigations and accountability, created pressures on the United Nations to act. Like other international initiatives with potentially detrimental consequences for Israel, the inquiry into Israeli conduct in Gaza was opposed by Western nations and supported by most of the rest of the world. This should not be surprising: the establishment of Israel never enjoyed much support in the non-Western world. Israel was seen as a colonial project that led to the massive dispossession of its resident population, an undertaking radically at odds with the overall ethos of self-determination that gradually came to dominate global public reason in the aftermath of World War II. The victimization of the Jewish people under Nazi rule, climaxing in the Holocaust, was and is regarded in the non-Western world as a European problem that should have been resolved in Europe rather than via a kind of geopolitical outsourcing that shifted a burden of immense suffering to the Arab population of historic Palestine. Despite the passage of time, this historical backdrop for the Israel/Palestine conflict has never been forgotten by much of the world, though it has been mostly ignored by Europe and North America. In recent years, however, the pro-Israel consensus in the West has become subject to increasing criticism both from political realists worried about the adverse foreign policy consequences for the United States arising from its unconditional support for Israel and its regional priorities, and from a younger generation of Jewish Americans appalled by Israel’s treatment of the Palestinians.

Particularly in the last decade, Israel further alienated world opinion by its stubborn refusal to end its occupation of the Palestinian territories it captured during the 1967 war. Over time, Israel’s unwillingness to comply with the UN Security Council’s unanimous Resolution 242 calling for its withdrawal and the countless follow-up resolutions, its relentless expansion of unlawful settlements, and its various refusals to implement the Oslo framework have raised serious doubts as to whether the United States has the capability, or even the will, to produce a peaceful and just outcome to the conflict. In his perceptive essay in this volume, Rashid Khalidi insists that the public perception of the conflict is changing in the United States, and that growing sympathy with the Palestinian people explains both the GR’s commissioning and reception. “The Goldstone Report could not have been written, and would have had little effect, as recently as a decade ago,” he writes. “The fact that it had such an impact reflects how the report is both a product of an evolving consciousness and a vital contribution to it.”

To read this article in full, please purchase it.