Perugini and Gordon, The Human Right to Dominate 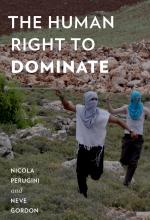 In recent years, Palestine has become one of the world’s most prominent human rights causes, attracting the attention of an array of international human rights observers. This is often celebrated as a major advance for the Palestinian cause and a crucial means for achieving Palestinian liberation. However, in their new book, Nicola Perugini and Neve Gordon sound a major note of caution regarding this development. Instead, they emphasize the myriad ways in which human rights can become bound up with practices of domination, often advancing the interests of the powerful and facilitating violence and dispossession against the oppressed. This ostensibly counterintuitive claim is intended to provoke the legalistic and professionalized world of human rights work, which they argue remains elite-driven and too inaccessible to popular mobilizations. The aim is to prompt a rethinking of the place of human rights discourse in political struggle.

In writing this book, Perugini and Gordon build on earlier work pursued individually and focused particularly on Israel’s colonization of the occupied Palestinian territory. However, their intellectual partnership in this current work succeeds not only in offering crucial insights into the Palestinian case but also in making an important theoretical argument with global ramifications. The authors attack the idea that human rights are either neutral or counterhegemonic. Human rights, they claim, are not and cannot be an abstract terrain separate from the concrete exercise of political power. To believe otherwise indulges “the illusion of the original” (p. 15), according to which human rights can be depoliticized and pursued in a notionally pure form. Likewise, they criticize what they call “the hydraulic model” (p. 13) of human rights, which holds that advances in human rights always come at the expense of the powerful.

Instead, Perugini and Gordon notice the growing tendency for dominant actors, not least Israel, to claim the mantle of human rights in pursuit of their agendas. Thus, conservative actors have begun to emulate the language and tactics of liberal human rights campaigners in a process of “mirroring” and “convergence” (p. 7). When this happens, the originally intended beneficiaries of human rights are stripped of their protected humanity and are instead portrayed as threats to the human rights of the powerful, a process the authors call “inversion” (p. 8). The main content of the volume is taken up with a detailed demonstration of these arguments in the context of Palestine. The authors show how Israel has used the memory of the Holocaust to position itself as a human rights victim, and how Palestinian human rights advocacy against occupation has paradoxically helped to normalize domination by emphasizing minor improvements rather than structural transformation (chapter 1); how Israel has pressured nongovernmental organizations (NGOs) and the United Nations (UN) into greater consideration of human rights violations against Israelis in their reports on recent Israeli military campaigns (chapter 2); how international humanitarian law has been contorted to provide justifications for the killing of Palestinian civilians (chapter 3); and how a new breed of settler NGOs have sought to legitimize the further colonization of Palestinian land by framing their activities as in defense of the human rights of Israeli settlers (chapter 4).

The text is cogently argued, thought-provoking, and filled with fascinating detail. Perugini and Gordon provide a convincing demolition of the idea that human rights stand above politics, and that they always work in defense of the oppressed. Instead, the authors call on us to recognize the inevitably political nature of human rights–based mobilizations. However, this is not in order to discredit human rights altogether, but rather to make more effective use of them. In the concluding chapter, the authors call for a more politicized and popular version of human rights mobilization which eschews the legalism and professionalism of major human rights NGOs, citing the Boycott, Divestment and Sanctions (BDS) movement as the most powerful alternative model. This is unquestionably a powerful conclusion. Yet it also raises questions. First, while it is clear that the authors intend to criticize the work of major international human rights organizations, the precise scope of their criticism is left unclear. For example, it is strange that the authors do not engage at all with the work of Richard Falk, former special rapporteur on Palestine to the UN, whose conception of human rights advocacy has long been inseparable from a clear political vision. They also do not fully address debates within the Palestinian human rights community, as elaborated in the work of George Bisharat, Lisa Hajjar, ElianWeizman, and others, regarding the efficacy of cause lawyering (the strategic use of legal casework for political ends), where the risks of legalism are already well appreciated.

Second, one wonders about the limits of the politicization of human rights which the authors recommend. As they recognize, what makes human rights discourse so effective as a mobilizing tool is its appeal to seemingly universal values. Yet a strategy premised on accepting the political relativity of human rights would surely risk corroding this universal appeal. It would also, perhaps justifiably, be open to charges of cynicism. It is reasonable to ask whether the logical conclusion of Perugini and Gordon’s arguments might not be the abandonment of a human rights framework after all.