Kaposi: Violence and Understanding in Gaza: The British Broadsheets’ Coverage of the War 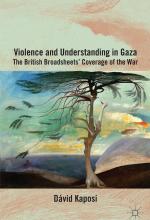 Violence and Understanding in Gaza: The British Broadsheets’ Coverage of the War, by Dávid Kaposi. London: Palgrave Macmillan, 2014. 240 pages. $90.00 hardcover and e-book.

Israel’s assault on the Gaza Strip last year reignited the debate over questions of bias and narrative in the media’s coverage of Palestine/Israel. Now a new book seeks to shed light on one particular aspect of the discussion: how British broadsheet newspapers covered the 2008–9 Gaza war (codenamed Operation Cast Lead). The author, Dávid Kaposi, teaches psychology at the University of East London, and has not previously published on Palestine/Israel. He has, however, authored papers on Hannah Arendt and post-Holocaust Jewish identity, and in the acknowledgments recognizes "the financial and moral help" of the Israel-based Vidal Sassoon International Center for the Study of Contemporary Antisemitism.

The book, according to Kaposi’s introduction, "attempts to examine various ways of understanding violence" through the "case study" of "an analysis of the British broadsheets' coverage of a war" (p. 1). Kaposi adds a further ambitious aim: "to provide insight into dominant ways of thinking about the Israeli-Palestinian conflict" and make "suggestions regarding how to change these dominant ways of thinking so that they do justice to the terrible tragedies of war and the noble aspirations of peace in the region" (p. 2).

The book begins with an introduction to "set the scene" for both Kaposi’s research and the events of Operation Cast Lead, a convergence that is instructive for what it reveals about the author’s political perspectives (p. 2). Assessing Israel’s unilateral withdrawal of settlers and redeployment of armed forces from the Gaza Strip in 2005, Kaposi strives for an "even-handed" comparison of contrasting interpretations of the "disengagement" plan. In doing so, however, he conceals the fact that Israel’s leaders, including then–prime minister Ariel Sharon, themselves sold "disengagement" as means of freezing the peace process and facilitating Israel’s colonization of the West Bank.

From there, he presents his data, assessing how the different newspapers treated subjects like fatalities, context, criticisms of the protagonists, anti-Semitism, reasons for going to war, and the way the war was conducted. Kaposi finds that coverage of the attacks on Gaza was the most extensive in the Guardian, largely in the form of news articles. The Financial Times and the Independent had the most editorial coverage and comment pieces, respectively. Kaposi also notes that coverage of Palestinian fatalities outstripped that of Israeli fatalities by a ratio of 5.5:1 (note that the actual fatality ratio for the war was 100:1).

The book rounds off with a conclusion titled "Beyond Good and Evil." Here Kaposi argues, in what he claims to be "the most important finding" of the book, that the British broadsheets portrayed the war as "a scene of essentially metaphysical nature, with Good pitched against Evil" (pp. 177–78). Their coverage, he says, presented "rigid and mutually exclusive dichotomies [that] excluded even the possibility of dialogue and engagement" (p. 175).

The author has certainly produced an exhaustive analysis of the content in question, but Kaposi’s treatment of the topic suffers from important weaknesses. The question of media ownership, for example, is neglected, as is the role of lobby groups, despite the significance of both factors in shaping how the media covers Palestine/Israel. Another flaw of the book—though one that can hardly be blamed on the author—is that since Operation Cast Lead, social media has dramatically changed how conflicts, including in Gaza, are covered.

When it comes to the conclusions drawn from the data, some are entirely predictable. It is unlikely to come as a surprise that the conservative, pro-Israel media focused the most on Hamas’s projectile fire, while the more pro-Palestinian, liberal press had more by way of historical context and the blockade.

Kaposi’s conclusions are shaped by his desire for the broadsheet newspapers to "find a common ground" and "to genuinely acknowledge rights and wrongs of both sides" (p. 172). Whether he means it this way or not, this is the discourse of liberal Zionists, who defend Israel in public debate by urging "balance," and a fair reflection of what are, apparently, the "complexities" of the situation. Tellingly, Kaposi writes near the end that the book “has so far adamantly, perhaps to the point of irritation, refrained from adjudicating over truth and falsehood” (p. 175).

Arguing for newspapers to do better in covering historical context, responsibility, and agency is commendable—but not at the expense of moral and political clarity. Kaposi says he wants his book to "not only be a case study of understanding, but a case study in understanding." Unfortunately, "balance" does not always enable understanding; it can also obscure it. Those interested in how the media covers Palestine/Israel would do better to read Greg Philo and Mike Berry’s Bad News from Israel (Pluto Press, 2004) and its follow-up, More Bad News from Israel (Pluto Press, 2011).

Ben White is a writer, journalist, and researcher. He is the author of Israeli Apartheid: A Beginner’s Guide (London and New York: Pluto Press, 2009) and Palestinians in Israel: Segregation, Discrimination and Democracy (London: Pluto Press, 2012). He regularly contributes to publications such as Middle East Monitor, Middle East Eye, Al Jazeera English, and others.