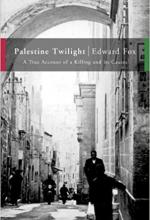 Edward Fox
Palestine Twilight: The Murder of Albert Glock and the Archeology of the Holy Land
2001
-
English
Purchase
Full text:

* The replacement of the main British title of the book, Palestine Twilight, by the more sedate Sacred Geography for the U.S. edition is a reflection of continued sensitivity of American publishers to all matters Palestinian.

This book is a whodunit--a murder mystery wrapped in a theological debate on biblical textualism and biblical archeology wrapped in a treatise on modern Palestinian nationalism. In every chapter, there is a revelation guaranteed to provoke, anger, and titillate the reader, and for that at least it is worth reading.
The story commences on a rainy winter afternoon in 1992, the fifth year of the first Palestinian uprising. A masked man in Birzeit village approaches Albert Glock, professor of archeology at Birzeit University, an fires three shots into his neck and heart at close range, killing him instantly. The killer never was apprehended or revealed. Palestine Twilight, published ten years later, investigates the circumstances of this murder and comes out with astounding conclusions.
The hero of this story, a reclusive and obsessively dedicated scholar, began his life as a Lutheran minister, preaching in the fundamentalist and literalist environment of the American Midwest. In the course of his career, Glock went through a tortuous odyssey of theological skepticism, toward the adoption of a materialist approach in archeology, and finally a joyless commitment to Palestinians and their cause.
In pursuit of his scholarly work, as in his earlier theology, Glock was relentless, even when he knew that his own life was at stake. In 1992, he wrote of his intellectual work what could be seen as a premonition of his own death.

The process of excavation is analogous to an autopsy (post-mortem) in which the pathologist attempts to determine the cause of death and the effect of the disease. . . . Assume for a moment that there was either objection to performing a post-mortem or simply that this process had never been done and the culture never produced a trained pathologist. The facts of death, particularly violent, would become an unverified story, perhaps growing to a legend.