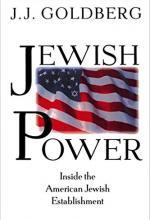 In the advance praise for Jewish Power, Mike Wallace of CBS News claims that J. J. Goldberg, a journalist who covers American Jewish politics for several U.S. and Israeli publications, "has given us a fascinating, provocative, and perceptive book, bound to raise hackles and to stimulate useful debate in the American Jewish community" and to "strike a nerve in Jerusalem." It is possible the publisher sent two different versions of this book to Wallace and to this reviewer. The Jewish Power I read is a dull, poorly written, and cliche-ridden book that has failed either to raise hackles or stimulate debate in New York or Jerusalem. Instead, it may have helped to smooth the egos of the many minor American Jewish "leaders" and bureaucrats who are quoted quite extensively. For the rest of us, the book is nothing more than a sentimental and gossipy "insider" journey into the times and lives of friends of J. J.; it is a repetitive and disorganized examination of what makes some members of the American Jewish establishment tick, and it is guaranteed to comfort every insomnia sufferer.
Perhaps those who do not follow the American Jewish press on a regular basis may find in this book some interesting bits of information about the "big shots" in the organized Jewish community and the way they interact with official Washington and Israel. However, does one really need to know how Shoshana Cardin, the former head of the Conference of Presidents of Major American Jewish Organizations and a long-time Jewish "organizer," reacted to President Bush's 1991 attack on the pro-Israel lobby or how the 1967 War affected the life of M. J. Rosenberg, the former editor of a Jewish newsletter and a small-time operator in the community?
Those readers whose interest has been ignited by the bombastic and suggestive title of the book and by Wallace's praise of it and who expect to find in Jewish Power a "60 Minutes"-style expose into the workings of the legendary Jewish lobby and its various subsidiaries in Washington and New York will be disappointed. The author warns readers early on that they will not find "confirmation of their favorite myths" about Jewish power in the United States or about "clandestine Israeli action to subvert Congress or American public opinion" (p. 19). One does not have to be member of an "anti-Israeli" organization or a fan of The Protocols of the Elders of Zion to insist that an investigative journalist like Goldberg deliver a coherent and insightful analysis of his subject of expertise, Jewish politics, or that he provide new and significant information unavailable in the press or in the many history and political science studies dealing with such topics as the U.S.-Israeli relationship or the policies of the American Israel Public Affairs Committee (AIPAC). Instead, Goldberg supplies us with a mishmash of pseudohistory of the American Jewish community, including the relations between American Jews and Israel and their involvement in liberal causes, and nuggets of journalism about contemporary issues, such as the 1993 Israeli-Palestinian accord and President Bill Clinton's Middle East policy, all of which pretend to cover and explain such ambitious topics as "The Meaning of Jewish Power" or "The Roots of Jewish Power."
In a writing style that is bound to annoy the reader, the author shifts his focus from one issue to another, without tying all of them into one consistent theme. Hence, in the first few pages of chapter 3 ("The Struggle for the Jewish Soul"), we read about the efforts by pro-Likud activists in the American Jewish community to sabotage the PLO-Israel accord. That is clearly an interesting topic that deserves an in-depth analysis of the changes taking place among American Jews in the aftermath of the agreement, of the way they now view their relationship with Israel, and of their impact on U.S. policy in the Middle East. Instead, after describing the lobbying campaign launched by the pro-Likud groups in Congress (most of which was covered quite extensively in the general press), Goldberg suddenly turns his attention to a long and tedious discussion of the attempts made to calculate the number of Jews in the United States.
This hodgepodge of short interviews, pieces of gossip, and many quotes from articles and books never is developed into a big-picture examination of the sources and uses of Jewish political, economic, and cultural power in America. In fact, one of the major problems in this book is the author's tendency to cover too many issues and to drift into too many directions that do not always tie into the issue of Jewish "power" (the Jews and Israel, the Jews and the Holocaust, the Jews and Congress, the Jews and the media, the Jews and African Americans, the Jews and the gay community, the Jews and Hollywood), and doing that without having solid theoretical or historical tools to make some sense of all of these and other important issues.
Goldberg probably would have been better off devoting one book to one of the many topics he discusses, such as the tension between the liberal orientation of the American Jewish community on both domestic and foreign policy issues, which places them on the side of progressive political coalitions, and the support for Israel which forces American Jews to ally themselves sometimes with right-wing causes and politicians in the United States. In fact, this is one of the subjects with which Goldberg does seem to be quite familiar and on which he has strong views (he is opposed to the neoconservative drift in the American Jewish community that resulted from the alliance with Israel and recommends that American Jews project a more independent position on Israel). Unfortunately, even on this subject he sounds sometimes a bit wishy-washy. Perhaps it is his "insider" position that makes it difficult for him to "go all the way" as far as his criticism of Israeli policies or of certain American Jewish individuals and groups are concerned.