Martyrdom in the Context of the Palestinian National Struggle

Martyrdom in the Context of the Palestinian National Struggle

In January 1965, Ahmad Musa, a Fedayeen fighter with the Fatah faction, retreated back into Jordan after a sabotage raid on an Israeli water tunnel near the Palestinian village of Eilaboun in the occupied Galilee. Israeli forces seized Eilaboun in October 1948, expelled its residents (eventually allowed to return after the intervention of the Archbishop of Acre), and rounded up 14 of its young men and shot them three by three in a massacre still commemorated by the village. [1] Musa met his own fate at the hands of Jordanian troops as he crossed the border. The country’s monarch, King Hussein, had initiated a policy of clamping down on Palestinian guerrillas in effort to reduce tension with Israel. Thus was born the first martyr of the Palestinian resistance. [2]

In the Palestinian national and diasporic commemoration of martyrs, Musa became the first symbol of sacrifice. He was soon joined by many more.

In the 1970s and 1980s, Palestinian resistance groups produced countless posters in remembrance of their martyrs. Many of these posters feature a deceased fighter or activist. Many others were illustrations proclaiming, as in one poster, “The people’s martyrs pave the road to liberation.” [Image below] 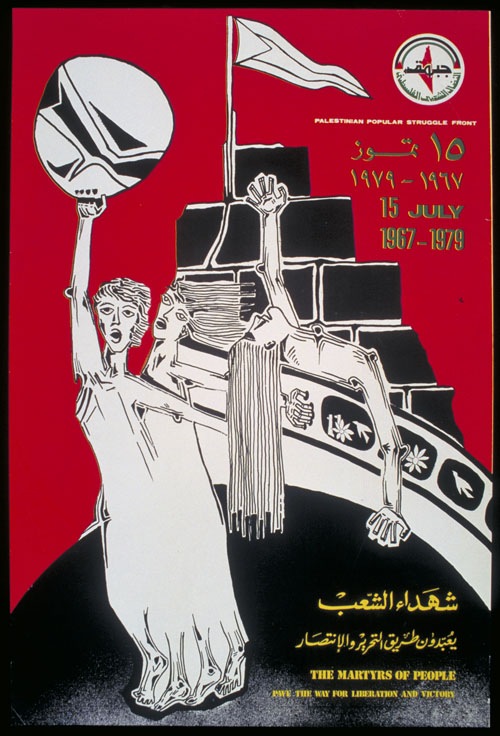 On the third day of the first intifada (1987–93), a demoralized young man, Hatem al-Sisi, [3] stood atop an Israeli military vehicle and attempted to drop a homemade bomb. He was shot and killed by nearby Israeli troops. A Popular Front for the Liberation of Palestine (PFLP) poster declared him the “First Martyr of the Intifada for Freedom and Independence.”

During the second intifada (2000–2005), Islamist factions produced their own martyr posters. Unlike secular and often left-wing forces like the PFLP and Fatah, whose posters were emblazoned with revolutionary slogans and imagery reflective of any international leftist style that was populist and aspirational, groups like the Islamic Jihad Movement were distinguished by their emphasize on Islamic symbols and captions, “It is jihad . . . either victory or martyrdom.”

Not all martyrs were combatants or partisans. A young Palestinian boy, Ahmad Hassam Yusuf Musa, killed near Ramallah in 2008 was, like all Palestinians killed by Israel, remembered as a martyr. His poster does not carry the insignia of any political faction or any liberation slogans. Like many posters of lost loved ones that adorn the streets of Palestinian cities and villages, his poster was mostly likely produced by his family as an act of remembrance. 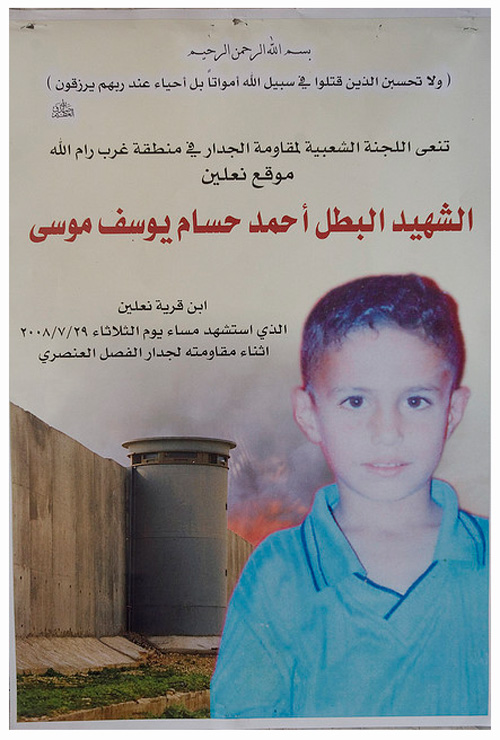 This year marks the 50th anniversary of Martyr’s Day, January 7th. How Palestinians commemorate the day – whether in public demonstrations or private grieving – and how martyrs are remembered – whether appropriated for the national cause or in somber and personal memorials – has long been the subject of scholarly research and publication. [4] Posters are a particularly common form of commemoration, but the tribute to martyrs extends beyond this example. For instance, the Khalil Sakakini Center in Ramallah hosted a One Hundred Martyrs exhibit where a single object belonging to each individual was placed in a translucent case alongside a photo of each martyr. The exhibit’s stated mission was to “give back each Shaheed [martyr] his/her individuality.” [5]

As part of our Special Focus on the 50th year of Martyr’s Day, the Institute for Palestine Studies has made available a series of articles* from our archives:

*Articles that were only made available as part of our monthly Special Focus have since been removed and may be purchased at our co-publisher's website, the University of California Press. Removed articles will automatically take you to the respective article at UCP's website.

The Eloquence of Objects: The Hundred Martyrs Exhibit

Suicide Bombers: Dignity, Despair, and the Need for Hope

Pape: Dying to Win and Bloom: Dying to Kill and Oliver and Steinberg: The Road to Martyrs' Square

Reviewed by Lori A. Allen

Research and scholarship requires investment. Generous contributions from people like you allow us to provide invaluable resources as a public good. Make a tax-deductible donation today!

[2] Musa’s image as “the first martyr” is contrived rather than fact. Although hailed as such by Fatah, other Palestinian factions lost fighters in operations against Israel prior to Musa’s death. Similarly, while the date of Musa’s death is widely recognized by Palestinians as Martyr’s Day, other dates are also commemorated by political and armed factions and Fatah also recognizes April 10th in commemoration of the 1973 assassination of Kamal Udwan, Kamal Nasir and Yusif Najjar by Israeli forces. See: Said K. Aburish, Arafat: From Defender to Dictator (London: Bloomsbury Publishing Plc, 1998), 61; and Laleh Khalili, Heroes and Martyrs of Palestine: The Politics of National Commemoration (New York: Cambridge University Press, 2007), 162.

This June, the IPS Special Focus includes articles from the Journal of Palestine Studies on Remembrances.

View and print PDF installments of Current Issues in Depth