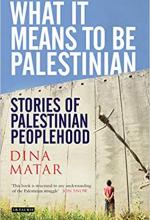 Dina Matar
What it Means to be Palestinian: Stories of Palestinian Peoplehood
2011
-
English
Download
Full text:

Dina Matar’s book, What it Means to be Palestinian: Stories of Palestinian Peoplehood, could not be more timely, revealing in the diversity of its themes and its political content, and rewarding in the light it sheds on Palestinian history and lives. Matar’s book does not claim to close any gaps or give a definitive answer to the question of who is a Palestinian. Instead, the book is both modest and competent, grounded in the narratives of its subjects, who are given agency to tell their own stories.

Through these accounts, we as readers explore divergent experiences, particular turning points with collective and individual consequences, and much else framed within the history of Palestinian eviction at the hands of Zionist forces in 1948. But Palestinians have not entirely been hostage to that momentous experience; they are also active in the making of their broader history and the formation of their future. At the outset of the book, Matar explains the overarching trajectory of the book, answering those who might take issue with its title:
As the stories included in this narrative suggest, “what it means to be Palestinian” is about lived e x p e r i e n c e s a n d c o n d i t i o n s “of being” which change and shift as a result of evolving circumstances and conditions. In different and complex ways, these circumstances are linked to the Nakba, the catastrophe of 1948, when the state of Israel was created and the Palestinians were denied their land and, most importantly, their commonality with other human beings. (pp.xi-xii) This statement summarizes the rationale for oral history. It also follows in the steps of ethnographers of Palestinian lives such as Rosemary Sayigh, who in her studies of the Palestinian refugees in Lebanon highlighted their conditions and yearnings with much sensitivity and acuteness. And in the spirit of the stories told, the diversity of experiences of the people interviewed in Syria, Lebanon, Jordan and Palestine opens up a fluid space where the past and present illuminate each other. Although the narratives begin with the Palestinian uprising against the British colonizers in 1936 and with the Oslo Accord of 1993, Matar explains, The chronological frames contrast with the discursive and lyrical stories within each chapter to show that telling and remembering are continuous processes of provisional and partial construction of personal and collective history that struggle with and against a still-contested present. (p.2)
The book is also sensitive to the varied personalities and attitudes of its narrators. As Matar notes, Some were more forthcoming than others; some were more evocative and lyrical; some more precise and concise; some more emotional; some more restrained; some moral secular; some more religious. (p.5) Such a mosaic is true of humanity in general, but it is particularly apt in the case of the Palestinians and concurs with the aim of the book to portray “their commonality with other human beings.” Even with a history such as that of the Palestinians, punctuated by wars and darkened by exile or occupation, people nevertheless persist in telling their stories in dignified and meaningful ways, summoning up their pasts, but keeping an eye on the present, a connection which their conditions make imperative, as Matar makes clear:
In my interviews, it became clear that Palestinian memory is conditioned by present situations. Hence there is a romanticizing tendency to speak of an ideal existence before Palestinian society and ways of life were dismembered. (p.26)
Notice the testimony of Professor Henry Matar (1916-1993), the author’s father, as he delineates the steps by which Jerusalem gradually became a dangerous place for Palestinians to inhabit and enjoy life in through the 1930s and 1940s. He could have been writing of the Jerusalem of today:
I used to make my way to Jerusalem daily, leaving in the early morning and coming back late in the evening. At the beginning, this was easy as I was able to go by car, but when the situation in Jerusalem deteriorated, the attacks on the roads increased, cars and buses stopped running, I started going with a colleague on his motorbike. After two months, the highway became too dangerous because of sniper fire from a Jewish settlement on the way and I decided to board at the college. It was difficult to get much sleep because of the sound of machine guns and explosions in frontline areas not far from the college. (pp.30-31)

For anyone following the news in Palestine today, this narrative resonates with the daily gradual Israeli encroachment on the livelihoods of Palestinian Jerusalemites, suggesting that the Nakba persists as a living process.
Other themes that emerge from the interviews are those of loss, belonging, longing and an active participation in the struggle. In his account, Shafiq Al-Hout (1934-2009), the eminent member of the PLO who passed away before the book was released in 2011, makes an important point about Palestinian loss and belonging,
… you can survive loss, but you cannot get over this void, the void of not- belonging. It is not a question of land, but of not-belonging. (p.48)

Loss and belonging are intertwined in the Palestinian experience, forming part of the collective anguish that cut through Palestinian lives. Sa'id Barghouti’s emotional language demonstrates Al-Hout’s point, I tell you this story [of his family’s eviction in 1948] because it remains vivid in my brain to this day. It meant much more than longing for my mother who arrived a few days later. It meant longing for normality, for a way of life that was lost for good. (p.33)

The Palestinian struggle is haunted by a past that remains too close to be forgotten and too unjust not to be rectified. The stories of dispossession and displacement trickled down from the old to the young: Salah Mohammad, growing up outside Palestine as the Palestinian movement developed in the 1960s and 1970s, says:
My parents would talk of Palestine as though it was this huge country, or a Paradise, that had everything you could think of. They would tell us about the goodness of life, about their riches, about their customs and about how happy they were. They were the products of al-Nakba and I am the product of al-thawra…I never had a childhood. (p.116).
This exchange between generations was also an interchange among the diverse locations of Palestinians, somewhat like alternating themes in a musical composition: the moment one movement of the Palestinians, say in the diaspora, is subdued or muted for whatever damning reason, the perseverant population living in Palestine raise their voices. And thus the first Palestinian Intifada (1987-1993) was born, rising against injustice to fill the unresolved silence.

Matar revealingly writes of the Intifada,
Interestingly, Palestinians inside Israel provided an unexpected source of inspiration, particularly when they reacted more swiftly than the PLO to events in the occupied territories. (p.158)
Indeed, one of her interviewees, Na’ila Zayyad, wife of Nazareth mayor and poet Toufiq Zayyad, noted that Palestinians in Israel “were the first to throw stones at the occupation forces in 1958.” (p.141). The Intifada with which Matar brings to a close her narratives was a collective drive to disturb and disrupt what the occupation might have considered to be a normal routine of colonial control; thus “The Intifada,” in the words of the Jerusalemite Amal Nashashibi, “came out of suffering, and suffering was our landscape, and our life then.” (p.169). Women, prisoners, poets and children found themselves at the forefront of a new era marked with determined confrontations to rid Palestine of its occupiers, contributing in significant ways to a collective culture of sacrifice and steadfastness in the face of Israeli oppression and repression. To be sure, the Palestinian struggle, as many accounts suggest, has never been even close to ideal and is currently beset by rampant political unaccountability and corruption, as well as wayward acts of violence and irresponsibility. Be this as it may, the struggle still holds a promise and it is far from over. As Matar writes, “Although the nature of the struggle changed after Oslo, the conflict with Zionism remained unresolved and the consequences of the Nakba were not addressed.” (p.189)
Dina Matar’s book is not without shortcomings. Some of the stories come across as incomplete, giving impressions of scattered events rather than a coherent narrative, a pitfall which can be understood in the context of space limitations. I would quibble with her observation that “The Nakba has made Palestinians much more aware of being Arab—their Arabness or Arab Identity—while paradoxically driving a wedge between them and the Arab world” (p.18), and certainly such a claim requires more discussion. Perhaps it would have been helpful had the author provided a clearer rationale for offering us a fresh contribution to the growing genre of books giving the long-silenced Palestinians an opportunity to give voice to their experiences. However, the value of the book outweighs these minor omissions.

Thus, in the spirit of this book, more needs to be done by way of collecting further stories, undertaking additional ethnographies in the present period so as to add to the story of the Palestinians. Not only does it create historical records of formative periods, but it also empowers those who have been denied power and agency to speak and represent themselves to the world as human beings with historical backgrounds and human and political rights.