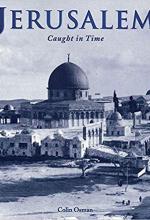 Despite the fact that the Fund's collection constitutes one of the earliest attempts to systematically photograph Palestine, it was not used much by contemporary students of photography until recently; and Colin Osman's Jerusalem: Caught in Time is one of the few books to make extensive use of it. Osman's book includes 153 images of Jerusalem from the 1860s to the early years of the 20th century; all are from the Fund's archive.

The photographs in the book vary in terms of subject matter and were taken by more than twenty different photographers - the majority of them Europeans. Well reproduced in the book, the photographs cover various sites and themes including: Arab and Jewish life in Jerusalem; Christian and Muslim holy sites; the city walls; and, to some extent, the early signs of modernization. The book also includes photographs by Bonfils, Hornstein, Zangaki, Anon, Raad, Krikorian, Frith, Beato, James Graham, Robertson, Schick, Mason Good, and the American Colony photographers, among others.

Jerusalem: Caught in Time is divided into eight chapters - each one starting with a short text followed by a number of related images. The logic by which the chapters are divided appears to be thematic. However, whether knowingly or not, the book's division reflects a number of ideas about the city entrenched in 19th century Orientalist discourse, as well as 20th century Zionist discourse.

The overriding view both advanced by, and reflected in, the organization of the book is that of Jerusalem as a heap of different communities and subjects who have very little in common. By devoting separate chapters to Jewish and Arab life, Osman chooses to frame his visual narrative in the context of the religious/ethnic element on which the claims of the Zionist discourse largely rests. He thereby misses an opportunity to represent the city in terms of - to bring up one of many possibilities - the social lives of its inhabitants.

The same logic seems to underline the devotion of one chapter to the Holy Sepulcher and the Via Dolorosa and another to the Dome of the Rock. Portraying Jews and Arabs or Muslims and Christians as essentially different and separate communities in 19th century Jerusalem - rather than as Ottoman Jerusalemites who happened to practice different religions and have different holy sites - is misleading and historically inaccurate. It only confirms the mistaken impression that Jews and Arabs were always two different national groups.

A similar assumption underlies the chapter on Jerusalem's population in which statistics from two Zionist historians, Ben-Arieh and Gilbert, are provided, stating that there were more Jews than Muslims or Christians in Jerusalem in the 19th century. It is peculiar that Osman chooses to give weight only to the statistics of these historians, despite the fact that he seems aware of a discrepancy in sources on Jerusalem's 19th century population (p. 6). Clearly, he gives more weight to numbers based on the guesswork of European consuls in Jerusalem- as in the work of Ben-Arieh-than to the numbers of the official Ottoman census of 1871-2 (p. 6).

In this regard, Osman's favoring of statistics that give a population margin to Jews over Muslims and Christians is consistent with his reference to 19th century Palestine as Israel: in his discussion of the different photographic processes, he writes that the wet collodion process was "first seen in Israel on Francis Frith's first trip in 1856" (p. 1).

Although many of the photographs in the book are unknown to the general public, a number of them were published before. The captions and the information provided by Osman with each of the photographs are generally accurate, with a number of minor mistakes. For instance, the pictures of the Khalidiyah Library - transliterated as Haldieh (p. 125), perhaps from the Hebrew - is dated 1900, although the library was in fact established, a year later, in 1901.2 In the photograph by Zangakiof the inside of Jaffa Gate, dated 1900, the section of the wall that the Ottoman authorities demolished in 1898 to open a road to receive Kaiser Wilhelm II of Germany appears to be still intact (p. 41); the opening can be clearly seen in the next picture (p. 42).

As a book whose focus is essentially on early British photography of the Holy City, Jerusalem: Caught in Time is still a worthy addition to the photographic library. However, its lack of critical scrutiny or of sources for the information provided makes this book problematic. Like many other photography books on Palestine, it shows a lack of knowledge of the history and the issues surrounding the region.

Issam Nassar is the Associate Editor of the JQF