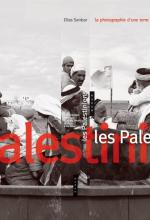 Sanbar’s Les Palestiniens presents a visual story framed by two images. The first is a picture of the Palestine border with Lebanon in 1940, which serves as the book’s point of entry into the Palestine that the author presents. The last – a number of colourful pictures of young Palestinians taken in 2002 – appears at the end of the book and leaves the reader with a sense of hope for a better future, particularly in light of the drama depicted by the intervening images. Les Palestiniens is a book written by a historian, photo collector and activist who employed all of those talents to tells the centurylong story of the Palestinian’s plight. It is, essentially, history told through photographs. And although the history is that of the Palestinians, it is possible to argue that the narrative structure of the book is, in some sense, autobiographical: Les Palestiniens is a book about a people the author is part of, and, because of this, it is a book that incorporates the author’s own experience as part of that people. For the starting narration is on Palestine – the land and its people – before its disappearance in 1948. As it progresses, the storyline follows the plight and national struggle of Palestinians away from the homeland itself. By not continuing the story of the land, or of the Palestinians who remained on it, Sanbar is in some sense telling us a story closer to his own: that of the Palestinian exiles who were transformed into refugees in the aftermath of the 1948 Nakba.

The visual story presented here draws on various archival and photographic collections and is divided into sections by themes and/or eras. The photographs themselves are of great quality. And while some of them were readily available before, if not necessarily published, others are altogether rare. The photographs in the book range from images dating from 1839 to recent images utilizing the latest photographic techniques. And although the story told is powerful in itself, Sanbar’s visual representation significantly contributes to enhancing its power.

The first chapter, “Palestine Revisited”, presents Palestine’s urban and rural landscape since the inception of photography in 1839 until approximately the end of Ottoman rule in 1917/18. The chapter features the work of some of the best known nineteenth century photographers of Palestine – e.g., Francis Frith, Bonfils, Dumas, Frank Mason Good, Fiorillo, and the Zangaki brothers – who, as reflected in the images, often imitated each other’s subject matter. The second chapter focuses on stereoscopic images, which were produced primarily for the tourist market in Palestine and, especially, abroad. Highly representative of European photographic practices at the time, Sanbar’s collection enables the viewers to see for themselves not only Palestine, but also what constitutes a typical contemporary European portrayal of the place as a biblical dreamland. The third chapter continues the same trend, presenting us with charming hand-coloured images of the lost paradise that was Palestine. In all these three chapters, the viewer travels through the various early photographic mediums that were in use through the early 1920s.

In the next three chapters, Sanbar’s attention shifts to Palestine and the Palestinians as a living place and a living people. Chronologically organized, the photographs in them take the viewer from the late Ottoman Period, through the British Mandatory period, to the exile associated with the 1948 Nakba. From there, the viewer sees images relating to the rise of the Palestinian national movement, its ups and downs in Jordan and Lebanon, and the 1987 Intifada. Following, a number of photographs relate to the return of the PLO leadership to the occupied territories in the post Oslo period. All three chapters feature the work of some prominent Palestinian photographers at the time. Particularly noticeable are some unknown, or perhaps forgotten, photographs by the early Palestinian photographer Khalil Raad.

All in all, The Palestinienes contains a large collection of photographs from various archives in Europe, the Middle East and the United States. It goes beyond the scope of any other photographic book published on the topic, as it represents a time period of more than a century and a half. The number of images is such that the reader gets the feeling, at times, that the volume is more a photographic archive than a book. The one thing tempering this sense is the fact that quite a few photographs appear without complete accompanying information, particularly about the photographers. Among the pictures where the photographer is ‘anonymous’, several could be easily identified as the work of the German photographer Scholten who photographed Palestine in the early 1920s. Similarly, the encyclopaedic nature of the book would have been enhanced had the author included photographs depicting life under the Israeli occupation, whether of Palestinians who remained in Israel or those who fell under its control in 1967, at least in the period before the 1987 Intifada. A longer and more comprehensive bibliography would have also made this book more useful to researchers of the history of photography of Palestine.

Still, this is an intriguing book, nicely presented, and including some rare photographs reproduced in amazingly high resolution. It constitutes a very valuable addition to the small, but certainly growing, library of photographic histories of the Palestinians.