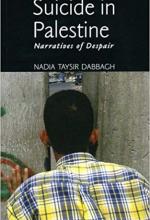 Nadia Dabbagh’s Suicide in Palestine focuses on the “suicide phenomenon” in Palestinian society in response to “increasing public discourse and concern [in Palestine] about reports of suicide which was seen as something new and alien” (p. 2) in 1997, implying that suicide was a growing phenomenon. But the value of the book goes far beyond the analysis of a temporal phenomenon. Rather, it looks in a very innovative way at two main dimensions of self-destructive behavior: what is to be found in public discourse and what is related to private life histories, taking into consideration religious and societal beliefs.
After putting suicide in the context of Western literature, Dabbagh examines past and present attitudes to death and suicide in the Arab world. She then focuses on the specific Palestinian context, looking at what could explain why people seemed to discover, in a state of quasi-panic, that suicide was a phenomenon in their community. She postulates that this moral panic happened when people started to realize that their steadfastness was to a certain extent a façade aimed at covering the despair buried deep inside. She also could have made the connection between this sudden interest in the phenomenon of suicide and the concerns that rose up around adolescents’ mental health in the aftermath of the first intifada: Countless articles in the media and workshops for social workers and counselors dealt with that issue. Adults were very worried about the fate of the youth of the intifada, their concerns based on a mixture of empathy for those children who had resisted the occupation and a desire to regain control over them, for they perceived the youths' new found independence as a threat to traditional values. The only way to know whether panic in public discourse corresponded to an increase in the incidence of suicide would be to have statistics, so Dabbagh takes the reader on a breathless quest for epidemiological data (which also serves as a pretext to demonstrate how statistics are always partially socially constructed).
In the second part of the book, Dabbagh recounts thirty-one suicide narratives, analyzing the strong connection between private life and living under Israeli occupation. Based on her differential analysis of male and female life histories, she keeps her distance from an overly simplified view that tends too often to present Palestinian women as the main victims in society. Her book is especially admirable for two reasons. Young authors seldom are able to use an interdisciplinary approach with the skill that Dabbagh does. She uses concepts from psychiatry and psychology, epidemiological techniques, and anthropological methods without underplaying the contribution of any of those disciplines. She succeeds in giving a very comprehensive understanding of the “suicide phenomenon” in the Arab world in general and in Palestine in particular. She also addresses very sensitive issues without falling into the pitfalls of sensational stories of Palestinian “martyrs” or a unilateral description of Palestinian women’s distress.
Suicide in Palestine is the outcome of a doctoral thesis and consequently will be appreciated by scholars for its solid analysis and references. Furthermore, it is written in an engaging style, enlivened with accounts of a desperate quest for statistics that sometimes holds the reader spellbound: “When I went to the Old Archive everyone laughed and said that no one goes there. I was even told that there were rats. When I finally got the key and went in it was a complete shambles and I could hardly get in . . .” (p. 107).
The suicide narratives also allow the reader to understand what the Israeli occupation really means in the everyday life of Palestinians. The phenomenon of suicide is analyzed in the context of Palestinian identity and of the “ripple effect of war.”
In 2006, one still has to give up the idea of gathering systematic data on suicide rates and suicidal attempts in Palestine. Local newspapers or other media do not seem to be especially interested in the issue anymore. But mental health workers regularly have to deal with the open expression of their patients’ suicidal ideas, as if some kind of equilibrium between steadfastness and despair has been reached, allowing for the acknowledgement of the psychological suffering of families confronted with still worsening life conditions.