Bucaille: Growing Up Palestinian: Israeli Occupation and the Intifada Generation 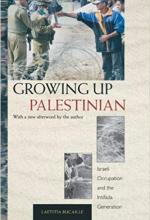 In this slim but engaging volume, French political scientist Laetitia Bucaille skilfully navigates a path between macro-level political analysis and micro-level human stories. The result is a fascinating account that takes us well beyond clichéd frameworks, introducing us to the deep social and political contradictions that have marked Palestinian society, beset by continuing Israeli repression, in recent years. Bucaille, author of Gaza: La violence de la paix (Presses des Sciences Politiques, 1998), focuses her ethnographic attention on three young men from Nablus who grew up during the first intifada and became prominent fighters in the second. Using the experiences of Bassam, Sami, and Najy as a recurring touchstone, she aims to "explain the tilt away from the peace process toward the implacable logic of war" (p. xix) that has characterized Palestine's latest uprising. Such an explanation is no small task, but Bucaille possesses a sophisticated grasp of the relevant political, historical, social, and economic issues. The quality of her structural analysis allows her to make the most out of the personal stories she features. The first intifada provides a crucial backdrop for Bucaille's narrative. In addition to the high levels of popular mobilization, she argues, the uprising was a simmering mix of internal class and other social conflicts. These divisions put the increasingly powerful shibab (young men) "who had nothing to lose" on a collision course with the middle and upper classes, "who needed to survive the devastating consequences of Israeli repression" (p. 25). Early experiences of activism and imprisonment led Bassam, Sami, and Najy to form their own armed cell in 1991. Almost immediately they were targeted by Israeli military intelligence and eventually deported to Jordan in 1992 after surviving a four-day siege at al-Najah University. As the intifada wound down, the three were in Baghdad, ironically enjoying a freedom they never had known under Israeli occupation. The creation of the Palestinian Authority (PA) and the return of the exiled national leadership, Bucaille maintains, brought further social tensions to the surface, especially between the shibab and the traditional elite who were reconsolidating their power. Faced with their declining political influence and the need to make a living, many former intifada activists found themselves pursuing a volatile and contradictory mixture of "legitimate" security employment and off-the-books activity (e.g., car theft, credit card fraud). In chapter 3, Bucaille details the equally troublesome contradictions confronting all Palestinians, from PA security officials and Legislative Council representatives to merchants and ordinary camp residents. The remainder of the book explores the aforementioned "tilt" toward violence in the context of the "new containment" that Israel has gradually imposed on Palestinian communities (p. 84). As the unequal economic realities created by Israel's security strategy emerged, and with Israel's policy of "repression-by-anticipation" (p. 121) providing an added push, the shibab faced a stark choice: leave the country or rejoin the increasingly violent struggle against the occupation. Here Bucaille provides a sensitive discussion of suicide bombings, demonstrating that such phenomena only can be explained with reference to the social and political environments that produce them. In this case, she argues, seemingly irrational violence is animated by a "simple pragmatism" (p. 136) rooted in confinement, hopelessness, and a perceived lack of effective tactical alternatives. The second intifada thus appears as an index of all the (largely negative) developments of the 1990s: continued structural violence, a deteriorating relationship between young people and their leaders, the growth of gangsterism and corruption, and the creeping bantustanization of Palestine. Bucaille's spare, journalistic style eschews many traditional markings of scholarly work, combining unsentimental vignettes and straightforward (but incisive) analysis. Some readers might prefer a fuller version of one or the other, and it is worth noting that the hybrid nature of Bucaille's enterprise does bring certain problems. The narrative doesn't always flow as freely as it might, and the episodic approach sacrifices the potential benefits of a sustained, uninterrupted look at a particular individual's life story. In addition, the absence of any discussion of the author's own positionality and methodology occasionally leaves the reader wondering whether Bucaille actually witnessed the vignettes or whether she is relying on first- (or second-) hand testimony. In general, however, Growing Up Palestinian achieves its dual goal of contextualizing the second intifada and illustrating the shifting travails of the intifada generation. Scholars who are conversant with the literature on contemporary Palestine undoubtedly will find familiar details and lines of argumentation here. Relative newcomers (e.g., undergraduates) will find an account that concisely opens up whole tableaus of recent Palestinian history and provides a rich basis from which to delve further into that history.

__________________________
John Collins, an assistant professor of global studies at St. Lawrence University, is the author of Occupied by Memory: The Intifada Generation and the Palestinian State of Emergency (2004) and co-editor (with Ross Glover) of Collateral Language: A User's Guide to America's New War (2002), both published by New York University Press.