Pilger: Palestine is Still the Issue: A Special Report by John Pilger (film) 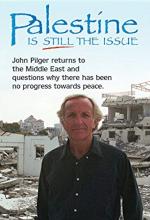 Palestine Is Still the Issue: A Special Report by John Pilger, written and presented by John Pilger, directed by Anthony Stark. Carlton International Media, Ltd., 2002. 53 minutes. Distributed in the United States by Bullfrog Films. $250.00 to buy, $85.00 to rent (reduced rates for activists and grass-roots groups), VHS and DVD.

John Pilger has made a well-informed and engaging documentary against the Israeli occupation of the West Bank and Gaza. His argument is clear and consistent throughout: the root cause of violence in Israel/Palestine is Israeli colonialism. Israel has dehumanized the Palestinians and subjugated them to the longest occupation in modern times, and the Palestinians have been resisting the occupation and fighting for their freedom and independence. These facts are incontestable, and Pilger presents them very well, mixing interviews, authorial commentary, and historical narration to convey a picture of a whole society degraded and denied its fundamental national and human rights.
The film opens with a series of voices. For example, Mustafa Barghouthi states, "There is only one way of ending this, it's ending of occupation because occupation has become the cancer that is eating the lives of both people." Rami Elhanan, an Israeli whose daughter died in a suicide bombing, says, "What the occupation did for us it reduced us into animals in a way that sometimes I am ashamed to say I am an Israeli." And, finally, Ishay Rosen-Zvi, a refusenik, adds, "This is a huge bluff of the Israeli establishment . . . that every criticism of its policy is anti-Semitism." The thrust of the film is to show how Israel has intensified its assault against Palestinian society since the outbreak of the second intifada and is seeking to crush the Palestinians into submission. Pilger's visit to the Palestinian Ministry of Culture sets the tone from the beginning: The vandalism, excrement, and destruction capture the essence of Israel's Operation Defensive Shield, a devastating reinvasion of heavily populated areas of the West Bank in the spring of 2002. For Liana Bader, head of the Cultural Department in the Ministry of Culture, this is the outcome of "the systematic terrorism of the Israeli state."
Pilger shows how ordinary life in Palestine has become "a maze of controls, roadblocks, checkpoints." And these controls remind him of apartheid: "This is how I remembered apartheid South Africa. The hidden effect is the same: Humiliation and anger and death." Newborns die at checkpoints. Curfews grind life to a halt. Settlers grab more land and monopolize water resources. Israel builds more roads for exclusive use by Israeli Jews and walls to seal itself off from the Palestinians and to seal the Palestinians off from each other. House demolitions are common, and collective punishments are the norm. The majority of Palestinians are poor and their children traumatized. A whole nation thus is reduced and dehumanized on a daily basis. In today's Palestine, Pilger concludes, "Fear has a permanent presence." His film shows how life under the shadow of Israeli terror has become a living hell.
As a result, Palestinians, though determined to resist, feel angry and abandoned. Dr. Mona al-Farra, a Gaza resident, states, "I feel that nobody is taking care of us." Barghouthi feels impotent and helpless. A sense of powerlessness is pervasive. The resistance this feeling has generated, suicide bombing, is one of despair and hopelessness. Waafa Idris, the first female suicide bomber, is a clear example: as an ambulance volunteer she witnessed the horrors of occupation on a daily basis and decided that death is preferable to a life of degradation and injury. It is a choice Israeli brutality pushed her to take. As Israeli historian Ilan Pappé explains, "The way out of it is to provide the circumstances in which these young people would find avenues of hope instead of avenues of despair." For the Israeli father who lost his daughter in a suicide bombing, understanding why it happened is key: "You have to ask yourself: have you contributed in any way for this despair, for this craziness. . . Understanding is part of the way to solving the problem."
The Israeli government is oblivious to such humanism. Dore Gold, advisor to Israeli prime minister Ariel Sharon, casually affirms Israel's right to determine Palestinian destiny: "What we're speaking about is our willingness to negotiate with the Palestinians their self-government." With endless U.S. backing, Israel also has continued to build and fortify illegally what Pilger calls "a network of armed colonies," carving up around 42 percent of the West Bank and dominating Palestinian communities. Oslo is the name of this "classical colonial fix" (Pilger's phrase): A partially empowered Palestinian elite and a totally disempowered mass population are both subjected to the diktats of Israeli security needs. Palestinian sovereignty has become a meaningless proposition.
Even though the PLO has led the Palestinians into this catastrophic bind, Pilger is uncritical of its politics of capitulation. By invoking positively the PLO's 1988 Algiers decision (renouncing "terrorism" and acknowledging the existence of Israel, as the U.S. demanded), Pilger clearly accepts the limits this has put on the pursuit of the legitimate rights of the Palestinians. That is why he problematically concludes his film by claiming that the establishment of a Palestinian state in the 22 percent of Palestine occupied by Israel in 1967 would constitute justice for the Palestinians. Such a solution to the Palestinian issue would leave most Palestinians dispossessed and refugees. If the PLO exploits the necessity and paramountcy of decolonization to legitimize a politics of surrender, then Pilger lets them get away with it. It is very unfortunate that such a staunch supporter of the oppressed worldwide should advocate such a partial realization of Palestinian rights and justice.

Bashir Abu-Manneh is assistant professor of English at Barnard College.