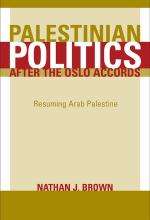 Nathan Brown did most of the research for this book in 1999 and 2000 while holding a Fulbright teaching fellowship at Ben-Gurion University in Israel. Apart from his above research interest, Brown does not hide his interest (and that of all members of his family) in living for a period in Israel. He states the central theme of his book to be "that the struggle over defining Palestine concerns not how Palestinian politics should begin but over how it should be resumed" (p. 5). He contends that much of Palestinian politics since the signing of the Oslo accords "has consisted of a struggle over how to build a Palestinian polity as detached as possible from the context of the struggle with Israel" (ibid).
In other words, the book is set to prove that the Palestinian national narrative-in which the Zionist movement in Mandate Palestine, the establishment of the state of Israel in 1948, and its occupation of the West Bank and Gaza Strip in 1967 figure prominently-is of minor relevance to the understanding of present-day Palestinian politics. Hence, the stress of the book's seven chapters is not really on the central issues of Palestinian politics (self-determination, sovereign statehood, and the refugee question) but on legalistic, constitutional, and institutional aspects of the Palestinian Authority (PA) in its attempts, unsuccessful so far, to build a semblance of a state under extremely adverse conditions imposed by a colonial settler regime.
It is no accident that the book stresses the "Rocard Report" (published in 1999) sponsored by Henry Seigman of the U.S. Council on Foreign Relations, which is very critical, rightly, of the performance of the PA. (The reviewer was a member of the Palestinian team, which contributed to the report.) The report's mandate was confined to examining the institutional structure and performance of the PA at the end of the interim period and the onset of the final status period for negotiating the core issues of statehood, refugee rights, the status of Jerusalem, borders, the removal or evacuation of Israeli colonial settlements, and control over water resources. The Rocard Report is basically a policy oriented technocratic document, not a political treatise or a study of Palestinian national politics. The contest over the formation of the Palestinian political system continued with renewed struggle after the Oslo accords, with new contenders entering the field (e.g., Hamas). Unresolved questions related to the Palestinian national project, the rights of the Palestinian refugees, the borders of the future Palestinian state, and its relations with Israel continued to dominate politics. In fact, one major reason behind the second intifada was the failure of the "peace process" to move Palestinians toward independent statehood.
Despite its details about internal institutional and legislative issues, the book fails to conceptualize the relationship between Israel and the West Bank/Gaza Strip as a settler colonial relationship with all its implications. Hence, it deals with Israeli policies and actions only as responses to the intifada, which is referred to in terms of violence (p. 2) rather than-regardless of the methods some of its political activists employed, particularly against Israeli civilians-as an uprising aimed at ending the military occupation and achieving political independence. Even when the Israeli army reoccupied most of the West Bank in April 2002, this is referred to as a military campaign (pp. 105, 204). Although the author acknowledges "the widespread destruction, the confiscation of records, the scale of looting and the targeting of apparently innocent organizations" (p. 249) by the Israeli invading army, he refrains from explaining the political aims behind such actions, and, in fact, insists that the purpose behind the destruction "remains unclear and selection of targets obscure" (ibid).
The author's technocratic paradigm of politics does not allow him to see the colonial dimension nor the similarities (and specifics) of Israeli policies toward the Palestinians compared with other colonial settler situations or with apartheid-type policies (e.g., the closures, the curfews, the "separation wall," the bypass roads, the classification of Palestinian territory according to the degree Israel allows administrative powers to Palestinians, the pass system, the slicing of the West Bank into a number of separate and self-enclosed "Bantustans," the cutting off of the Gaza Strip from the West Bank and both from East Jerusalem, the daily humiliation of tens of thousands of Palestinians at the hundreds of checkpoints, etc.). The author does not see that the weakening of the PA, the fragmentation of Palestinian society and its impoverishment, the detention of thousands of political activists, and the assassination of political leaders and cadres, all had the aim of destroying the possibility of a viable and independent Palestinian state and the rectification of the historic injustice done to the Palestinians, through dispossession, dispersal, occupation, and land confiscation. A language of neutrality is often nothing but a language to hide the inherent partiality to the occupier and oppressor. Even though this book is rich in details about many Palestinian governmental institutions as they operated on the eve of the second intifada, linguistic neutrality cannot replace objectivity, which demands looking at sociopolitical reality without distorted lenses and calling an occupation an occupation, a colonial power a colonial power, and an apartheid system an apartheid system.
__________