Masalha: The Politics of Denial: Israel and the Palestinian Refugee Problem 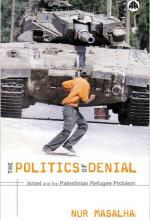 The title of this book is somewhat misleading. It is in part a book about the Israeli "politics of denial," as its title promises, but it also exposes even more forcefully, and to my mind more importantly, the Israeli politics of dispossession. The two, denial and dispossession, of course, are intertwined. Those who dispossess are powerful enough to erase their crimes from their own and others' official narratives.
The chapters on denial are part of a new field of inquiry for this prolific historian. One chapter is devoted to the beginning of the struggle against denial of the 1948 nakba in Israel, through the works of both the new historians and the professional Palestinian historiographies that appeared more or less at the same time. A later chapter examines thoroughly the way denial of the 1948 ethnic cleansing has been perpetuated by the peace efforts since 1967. The epilogue calls for a future peace in Palestine based on Israeli acknowledgment of the 1948 ethnic cleansing and the restitution of its victims' rights, through the implementation of UN resolution no. 194 and the right of return.
The rest of the book is, to my mind, one of the first, and definitely one of the most successful, attempts to present the Zionist and Israeli politics of dispossession through the years. Masalha earlier wrote a sort of trilogy: His first book dealt with the 1948 expulsion (Expulsion of the Palestinians, Institute for Palestine Studies, 1992); his second book examined transfer plans in the State of Israel well into the 1990s (A Land without a People: Israel, Transfer, and the Palestinians, Faber and Faber, 1997); and his last book (Imperial Israel and the Palestinians: The Politics of Expansion, Pluto Press, 2000) analyzed contemporary policies of expansion and uprooting. The books were detailed and left very few holes in this chronology of state crimes, of which very few readers in the West, particularly in the United States, are aware. In this rather thin book, this same narrative is presented concisely, and consequently the picture is clearer and even more chilling.
The advantage of having in one place the continuum of thought and praxis of dispossession can be seen particularly in the less-known episodes of transfer and expulsion. One such example is the story of Gaza, narrated in chapter three of this book. Masalha points out the direct link between denials of the nakba, Israeli advocacy of resettlement plans for the refugees far away from Palestine, and the actual policies of expulsion. He is right in stressing the need to analyze each of the three objectives in relation to one another.  Whenever the historical opportunity seemed ripe, the Zionist movement or the state of Israel pushed strongly in all three directions: trying to wipe out the refugee issue from the peace agenda, attempting to resettle the refugees away from Palestine, and uprooting the Palestinians who had not yet become refugees. This relentless effort of dispossession has not ceased for one moment since 1948. In 1956, such a historical juncture seemed to be available for the Israelis, but they did not have enough time to fulfill their plans on all three fronts. In conjunction with the 1956 Anglo-French-Israeli attack on Egypt, the Gaza Strip fell under Israeli control for a short while. The historiographers of that war tend to focus, naturally, on the Egyptian-Israeli scene, forgetting about Gaza with its large refugee community. The Israeli government initially thought Gaza would remain forever part of Israel and could not have predicted the international pressure that eventually forced its army to withdraw. In those early days, the government could satisfy its territorial appetite by adding yet another part of Palestine to the state of Israel, but at the same time the annexation enlarged the number of Palestinians under Israeli rule. As always in Zionist history, the question was how to incorporate as much of Palestine as possible with as few Palestinians as possible. The same Israeli officials involved in the 1948 ethnic cleansing were busy devising plans to disperse the refugees in Gaza far away from Palestine, but the short-lived occupation did not allow them the time to implement their scheme.
The Gaza Strip again became a relevant topic for Israeli transfer policies in 1967. However, the old veterans of the 1948 depopulation operations conceded the initiative to someone else: Ariel Sharon, who wanted to introduce Jewish settlements there and reduce the population of the refugee camps. He was then, as he is now, at the center of a Gaza initiative.
I am sure that readers of this book would experience the same déjà vu feeling as I had while reading it. However, the difference today is that Sharon finds the settlements an inefficient tool of depopulation and resorts to direct killings, starvation, and economic stagnation. Yet, the wider picture today is still the same as the one Masalha portrayed so skillfully in his historical survey. It applies not only to Gaza, but also to the West Bank, and in the more distant future, to the Palestinian areas inside Israel. Thus, the author's analysis of Israeli policies remains relevant: isolation of vast areas by means of building high walls and electric fences, operations aimed at thinning the population, schemes of expulsion, and a constant effort of deception and denial to absolve the Israelis from any responsibility and accountability. By exposing the ideology behind the atrocities and by telling the full story of their history, Masalha's book is an invaluable contribution in the struggle against such horrendous programs in the future. No less significant is his critique of the pseudo peace plans such as Oslo, the road map, and the Geneva Accords that undermined, intentionally or unintentionally, the struggle against denial and dispossession in Palestine.