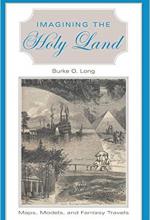 Burke O. Long is a well-known scholar of the Bible and biblical scholarship.  Recently he turned his attention to imaginings of the
in . His Imagining the Holy Land is a startling account of nineteenth and early twentieth-century American passion for the birthplace of Christianity: . This passion fueled the creation of a multitude of imaginary reconstructions of the “
”—physical, visual, and oral—whose resonances still can be felt and seen. Through these imaginative visions of the
, heavily inlaid with Protestant and evangelical myth, Long enables the reader to see a crucial, and until recently hidden, dimension of ’s continued preoccupation with and the
. As Long puts it in his introduction, “from the very beginning of the American Republic, the idea of the Holy Land, as distinct from the physical place, was a flexible and powerful cultural myth” (p. 1).
With the rise of “fashionable” tourism in the early nineteenth century, became the destination of choice for many zealous American Protestants. America’s “infatuation with the Holy Land . . . shifted from conceiving it as a nonearthly utopian space—imagined in poetry, song, and liturgy—to an idealized, touchable place—a fantasized reality on the ground” (p. 2). But travel from to was costly, lengthy, and fraught with dangers. To feed the public demand, a most unusual phenomenon arose: creating miniature replicas of , , and the
at home. It is precisely this American infatuation with the biblical homeland that Long excavates in this book through theme park models, stereographic tours, photographic pilgrimages, travel diaries, academic ventures, guidebooks, and maps. He shows us how perfectly the Protestant ethic and the capitalist impulse coincided in the business of “
” imaginings.
First, Long takes us on an extremely detailed – but nonetheless fabulous – journey through a sampling of these early replicas. Chapter one sets the tone with a lengthy account of one of the earliest of these "
" theme parks:
set up in the late 1870s along the shores of
in upstate . The brainchild of Methodist minister John Heyl Vincent and Methodist industrialist Lewis Miller,
became instantly popular. Surrogate pilgrims flocked there, eager to relive the exodus from , see replicas of the pyramids of and Moses' tabernacle in the wilderness, wander through the make-believe
and down

Palestine Avenue
to the Promised Land, and view Wyeth's model of (see pictures on pp. 8-9,18, and 34-35). The custodians of
not only capitalized on
longing and evangelical hype but also threw in a good dose of the "exotic" Orient that was so fashionable in Victorian America. Thus, they paraded an endless series of "orientalizing cross-dressers" and even had evening soirees where these so-called "Orientals" staged Muslim prayer meetings and exhibited "Oriental hospitality" (see pp. 21, 23, and 26.
Next, Long takes us on a tour of the full-sized replica of Ottoman Jerusalem built for the World’s Fair of 1904. It featured pseudopilgrimages to New Testament sites, a sensational reenactment of Jesus’ crucifixion, and Americans dressed up as Orientals in colorful costumes, with camel rides and guided tours. The world’s fair was supposed to be a testament to “’s righteous (and progressive) achievements” (p. 48), and the recreation of was intended to stamp ’s achievements with God’s blessings. As Long eloquently puts it, “The elaborate fantasy of Jerusalem as Holy Land thus lent moral and religious authority to the exclusions, celebrations, and paradoxical aspirations to universality that were embedded in a particular vision of America and her limitless future” (p. 49). A special souvenir album of prepared for the fair claimed that visitors would escape the squalor and poverty of modern and instead would see “pristine” as it was during Jesus’ time (p. 58). The tradition of miniatures continues in such places as the “New Holy Land” in
(p. 79).
Long enlivens his Holy Land terrain with a host of eccentric characters, like Madame Lydia Mamreoff von Finkelstein Mountford, who made a living by dressing up in Oriental costume and narrating biblical stories, psalms, and parables at the Holy Land theme parks. She is quoted as saying “You cannot go to , so comes to you. To American energy all things are possible” (p. 3). Long also brings to life some of the chief creators of parlor tours, such as Charles Foster Kent and Jesse Lyman Hurlbut, whose parlor tour of stereoscopic photographs, Palestine through the Stereoscope, was bought by thousands of armchair travelers eager to relive the Bible through 3-D-like pictures. As Long puts it, “with an assurance born of Protestant iconoclasm, the authors erased or modified much of the contemporary reality of Ottoman Palestine and encouraged their charges to imagine a biblical landscape peopled with familiar figures drawn from the Bible text” (p. 103).
Long links America’s Holy Land infatuation to the establishment of centers of learning in Palestine, such as the American School of Oriental Research (ASOR) in Jerusalem, founded by zealots like J. Henry Thayer of Harvard University. Among these early scholars and missionaries, Long detects influence of “the widely accepted opinion that the medieval Crusaders’ aim to restore the
to Christian influence was finally being realized” (p. 135). Like the parlor tour and theme park Christian zealots, these academics “fed the public’s hunger for Bible-centered romance” (p. 139). William Foxwell Albright, ASOR director from 1920 to 1929 and 1933 to 1936, was especially guilty of subordinating academic scholarship to entrepreneurial needs.
The greatest weakness in this book is Long’s inability to explain how this Protestant American obsession with the
turned into support for a group and a cause that they openly despised: the Jews and Zionism. This would not be an issue if he had not ventured out of the domain of the American imagination (the book’s forte) and tried to link up the phenomenon with what happened in . His discussion of the ASOR is sketchy at best.  Right at the end, Long brings Max Leopold Margolis, a Jewish scholar and ardent Zionist, into the picture. Through Margolis, Long raises the question of the sudden shift in focus of the American Protestants from coveting the sacred land for themselves to being ready to give it away to the Zionist cause. How and why did this happen? Long leaves the reader wondering. He notes that in post–World War I America, Klansmen and Bolshevism were fanning the paranoia of isolationism. He further notes that “Albright [who accepted Margolis into the ASOR] was less friendly to the Zionist cause than he would later become,” but he provides no explanation of when or how this happened (p. 159).
Long tacks on a final chapter, “Mapmakers and Their
.” It is a valiant attempt at map analysis, but Long is clearly out of his league here, making some useful points about the inclusion of biblical places on maps, such as Jacob’s Well, that suggest their location is known for certain, whereas it is only hypothetical. He makes the same point for routes shown on modern maps of , such as the migration of the Israelites into
. In order to make a significant contribution in an actively studied field, Long needs to delve deeper.
Overall, Imagining the Holy Land is an eye-opening account of the American obsession with . He uses his knowledge as an insider to analyze a phenomenon from whose very tradition he stems. Anyone keen on knowing the origin of Disneyland theme parks in America or keen on a better understanding of the ongoing active U.S. involvement in Palestine and the Middle East should consult this book.

Karen Pinto, assistant professor in the civilization sequence program at the American University of Beirut, is the author of "Capturing Imagination: The Buja and Medieval Islamic Mappamundi," in Views from the Edge: Essays in Honor of Richard W. Bulliet, ed. by Neguin Yavari and Reeva Simon (Columbia University Press, forthcoming), and Surat Bahr al-Rum: The Mediterranean in the Medieval Islamic Cartographic Imagination (forthcoming).