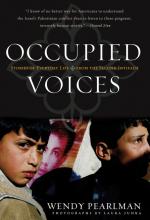 Like many American Jewish students, Wendy Pearlman traveled on a subsidized trip to . Unlike most, she stayed behind and, in January 2000, took a taxi to the
, where she stayed for six months, serving as a volunteer in a Ramallah human rights organization and attending the political science classes of a rather acerbic professor at
. Later in , when the intifada broke out, she was glued to the television screen, watching as violence flared, people died, and American newscasters produced a stream of rapid-fire, but shallow, commentary. What she missed were the voices she knew from her stay in the
. A bus carried her back to record the “silenced Palestinian side of the story” (p. xxi) through eighteen narratives including those of a financial adviser, two theater directors, schoolchildren, a filmmaker, a mother who has lost a child at a checkpoint confrontation, and an agricultural engineer, among others.
Capturing “one life at a time” (p. xxvii) is of course not simply a matter of turning on the recorder (and remembering fresh batteries, which seems to be an authorial weakness). Pearlman is an intelligent and sympathetic listener and her matter-of-fact presentation is effective in capturing the mixture of dramatic danger and the mundane everyday concerns that characterize civilian life in the prolonged and violent crisis of the second intifada. Her framing questions are simple: She begins by asking each person for his or her experiences during the first three months of the intifada and ends by asking for a message to the outside world. While the responses to the latter are unsurprisingly rather uniform, experiences during the intifada have the stamp of the immediate and individual. Mohammed, an overworked surgeon in the Ramallah hospital, discovers that the sixteen-year-old patient on the table, wounded badly in the chest and abdomen, is his relative; he is called back to the hospital for another emergency operation in the middle of the boy’s funeral. Khaled, the codirector of the Inad Children’s Theater in Bayt Jala, which was shelled on , develops stand-up comedy routines about checkpoints and closure. Suha, a college student whose fifteen-year-old brother was killed at the City Inn checkpoint in Ramallah, used to write poetry but didn’t like to read it to anyone except her brother. Her view of the larger political picture is succinct: “It is only after a lot of kids die that they agree on a little piece of land” (p. 88).
Pearlman’s presentation of herself is sometimes faux-naїf and often gently ironic.  Noting how visits to new acquaintances almost always included a tour of the family home, she is surprised to find the same pattern when she visits a family in Khan Yunis whose house has just been demolished. A young girl points to various clumps of metal, wood, and plastic shards, and, speaking in the present tense, shows the guest her bedroom and that of her big brother and his fiancé when they get married. Pearlman manages to mutter the expected formula for houseguests: “How nice,” I whispered, “how beautiful” (p. 136).
Pearlman’s emphasis on understanding the crucial first three months of the intifada is salutary, and her attention to the fabric of civilian life as it unravels juxtaposes ’s use of excessive force with the multiple concerns of civilian life. Noting that the Israeli air force joined ground forces with attack helicopters on day four of the intifada, she recounts how one acquaintance responded: He rushed to his corner market and bought a five-pound tin of Nido powered milk and one thousand tampons (p. 59). The contradictions of the Oslo years are captured in one story: Iman, a Birzeit University student, returned to her hometown of Hebron after it was divided into Palestinian and Israeli areas in 1997 (cutting her house in half) only to find herself attacked by settlers throwing stones at “an Arab” and an Israeli soldier denying her entry to a Palestinian area. She started going around in circles: “I didn’t know where the Palestinian area ended and the Israeli area began” (p. 173).
Pearlman clearly intends her book as an expression of solidarity and a witness, and it does so in a nonpolemical and honest manner. While her narratives may be exemplary, they cannot be taken as straightforwardly representative of Palestinian society in the second intifada. Almost by definition, the “good talkers” (p. xxiii) that Pearlman records have found a way of understanding the ordeals they, and those around them, face. (They are also disproportionately middle class and professional.) Their resilience, good humor, openness, courage, and sanity are not exceptional: Indeed, they are key resources of Palestinian civilians. But no society is blessed with a uniform population of well-meaning and humane individuals. The point may be obvious but is important in avoiding an underestimation of the multiple effects of prolonged, violent, and traumatic conflict on the Palestinian population.
In a 2003 postscript, Pearlman returns to . The resilience is still there but the stories have a darker hue. Mohammed the surgeon now walks four miles a day from his village to the hospital; Iman has graduated from
and is a counselor to traumatized ambulance drivers in ; Khaled, the theater director, is bringing drama to children in nearby schools, but fears for his own two-year-old daughter: “My surroundings are stronger than I am” (p. 148). The sense of lives held hostage to injustice is palpable. When asked whether he ever will be able to return to rebuild his destroyed house, Mahmoud sighs and says: “What lies between me and my house is a solution to the question” (p. 246).

Penny Johnson is an associate researcher at the
,
, and director of the office of the
.