Karmi: In Search of Fatima: A Palestinian Story 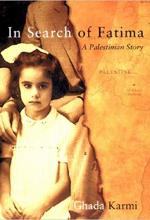 Ghada Karmi divides her autobiography into three distinct parts, which correspond to the common—if not the archetypal—phases of the Palestinian experience: First, the events leading up to the Nakba, the war, and the exodus from Palestine; second, the initial refusal to accept the finality of exile followed by the struggle for and with identity, and the often futile attempt to lay down roots in alien soil; and third, the redemptive reconnection with the Palestinian past and the effort to join in the battle for justice through political action. This book, however, must be read not only as a Palestinian story, but also as an Arab woman’s story: The struggle for identity is not only a national but also a personal one in which the writer seeks an independent life in society and a voice as a free woman. In this respect, the book takes its place in a well-established tradition of modern Arab women’s autobiography, especially by those women who have sought a role in public affairs from which, because of their gender, they have been excluded. In its dual function as a Palestinian and an Arab woman’s autobiography, the book succeeds admirably.
Ghada Karmi was born in in 1939 and was eight years old when her family left the city in 1948. The great events are recalled as they were lived, as a series of chaotic moments, but the confusion of the little girl is given cohesion and interpretation by the political and military history of the period gathered, no doubt, as much from her readings and her later political activism as from stories endlessly retold by various older members of the family and acquaintances. If the general outline of the story of the war and the exodus is well-known, some of the small personal memories of a young girl are not. These include interesting details of everyday life and some fascinating historical might-have-beens. Some of Karmi’s memories, for instance, are populated by (mostly German) Jews, who came to without any hostile intent. Jewish doctors see patients, Jewish friends come to call, Jewish colleagues of her father offer warnings of things to come, and Arabs patronize Jewish cafes. All this recalls a time, so very long ago, when it was possible to imagine a future thoroughly unlike that which actually unfolded. I could not help thinking as I read these memories, What if these gentle Jews had won the day in their community instead of those who actually created and set it on the aggressive course that has brought us to the bloody impasse of present times?
In the second part of her book, we follow Karmi and her family to , where she struggles to discover her identity. Throughout her adolescence and early adulthood she is engaged in a perpetual war of identities, unable to accept either her Palestinian past—which includes her situation as a girl—or the permanency of her status as an outsider. After the crisis and the 1967 war, however, her Arab heritage lays inexorable claim on her. Reluctantly, and only in deference to her father, she heads for a career in medicine, and then defies family and tradition to marry an Englishman. Almost inevitably, one feels, her marriage fails, and she is left once again with the unfulfilled need for a life in which all the strands of her identity can live harmoniously.
In the last section of the book, Karmi fully embraces her Palestinian identity. In 1972 she founds Palestine Action, which concentrates on disseminating information and lobbying those in power. She travels around the Arab world, meets with Yasir Arafat in in 1973, and visits refugee camps and guerrilla training grounds. All of this, however, in the end still leaves her dissatisfied. At last, in 1991, she makes her first pilgrimage to , now , in search of her lost past. It is only in that a Palestinian can find peace.
The
of the title is the beloved maid in the Karmi family’s household. The attempt to recover her past proves futile and leads Karmi to the gloomy conclusion that her has been irrevocably replaced with another people’s reality. Just as hopelessness engulfs her, however, the sound of the adhan reminds her of the indelible ties that bind this place to Arab history. At last, she finds hope for the future. The sound of the adhan is “[t]he unmistakable sound of another people and another presence, definable, enduring and continuous. Still there, not gone, not dead” (p. 446).

Jean Said Makdisi, a writer and researcher, is the author of Beirut Fragments: A War Memoir (Persea Books, 1990) and Teta, Mother and Me: An Arab Woman’s Story (Saqi Books, forthcoming).