Said: Freud and the Non-European 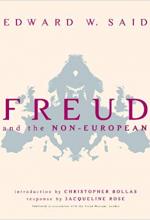 This extended essay derives from the text of a lecture that Edward Said gave at the Freud Museum of London in 2002. With characteristic elegance and economy of prose, Said outlines the implications of Freud’s final speculations on the problem of identity for an ethics of human differences generally and for the Israeli-Palestinian conflict more specifically. Working from the last text Freud wrote, Moses and Monotheism, Said elaborates a vision of identity that never is whole or fixed but necessarily contains foreign elements at its core. For Freud, it is the claim that Moses was an Egyptian that does this work for Jewish identity. Moving outside the text of Moses and Monotheism, Said invokes Freud’s famously ambivalent relationship to his own Jewish identity as supplementary evidence for the wounded but necessary and inclusive nature of individual and collective identity for Freud. Said argues that through mandating a restricting, excluding Jewish character for the sliver of land—Palestine—in the eastern Mediterranean, “Israeli legislation countervenes, represses, and even cancels Freud’s carefully maintained opening out of Jewish identity toward its non-Jewish background” (p. 44). In addition to legislation, Israeli archaeology becomes the terrain upon which the transformation of multiple peoples, histories, and relationships within the region into a narrative of singular identity is rendered visible. Implicit in this invocation of Freud’s final thoughts on individual and collective identity resides a more generalizable critique of the psychic life of nationalism and its possibility of resolution: “Freud’s meditations and insistence on the non-European from a Jewish point of view provide, I think, an admirable sketch of what it entails, by way of refusing to resolve identity into some of the nationalist or religious herds in which so many people want so desperately to run” (p. 53).
In an exquisitely nuanced response, Jacqueline Rose suggests, “that the fixity of identity—for Freud, for any of us—is something from which it is very hard to escape—harder than Said for wholly admirable motives, wants it to be” (p. 74). For her, this difficulty arises “—not only because as Edward Said puts it—history represses the flaw, but because the most historically attested response to trauma is to repeat it” (p. 77).
For Said, Freud’s text allows for visions of political and social collectivity that can contain robust differences by acknowledging that identity is never what it seems. Said’s reading does so without falling into the liberal pieties of tolerance and compassion. In this brilliant reading of Freud, Said pithily performs and recuperates what he has elsewhere termed “contrapuntal reading.” Instead of berating Freud for his historical blind spots—most obviously his sustained invocation of the shadowy figure of the primitive and “no thought of Europe as a malevolent colonizing power” (p. 50), Said uses his own position as a reader of Freud in Freud’s future to use Freudian ideas and strategies to stage an intricate dialogue between Freud’s time and our time. On the one hand, this position is scrupulously loyal to Freud. Said writes,
“[Freud] thus lends himself especially to rereading in different contexts, since his work is all about how life history offers itself by recollection, research and reflection to endless structuring and restructuring, in both the individual and collective sense” (p. 27). On the other hand, Said must extend these Freudian insights into arenas unimagined by their author: “I very much doubt that Freud imagined that he would have non-European readers, or that in the context of the struggle over Palestine, he would have Palestinian readers. But he did and he does” (p. 43). Thus in Said’s reading, we see a parallel performance of the central argument of the complex interweaving of identity and difference in the late Freud and its powerful implications for the history and future of Palestine and Israel.
This remarkable essay reveals Said at the height of his intellectual powers. His scholarly and political interests illuminate each other without compromising the integrity of either. Freud and the Non-European is essential reading for anyone interested in the political utility of psychoanalytic modes of thought, in thinking beyond the current impasse of competing nationalisms in the Israeli-Palestinian conflict, and for scholars, activists, politicians, and public intellectuals grappling with the limits and possibilities of identity-based social and political movements. As Jacqueline Rose puts it, “Edward Said has paid the most extraordinary tribute to Freud by taking out of his last work a vision of identity as able to move beyond the dangers of identity in our times” (p. 78).

Neville Hoad is an assistant professor of English at the University of Texas, Austin. His articles have appeared in Postcolonial Studies, GLQ: A Journal of Lesbian and Gay Studies, Repercussions, the Voice Literary Supplement, and numerous anthologies