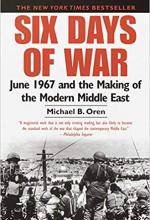 Michael B. Oren
Six Days of War: June 1967 and the Making of the Modern Middle East
2002
-
English
Purchase
Full text:

Michael Oren paints with a pointillist's brush the confusion of events that profoundly changed the Middle East in the 1967 war. Oren and his small army of research assistants have scoured the archives from Washington to Moscow and places in between to vacuum up every bit of public information about events leading to the war and the war itself. The result is a book that is as disappointing as it is comprehensive.
Six Days of War gathers together the documents released after the thirty-year declassification period as well as the many memoirs written by the participants. It is a rich lode of information, and Oren organizes this mass into a fascinating and very readable tale of leaders and their aides struggling to understand fast-moving and perilous events. His thumbnail sketches of the leading players, especially Israelis, are exquisite chiaroscuros. These aspects explain the book's appearance for seven weeks on the New York Times best-sellers list.
As only one of a number of examples, Oren captures the indecisiveness of Prime Minister Levy Eshkol by relating a popular joke: When asked whether he wanted coffee or tea, Eshkol replied, "Half of both" (p. 50). He notes that Eshkol called himself in Yiddish "Shimshon der nebechdikker"--Samson the nerd--meaning Eshkol knew Israel was militarily invincible and morally vulnerable at the same time (p. 18). Americans dealing with him might have been wise to remember another of Eshkol's favorite sayings: "Sure I promised, but did I promise to keep my promise?" (p. 50).
Oren's problem with his trove of information is that he is surprisingly reluctant to come to conclusions about what it all means. In fact, early on he confesses, "[I]t may be useless to try to pinpoint the cause or causes of the Middle East war of 1967" (p. 2). Yet this is one of the two paramount questions of the period. The other question is whether Israel received a "green light" from the United States to start the war.
From Oren's own narrative the answers are obvious, although he refuses to state them clearly. Israel received Washington's green light, and it started the war because it was sure it would win, as was the United States. In fact, he quotes Supreme Court Justice Abe Fortas and UN Ambassador Arthur Goldberg, both Zionists, as privately suggesting to Israel that it go to war. And he says of Mossad chief Meir Amit's trip to Washington on the eve of war to sound out its views of Israel starting the fighting, "Amit would fly home more than ever convinced that Israel gained nothing by waiting, except compounding its losses" (p. 147). What does that mean except that Washington did not strongly oppose the war (i.e., the green light Israel was seeking)?
Yet Oren resorts to invoking a rather silly simile to explain his inability to be decisive: "Much like the hypothetical butterfly that, flapping its wings, gives rise to currents that generate a storm, so, too, might small, seemingly insignificant events spark processes leading ultimately to cataclysm" (p. 2).
On one point Oren is decisive: Israel's attack on the USS Liberty spy ship and Washington's subsequent media clampdown about the deadly incident. He insists that the attack was a mistake, although officials from Chief of Naval Operations Admiral Thomas Moorer, Secretary of State Dean Rusk, and on down strongly believed it was deliberate. Oren writes, "While the IDF could have easily sunk the Liberty, the fact remained that it did not; it ceased firing the instant the mistake was realized, and offered to assist the ship" (p. 171).
It is absurd, of course, for Oren to claim that Israeli forces could have "easily sunk" the Liberty, since they had tried just about everything to do exactly that in a brutal assault that included strafing the ship, napalming it, and sending five torpedoes at it, causing 34 deaths and 171 injuries. They hardly could try more than that. Oren puts great weight on the fact that Israel then officially notified Washington that its forces had made a mistake, as though Israel's word were good. Yet, he already had revealed that Eshkol had deliberately lied to President Lyndon B. Johnson by claiming that Egypt had started the war (p. 169).
Much of the cause of Oren's indecisiveness stems from his loyalties, which clearly lie with Israel, where the American-born author is a citizen. He is a reserve officer in the Israel Defense Forces, he was a member of Yitzhak Rabin's government, and he is currently a senior fellow of the Shalem Center, a group dedicated to Israeli interests that Oren acknowledges lent its "auspices" for the research and writing of his book. Were he a more independent writer lucky enough to have the mountain of research gathered for his book, he may have been able to provide a more incisive and truthful rendering of the 1967 war.