Gal and Gottschalk, eds.: Beyond Survival and Philanthropy: American Jewry and Israel 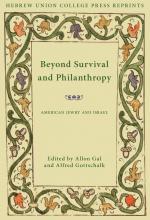 This book comes out of a 1996 conference on the crisis in relations between American Jews and Israel.  The editors are Allon Gal, who directs Ben-Gurion University's Center for North American Jewry, and Alfred Gottschalk, professor of Jewish intellectual history at Hebrew Union College. Twenty-eight contributors are officials of pro-Zionist organizations or academics at Israeli and U.S. Jewish schools. Two of them, Steven Cohen and Charles Liebman, express their collective problem:
American Judaism takes its . . . cultural environment as a given . . . these values tend to undermine American Jewish ties to Israel. . . . American Jews, as a whole, are only comfortable in supporting Israel when Israeli policies are perceived as consistent with universalist and moralist values. . . .
When unconstrained by Jewish particularist values, universalism undermines the idea of a special relationship between American Jews and Israel. . . .  After all, if all people are to be treated equally without regard to race, religion, national origin, sex, and most recently, sexual preference, how can American Jews feel totally comfortable in maintaining a special relationship with, let alone granting preference to, Israelis? (pp. 12-13)
Worse yet, U.S. Jews "have such difficulty appreciating the virtual monopoly the Orthodox exercise over the meaning of Judaism in Israel" (p. 14). The diagnosis is scientific. But with dozens of mediocre "Responses" to Zionism's demographic impasse, the book becomes a sociological caricature of the Talmud's piling on of commentaries.
New Jersey's Jewish News editor David Twersky loathes "The tendency to see `Jewish' as too small a category" (p. 111).  But "reestablishing the dialectical relationship . . . between our liberals and the tradition" is just wishful thinking, here or in Israel (p. 115).
America's Jews are its most educated stratum, increasingly science-oriented. Israel has the world's highest percentage of university graduates. Hence, growing percentages in both countries see Zionism and Judaism as intellectual broom closets, precisely because of Israel's "pre-enlightenment, Middle Eastern style compact of religion and state" that Zionism's in-house scholars support or, at most, feebly bemoan (p. 115). Thus, Professor Michael Myers of Reform/Progressive Judaism's Hebrew Union College sees his minuscule sect as "an alternative to secularism and Orthodoxy" in Israel. The "particularist" wants no more than to "shape and implement religious curricula in the secular schools" there. He declares that,
Host cultures, especially that of America, represent a more serious threat to our collective Jewish existence than ever before. Not only are Jews more socially acceptable then ever in the past, but so is Judaism. The problem is that Jewish tradition is seen as narrow and prejudiced the moment it makes any claim to exclusivity, the moment it makes any claim to superiority. (p. 226)
America's religious freedom has taken hold. Ethno-religious particularism of any kind is an intellectual loser in a cosmopolitan United States. A 1995 American Jewish Committee poll found only 22 percent of America's Jews calling themselves Zionists, down from 90 percent in 1948. The City University of New York's American Jewish Identity Survey (2001) declared that only 51 percent of our Jews say their religion is Jewish. Given decades of ever increasing repudiation of Judaism, by now, December 2002, or momentarily, most of the country's Jews will have rejected it. The abandonment of their hereditary religion by our richest and most educated stratum is a major sociological event with immense implications for the United States and the Middle East.
The hockey brawl over the United Jewish Communities' demographic survey of American Jews, partially released in October 2002, partly repudiated, further expresses the Zionist establishment's inability to accept the reality that they irrevocably have lost their own secularly educated youth.  But why are these youths not coming to the Palestinians' side? Most react to Israel's legal Orthodoxy and discrimination against their Judaic sect, or reject religion as incompatible with their science courses. As with former members of other family ideologies, they have no built-in reason, in America, where religion cannot be legally imposed on them, to combat Zionism because they were raised up in it. And, of course, neither the repulsive corruption of the Palestinian Authority nor Hamas's fanatic suicide bombs can appeal to these worldly intellectuals.
In the end, the book's lesson is the opposite of what its writers intended. If separation of religion and state and equality before the law for all, regardless of religion or ethnicity, have defeated Zionism among young educated American Jews, then a democratic secular binational movement in Palestine/Israel, for one democratic secular binational state, from the Mediterranean to the Jordan, at least can hope to defeat Zionism among educated Israelis, young and old.