Massad : Colonial Effects: The Making of National Identity in Jordan 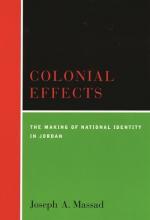 As the title suggests, Joseph Massad's book investigates the relationship between the colonial state and the development of postcolonial identities. The bottom line is that without the creation of Transjordan by Britain after World War I, there would be no such thing as a Jordanian today much less a debate among those living in Jordan about who is a Jordanian. Yet, given the importance of national identity to political rights and power in the Middle East as elsewhere, it is always difficult to see the supporting beams of identity construction. In getting to the bottom line, Massad offers a theoretically informed and highly interesting analysis of the construction of national identity in Jordan.
Massad focuses on three areas-law, the military, and the shifting "other"-in the rendering of a politically useful Jordanian identity. The first chapter, resting on an analysis of nationality laws written by the Mandatory state and later adopted by the national state, is the least successful. His point is simple: By looking at nationality laws, one can see that nationality is adaptive. He complicates his point by adopting a heavy-handed language of deconstruction. His most telling insight in chapter 1 is that there is a gap between malleable popular notions of who belongs and juridical rulings. This turns upside down commonly accepted ideas that national identities are fixed but the law governing them changes. But what reader could possibly appreciate his point about the malleability of popular nationalism when expressed as follows?
Whereas the genetic moment of every national interpellation secures the subsequent claims made by popular nationalism anchoring the political and popular concept of the nation, every retelling of the story of the nation becomes in fact a moment of sublation (incorporation and transcendence), wherein the newly constituted Jordanian identity sublates its predecessor in an interminable process, and whereby the new Jordanian identity is reinscribed as the one that had always already existed as it does today. (p. 48)
It is unfortunate that such writing is prevalent in the first chapter. Some readers may be discouraged and not read further. That would be a mistake, for the rest of the book is written in a more accessible style. It is full of fascinating information and an analysis of the colonial and postcolonial state's production of national identity that should invigorate the field.
Chapter 2 shows how laws have constructed separate spheres of time and place in Jordan for urban men on the one hand and Bedouin and women on the other. Urban men are by definition modern and by law fully autonomous citizens. Bedouin are relegated to the margins of the country and women to their families. They are citizens, of course, but different laws govern their relations with the state, although there have been changes in their juridical status since the adoption of the first Organic Law in 1928. Neither group enjoys the autonomy of urban men and both, perhaps because they have been contained and silenced to a degree, have been turned into symbols of cultural authenticity.
How Bedouin became symbols of cultural authenticity has everything to do with the very peculiar attitudes of Englishmen and the usefulness of such structures of thought as racial purity to maintaining British social structure and imperial power. Massad's most interesting work, starting in chapter 3, is his analysis of Glubb Pasha's shaping of the Arab Legion and adoption of supposedly Bedouin customs as markers of Jordanian identity. His overarching point with regard to the military, developed in chapters 3 and 4, is that it serves a productive role in defining the state and its nationals as well as a repressive role. While the latter may be taken for granted, the former has had some surprising results. Glubb delighted in what he saw as the simple, honest folk of the desert, to which he counterpoised his view of urban men, especially middle-class educated men, as effete hybrids. From Bedouin recruits he fashioned the camel corps that became the signature element of the Jordanian army. He designed the uniforms for his Bedouin troops and chose the red kuffiya that since has become Jordan's wearable national symbol. Massad's analysis of Glubb's role in creating Jordanian "national" culture and its paternalist, authoritarian structure far exceeds any other treatment of Glubb to date. I am not convinced, however, that army service made national actors of the Bedouin. The loyalties of the Bedouin in the army seem to have been fixed on the commander, Glubb himself, rather than on the state. As Massad points out, when King Hussein dismissed Glubb in 1956, some of his troops had to be restrained from interfering on his behalf (161).
In the last substantive chapter, Massad develops the notion of the elasticity of national identity. Here he especially focuses on "the Palestinians, who came to be identified as `other' by the Jordanian regime and its allies [and thus] were instrumental in helping the formation of a Jordanian national self." He is correct, I believe, in identifying the flood of Palestinian refugees to Jordan in 1948 and the incorporation of the West Bank and East Jerusalem into Jordan in 1950 as the catalysts of a specifically Jordanian identity that came to be both felt and acted on. Fifty years on, some in Jordan have adopted an ideology of national identity that excludes longtime residents of the territory, such as Chechens, Circassians, and even the Hashimites themselves as well as Palestinians. "National" markers from food to dress to accent, have been adopted across the spectrum of the population living in Jordan today, created wholesale or copied from the practices of a small portion of the population who might with some historical, economic, and social justification call themselves Bedouin. There is nothing intrinsically harmful about such practices, but the exclusivity of nativists in Jordan and elsewhere today is dangerous, leading in extreme cases to ethnic cleansing. Massad reveals the special pleading and barrenness of the genealogical and ideological underpinnings of Jordanian nativism.

---------------------
Mary C. Wilson is professor of history at the University of Massachusetts at Amherst and the author of King Abdullah, Britain, and the Making of Jordan (Cambridge University Press, 1987).