Bornstein : Crossing the Green Line Between the West Bank and Israel 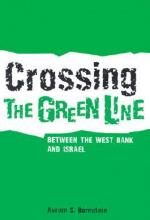 The border is central in the daily life and struggle of Palestinians. This book expands on Rashid Khalidi's assertion that "the quintessential Palestinian experience . . . takes place at the border" (Palestinian Identity: The Construction of Modern National Consciousness [Columbia University Press, 1997], p. 1, and quoted on p. 1 in the book under review). Avram Bornstein analyzes how the "practice of borders" as forms of administrative violence has shaped the political and economic inequalities at the heart of the Israeli Palestinian conflict. Engaging ethnographic accounts of border procedures, labor processes, and cultural practices are the central building blocks he uses to this end.
With a strong focus on labor and production processes, often missing from anthropological accounts, Crossing the Green Line looks at how shifting border practices have produced an apartheid system through which Israelis control and subordinate Palestinians. Bornstein details the patterns of openings, closures, tightenings, bypasses, and changes in procedure and staff, particularly those that accompanied the political transformations of the 1990s. He traces these patterns along the Green Line but also within the West Bank, along the border with Jordan, and in access to countries of the Gulf.
This analysis is largely presented in the form of narratives about individuals from a village in the Tulkarm district. Abu Samud and his erratic construction work inside Israel, 'Alia and her sewing for Palestinian textile subcontractors, Abu Hasan and his border garage, and Im Samud and her proud home bread making-all give a personal and human dimension to economic and political histories. The author appears in these stories: He worked with Palestinians in construction, greenhouse farming, sewing, and auto repair. These combined narratives of work and fieldwork provide insight into the intricate processes of labor and the role the border plays in producing its vulnerabilities: finding work, access to work and permits, keeping jobs, getting paid, access to benefits, and so forth. The injustices and difficulties expressed elsewhere in dry statistical terms come to life here vibrantly and with nuance.
The target audience for the book is not area specialists; it appears as part of a series on the ethnography of political violence. This, together with the book's engaging narrative form, make Crossing the Green Line a useful resource for undergraduate students-both of the region and of border studies and transnational migration more generally.
The author had more limited access to women laborers. He uses this very limitation to map how the gendered and national boundaries that affected his access also affect women's labor, its conditions and rewards. He argues that "Women were disciplined by the border in quite a different way from the men who crossed as day-migrants," because the border posed a moral rather than physical danger to them (p. 80). This is an argument to which I am sympathetic, but additional evidence could be marshalled to make it more persuasive.
Indeed his larger, fascinating point about culture and the border-that Palestinians shape "community within and against the borders imposed on them" (p. 130)-could be developed further. Bornstein argues that the flexible category of customs and traditions, often strongly gendered, is used by West Bankers to distinguish themselves from Palestinians across the Green Line and to connect homeland to diaspora. He needs, however, to explore in detail the important questions this argument raises concerning its relationship to the economic and political inequalities he identifies earlier, the degrees of political convergence across borders, and the pressures such uses of customs and traditions create on particular groups.
Bornstein writes that the home of his adoptive family in the northwestern West Bank village is "the center point from which I was allowed to see and experience the border in daily life" (p. 17). His perspective is shaped by this small northern rural location-a location and perspective frequently marginalized in accounts of Palestine. This is a source of great strength, bringing into focus the tyranny of the border and the struggles of labor. But this center point, like most center points, also carries certain limitations-namely, "unfocusing" Palestinians on the other side of the Green Line. He describes "Israeli Arabs"-a surprising term given the book's politics-as northern West Bank villagers sometimes describe them: Westernized, overly democratic, and free from moral constraint (p. 101). From this one-dimensional account, one hardly would expect to find similar Palestinian deployments of customs and traditions, not to mention nationalism, within the 1948 borders. Yet, the binaries that Bornstein attributes to different sides of the Green Line exist within both sides of the border-often expressing urban-rural, class, and religious tensions.
At one point the book describes two lines in the landscape, the Green Line and a "clandestine" path that workers were allowed to carve out of a hillside, around a border checkpoint, and across the Green Line. Later, the Israeli military carved more lines-a series of paths that zigzagged across the first two, to allow Israeli jeeps to patrol them. More recently, plans to build a border fence have made headlines. This morphing network of lines, and Palestinians' efforts to navigate them, graphically illustrate the book's strong central argument: the complicated, changing, and economically powerful strategies of borders.

--------------
Rhoda Kanaaneh is assistant professor of anthropology at American University, Washington, DC, and author of Birthing the Nation: Strategies of Palestinian Women in Israel (University of California Press, 2002).