Talhami: Syria and the Palestinians 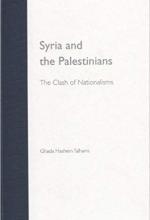 Ghada Talhami focuses in this book on Syrian-Palestinian relations throughout the twentieth century. Her goal is to offer an explanation for the "absence of a clear view of Arab nationalism and Palestinian particularism" (p. viii) among Syrians and Palestinians, an absence that ultimately led to their clash.
The first five chapters of the book provide a rather familiar historical overview of Syria, Palestine, and the interaction of the political elite in the context of late Ottomanism, Faysal's short-lived kingdom, the mandates, the 1948 war, the development of the PLO under Ahmad Shuqayri and (later) Yasir Arafat, the 1967 war, and the conflict in Lebanon. Since the book lacks an introduction and only very briefly states its objective in the preface, the reader is left without a theoretical mapping until reading almost three-fourths of the text--and not before encountering such sweeping pronouncement as ideology is "the most important facet of political life in the Arab world today" (p. 153) and "[n]o understanding of the passionate intensity of [Syrian-Palestinian conflict] can be explained merely by reference to policy" (p. 154). Nevertheless, Talhami's presentation demonstrates what accounts most for our understanding of this conflict: Since the 1967 defeat, and certainly since Arafat emerged as head of the Fatah-dominated PLO in 1969 and Hafiz al-Asad as president of Syria in 1970, the PLO has refused to be controlled by Syria (or any other Arab state) while managing to play one actor against another, and Asad never deviated from his simple geostrategic and realpolitik views. Furthermore, she concludes, "right from the start, Syria's defense of its own interests in Lebanon contradicted the basic tenets of pan-Arabism and Ba`thist ideology" (p. 110).
Talhami's attempt to place the historical events of Syrian-Palestinian relations within a conceptual framework are less than satisfactory, for she merely provides an historical recapping of the Syrian Social National party, the Ba`th party, the Arab Nationalist Movement, and Nasirism. While it is useful to evaluate the ideological differences of these currents within the context of Arab nationalism and the Palestine question, they simply have outlasted their explanatory power to account for the clash of Syrian and Palestinian nationalisms. Indeed, it was perhaps only in the mid-1960s--tellingly, before the reemergence of Palestinian nationalism--that such formulations were able to shed light. More recently, another ideology, that of the rising Islamist groups, would seem to warrant inclusion, and doing so would not necessarily have compromised the parsimony of the author's argument.
What could explain this methodological overreach is the author's apparent conflation and deemphasis of an important distinction between the political (in terms of ideologies and parties) and structural (the Arab League, its summits, etc.) dimensions of Arab nationalism. Talhami announces at the outset that her book "brings home the message elucidated even in the literature of the Arab League of States--namely, that League members constituted several states but only one nation" (p. viii) and that it shares the Arab League's "perspective on relations between Arab states and how to substitute cooperation and coordination for the imperative of unification" (p. 154). While the dispute over the death of Arab nationalism in the political sense is restricted to time of death, the Arab League not only has respected the supremacy of sovereignty in the face of unity, but also has shown a dismal record in achieving the less ambitious cooperation/coordination goal and an utter impotence toward the Palestine question, as has been manifested in live television coverage of the two Arab summits held to "support" the al-Aqsa intifada. Such scenes show that the death certificate for pan-Arabism is not confined to Western scholars, as Talhami suggests.
To appreciate Talhami's insistence on framing her approach within Arab nationalism despite its weak explanatory value (as much of her presentation shows), this book needs to be read as a narrative that longs for and mourns the geographic coherence of Greater Syria that was fragmented by colonialism and Zionism. Paradoxically, this is where the strength of the book lies: Reading it on this level, it accurately, and perhaps normatively, corresponds to the view from ("northern" toward "southern") Syria as practiced by Asad's realpolitik in the face of ever-narrowing options, particularly in the wake of the Soviet Union's demise and the "peace process" of Pax Americana, as is illustrated in the last two chapters of the book.
The author does not reach new conclusions about the dynamics of Palestinian nationalism and Palestinian-Syrian (and other Arab) relations beyond the ideas previously advanced by such Palestinian scholars as Rashid Khalidi, Muhammad Muslih, or Yezid Sayigh. Nevertheless, Talhami's use of archival and secondary Arabic sources is a welcome contribution to a Western scholarship that otherwise still underutilizes them.

-------------------
Fayez Hammad is a doctoral candidate in political science at the University of Southern California.