Jabra: In Search of Walid Masoud 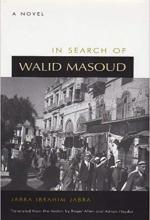 "If only there were an elixir for the memory, something
that could bring back events in the order they happened,
one by one, then turn them into words that would
cascade out onto paper!" (p. 1)
These opening lines of the late Palestinian author Jabra Ibrahim Jabra's 1978 novel, In Search of Walid Masoud, initiate a journey through the psychic and political landscape of a quixotic Arab modernity that is, like the novel's central character, intensely present and yet irretrievably lost. The theme of loss and the search for rebirth through memory and the redemptive power of writing is a recurring one throughout Jabra's large and varied literary oeuvre, which includes poetry, drama, criticism, and fiction published over half a century. This thematic preoccupation is partly rooted in his own biography. Like Walid Masoud, Jabra was born in Bethlehem in 1920, grew up in Jerusalem and settled in Baghdad after the Nakba of 1948. His writing has consistently attempted to retrace that long journey back to its origins in Palestine.
The sudden and mysterious disappearance of Walid Masoud, a celebrated Palestinian intellectual and political activist living in Baghdad since the 1948 Arab-Israeli war, becomes the occasion for a complex narrative odyssey in which a group of characters from Walid's brilliant inner circle of friends--writers, artists, and businessmen--attempt to reconstruct the truth behind his elusive character through a series of evocative individual monologues. The result is a dense and lyrical exploration of the ambiguous relationship between memory, desire, and a conception of identity that is defined as being both profoundly personal and urgently historical. The "search" for Walid Masoud is constructed around multiple narrations and textual fragments of letters, diaries, tape recordings, memoirs, and snippets of metafiction. In setting out to recapture or reread some aspect of Walid's life and personality, the novel's characters inevitably descend into a vertiginous process of self-examination that brings them up against the dark center of absence within themselves. Walid's final garbled words, discovered on the tape left behind in his abandoned car, herald the stumbling process of self-discovery of the novel's characters and the narrative structure of the text itself:

. . . no no no that's not what I wanted to say even
though I did want to say some of it when everything
I've already said is merely marginal and the main
text is missing so let me try again. (p. 20)

Jabra's fiction is rooted in the affluent urban landscapes of a cosmopolitan Arab bourgeoisie. The efflorescent Baghdad of the 1950s and 1960s is just such a landscape, enveloped in a light mist of ever-present nostalgia, its glamorous social elite constantly circling through a series of sexual, emotional, and intellectual entanglements that are played out in the expansive gardens and opulent drawing rooms of each other's homes. And yet, like the novel itself, they all are haunted by a central sense of loss--a profound absence, which, like the missing character of Walid Masoud himself, becomes an overarching metaphor for the incommensurability of "truth" and the fragile mosaic of human experience. The catastrophic loss of Palestine is woven into this mosaic through the histories of both Walid and his son, Marwan, as martyrs of the Palestinian resistance and the wider Arab Nahda. The construction of an Arab modernity, the liberation of Palestine and the search for personal meaning all are linked in the novel through the creative possibilities of writing as a creative and recuperative act.
In Search of Walid Masoud is a grandly conceived novel of ideas and a powerful exploration of desire and betrayal that contains passages of great lyricism and passion. Roger Allen and Adnan Haydar's masterful translation preserves the lyricism of Jabra's prose and the fluid, magisterial sweep of his narrative style. Syracuse University Press' Middle East Literature in Translation series, edited by Michael Beard and Adnan Haydar, has published translations of fiction and criticism from Egypt, Iran, Turkey, and Francophone North Africa (a translation of Abdelfattah Klito's L'Auteur et Ses Doubles is forthcoming). In Search of Walid Masoud is the second Arabic novel to be published in the series. It is certainly an invaluable addition to the steadily growing corpus of major Arabic fiction available in English.