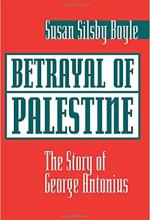 The story of the multifaceted Arab resistance to Zionism is virtually unknown in the United States. Yet, Arabs resisted almost from the moment the Balfour Declaration was proclaimed, and their early leaders were every bit as intelligent and determined as Chaim Weizmann or David Ben-Gurion. These heroes of the Palestinian national cause need to be remembered not only for the brave individuals they were, but also so they might serve as role models for future generations of Palestinians. Susan Boyle's new political biography of George Antonius serves this purpose. In a well-written and deeply sympathetic effort, she traces the political career of this brilliant Arab intellectual, diplomat, and mediator against the backdrop of Great Britain's abandonment of the Arabs and embrace of the Zionist cause following World War I.
Antonius was born in Lebanon in 1891 into a Greek Orthodox family. He received an excellent Western education, attending King's College, Cambridge, from 1910 to 1913. He then went to work for British colonial administrations, first in Egypt and then in Palestine. He soon established a reputation as a translator and effective mediator between Britain and its Arab colonial constituencies. In the early 1920s he worked at the Department of Education in Mandate Palestine, eventually taking Palestinian citizenship.
Antonius proved so competent at his post that he quite literally embarrassed some of his bosses--he was an Arab working in an inherently racist colonial bureaucracy. His superior at the Department of Education, while outwardly fond of Antonius, constantly conspired to replace him with an Englishman. Others felt uncomfortable that this "wog" (Westernized oriental gentleman) was better educated, smarter, and, thanks to a well-made marriage, wealthier, than they.
Boyle makes clear that, from the British perspective, there was a more fatal flaw in Antonius's demeanor. He was a relentless reformer. Almost everything that he did aimed at making the Palestinian people better schooled, more self-reliant, and thereby ready for independence. As it became obvious that the British were betraying their duty to lead Palestine to independence through the Mandate system, Antonius's understanding of the purpose of his job came into sharp contrast with the aims of his superiors. It was a situation that was bound to prove intolerable to a principled man, and he resigned from the government in 1930. From that point until his unexpected death in 1942, he worked to help the Palestinians diplomatically argue their case for independence and democracy.
Antonius was a rational man with a deep and abiding faith in the rationality of others. Boyle emphasizes this aspect of his character but without any hint that this faith, applied in practice within the context of Mandate Palestine, might have been naive. For instance, there is the author's wonderful description of Antonius debating Prime Minister Ramsey MacDonald and most of the British foreign policy establishment at the 1939 London Conference on Palestine. "Antonius's command of the facts shattered the illusion that the Palestinians had no case" (p. 15). MacDonald privately acknowledged that this was so but then proceeded to ignore the Palestinian case anyway. For the British (and the Americans), historical (as opposed to Biblical) evidence and humanitarian rights never were as persuasive as Zionist political influence and myth making. The British only partially conceded Palestinian rights out of fear that the Arabs might turn on them as World War II approached.
Antonius was, of course, too smart not to see that reason based on a principled sense of justice often fails to win. Yet, being a basically good man who had faith in common sense, he was addicted to reason. Even sensing that his arguments might win skirmishes but never the war, he could fight no other way. Was this a strength or a weakness? If there is a flaw to Boyle's book it is that she never takes up this question. In Antonius's world all the cards were stacked against reason and human rights for the "natives," and "justice" was what served the empire's interests most expediently; violent confrontation was inevitable. Antonius, by his own example, could uphold the integrity of superior values, but he could not win through these values alone.
Alas, Palestine's fate has not gotten any better since his time. For Palestinians, the forceful imposition of an expansive colonialist state, religio-ethnic discrimination, and callous disregard for human rights still prevails. While the Zionists no longer are allied with the British, they have appropriated for themselves an even more powerful ally in the United States. What counts in shaping U.S. policies is not evidentiary logic, reasoned humanitarianism, or the principled sense of justice of men like Antonius, but rather the political clout of pro-Israeli lobbies such as the American Israel Public Affairs Committee (AIPAC).
The Zionist-influenced media has created the average American's view of Palestine. Like Plato's cave dweller, cultural walls reflecting racial, religious, and communal shadows that are mistaken for venerable truths bound the American reality. Domestic ideals such as democracy are believed, in true Orwellian doublethink fashion, to guide foreign policies that promote their opposites. Thus, Americans can believe they are promoting democracy while Washington overthrows elected governments, wages wars against popular movements, and supports dictatorships and "rogue nations" that defy UN resolutions and international treaties at the expense of Palestinian rights.
What would George Antonius think of it all? He probably would not abandon his search for real justice achieved though reasoned argument because he always abhorred violence. No doubt, he would keep on doing what so many other intellectually inclined "freedom fighters" must do--represent the hope inherent in the humanitarian impulse in an ever more barbaric world.