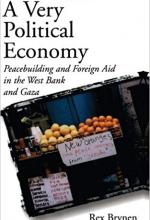 Rex Brynen, an associate professor of political science at McGill University, has written an authoritative and very fine work on foreign aid to the West Bank and Gaza. His is a comprehensive, intensely researched, and well-written study that is rich in technical detail and thoughtful in analysis. The author reviews the history and assesses the impact of foreign assistance to the West Bank and Gaza during the Oslo period, starting with the 1993 donors' conference in Washington through the election of the Barak government in May 1999. He examines the context of Israel's occupation of the West Bank and Gaza prior to Oslo and preexisting patterns of donor aid. This is then followed by four meticulously detailed chapters dealing with the mobilization, coordination, delivery, and allocation of assistance and many of the problems and complexities thereof. His research addresses the following questions (among others): "To what extent did the deterioration in the peace process and the decline of the Palestinian economy cast doubt on the efficacy of donors' efforts? What were the shortcomings of aid, whether in terms of resource mobilization, donor-donor and donor-PA coordination, or project selection and implementation? To what extent were these shortcomings unavoidable--that is, structurally and largely unalterably embedded in the social, economic, and political context of the territories--and to what extent might more effective models and mechanisms be found? . . . What trade-offs have been involved? And what are the social and political--as well as economic and developmental--implications of all this?" (p. 6).
Brynen does a very good job of answering these questions and raising others of equal significance. He correctly concludes his study by saying, "Without international assistance it is doubtful whether the Palestinian Authority--or the peace process--would have been around to see the day" (p. 229). There should be no doubt that without foreign aid, the weakened Palestinian economy would have grown even weaker than it did during the post-Oslo period, and the terrible crisis currently engulfing the area might have begun sooner. This brings me to the only real criticism I have of Brynen's book, the assumption that seems to be implicit in his argument that with the initiation of the Oslo peace process, Israel's occupation of the West Bank and Gaza in fact was ending and that peace, particularly under a Labor-led government, was a real possibility. (In the earliest days of the Oslo process, the donor community clearly believed this to be true.) I do not agree.
Oslo failed for many reasons but fundamentally because Israeli occupation continued structurally unaltered, with Israel retaining full control over Palestinian life and the economy: borders, resources, and the factors of production. This was as much the case (if not more) under Labor governments as it was under Likud. Oslo was not about peacebuilding or transitioning to peace; it was about finding a better way to insure Israeli security and preserve Israeli interests in the occupied territories. One illustration of this is the dramatic expansion of Israeli settlements and a near doubling of the settler population in the West Bank and Gaza between 1993 and 1999. Political failure and economic decline were embedded in the Oslo process from the beginning and deepened, over time, by donor unwillingness to challenge Israeli policy (e.g., closure and other restrictive measures), politically or economically, no matter how injurious to Palestinians or to the peace process. At best, and despite internal protests to the Israeli government (pp. 124-26), donors tried to mitigate or offset the damaging effects of Israeli policy in an effort to keep the so-called peace process alive.
Failure was made even more inevitable by various constraints within the Palestinian sector, which Brynen addresses, and perhaps more importantly by a strategy enshrined in the interim agreements that pursued economic change ahead of a political settlement. Hence, donor efforts directed at promoting peace through development assistance, a Sisyphean task under the best of circumstances, were bound to fail within the Oslo construct. This point notwithstanding, Brynen's book is an extremely valuable and important contribution to the literature on Palestinian economic development, the politics of foreign assistance, and the Israeli-Palestinian conflict in general. It is a study from which a great deal can be learned.

--------------
Sara Roy is a research associate at the Center for Middle Eastern Studies at Harvard University and author of The Gaza Strip: The Political Economy of De-development, 2d ed. (Institute for Palestine Studies, 2000).