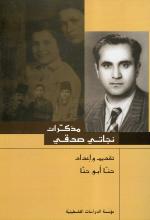 This essay reviews the colorful life of Najati Sidki, a Palestinian communist who, during his various long sojourns in the Soviet Union, came to know the major communist figures of his day (including Joseph Stalin), and who also fought in the Spanish civil war. The essay is accompanied by long excerpts from Sidki’s memoirs, including segments on the early days of the communist movement in Palestine, the author’s student days in Moscow at the time of the great ideological debates between Trotskysts and Stalinists, and an amusing account of his years in prison under the Mandate.

Salim Tamari is the director of IPS’s Jerusalem affiliate, the Institute of Jerusalem Studies, and professor of sociology at Birzeit University. The excerpts “Student Days in Moscow” and “Prison Scenes” were translated by Joseph Massad.