Meriwether and Tucker: A Social History of Women and Gender in the Modern Middle East 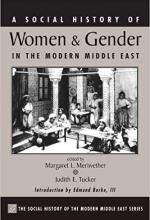 In the past several years, numerous excellent studies on Middle Eastern women have been published. A wonderful addition to this line is A Social History of Women and Gender in the Modern Middle East, a collection of articles written and edited by well-known scholars in the field. This volume, coedited by Margaret L. Meriwether and Judith E. Tucker, is the second in the Social History of the Modern Middle East series, which is under the general editorship of Edmund Burke III. The series and the collection, in particular, have several aims: to focus on nonelites and daily life, to present new perspectives and questions, to attempt to challenge stereotypes of the Middle East, to take an interdisciplinary approach, and to provide teachers, students at the upper division and graduate level, Middle East specialists, nonspecialists, and women's studies scholars with current research in nineteenth and twentieth century women in the confines of one volume.
The volume contains a foreword by Burke, an introduction by Meriwether and Tucker, and five interdisciplinary articles that bring up significant issues in the study of Middle Eastern women. In their introduction, Meriwether and Tucker, in addition to presenting the collection, discuss older and newer areas of study on Middle Eastern women, address the writing of women's history in the Middle East, and offer a quick survey of the history of Middle Eastern women before 1800, focusing on gender, property, religion, and power. Each author in the collection (two historians, two anthropologists, and a political scientist) deals with a major theme and places her well-researched and well-written studies within the context of past and new research on the subject. This approach contributes a great deal to the understanding and appreciation of the themes discussed.
Julia Clancy-Smith's article on women's handicrafts effectively identifies the negative impact of colonialism on women and work in North Africa, especially Algeria and Tunisia, from 1850 to the end of colonization in the post-World War II period. By focusing on urban and rural women's handicrafts, she demonstrates how devastating colonialism, capitalism, and world market forces were and how they negatively affected women's status and economic power, transforming female artisans into a subproletariat.
Mervat Hatem's article on gender and the state convincingly argues that past studies of the nineteenth and twentieth centuries almost exclusively have associated state-sponsored modernization with the progress and empowerment of women and seen "traditional" elements, including Islam, patriarchy, and tribalism as obstacles in the way of the promises of modernization. Ellen Fleischmann traces the emergence of Middle Eastern women's movements by looking at shared concerns, causes, methods, ideologies, and self-identifications, but she does so with the recognition of the diversity and particularities of individual movements. She discusses three thematic stages of development for these movements: (1) the period of debates on women's status and challenges to the status quo; (2) the time when women adopted nationalist discourse and connected it to women's emancipation, with disappointing results; and (3) the stage of state feminism, which came as a result of women's association or conflict with state-building projects. The latter also had negative consequences as feminists were discredited for their association with autocratic states and Westernizing ideologies as well as for the obvious discrepancy between their situation and that of most nonelite women.
Annelies Moors's study of the debates over family law clearly demonstrates how the narrative on family and Islam has changed. Until the 1970s, studies that focused on legal and religious texts saw family relations only in relation to Islamic law and therefore fixed and strictly patriarchal, that is, until twentieth-century legal reforms transformed the family. Since the 1970s, but especially in the past decade, studies have challenged these assumptions, partly by using different sources, like court documents, fatawa (authoritative opinions of muftis), and oral narratives. These studies show the flexibility of Islamic law as well as women's agency and strategies. Also, by placing legal reforms since the 1950s within the context of state building, new studies have questioned the assumption that legal reforms necessarily benefitted women. Moreover, they have gone further by looking at the relationship between legal texts and social practices.
Finally, Mary Elaine Hegland shows through numerous examples how Muslim women, particularly Shi`i women, rework and modify Islamic practices and rituals as well as their place in society. By giving these practices new significance, they begin to come to terms with their own religious and social needs while at the same time remaining within the confines placed by state and society.
This wonderful collection of articles successfully accomplishes what it sets out to do, namely to challenge stereotypes and present current research on important themes in the history of Middle Eastern women. This volume is of interest and accessible to specialists and nonspecialists alike and would be highly valuable as a supplemental text in a course.

---------------
Houri Berberian, assistant professor of history at California State University, Long Beach, is the author of "Armenian Women in Turn-of-the-Century Iran: Education and Activism," in Iran and Beyond: Essays in Middle Eastern History in Honor of Nikki R. Keddie, ed. Rudi Matthee and Beth Baron (Costa Mesa, CA: Mazda, 2000) and a forthcoming book on Armenians and the Iranian Constitutional Revolution to be published by Westview Press.