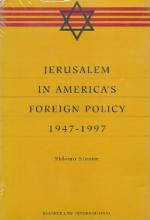 For more than fifty years, the United States has not had a consistent or very definitive policy on Jerusalem. Between 1948 and 1967, when the city was divided under the control of Israel and Jordan, U.S. policymakers sometimes pressed for internationalization of the entire city, according to the 1947 UN partition resolution, and sometimes urged only a functional internationalization of its holy places, but most often tried not to adopt any clear stance, except to avoid recognizing either Israel's or Jordan's sovereignty. In the years since Israel's capture of Arab East Jerusalem in 1967, the United States from time to time has forthrightly labeled this half of the city as occupied territory like the West Bank and Gaza but usually has refrained from such blunt characterizations, either out of fear of the domestic pro-Israeli pressures such statements would be likely to arouse or occasionally in clear deference to Israel's claims to sovereignty, as during the pro-Israeli Lyndon Johnson and Ronald Reagan administrations.
Shlomo Slonim clearly lays out the ups and downs and aberrations of U.S. policy in this new study; were he not so clearly an apologist for Israel, his research would make this book a very useful compendium. To gain an objective picture of the progression of U.S. policy-making on the Jerusalem issue, however, the reader must turn a blind eye to Slonim's obvious Israeli bias and ignore the emotional pro-Israel language he sometimes tries but too often fails to suppress.
As far as Slonim is concerned, the issue of sovereignty in Jerusalem is simple: since 1948, he believes, Israel has always had the legal right to do anything it wants, or can get away with, in Jerusalem because no other legal authority exists there; the British Mandate came to an end, and the UN's proposed international regime for the city was nullified when the UN failed to use its authority to enforce the partition resolution. He regards the state of Israel as the "sole legitimate entity" to be formed in Palestine after the expiration of the Mandate (p. 207) and believes that this alone gives Israel the right to permanent sovereignty over Jerusalem.
Slonim essentially supports rule by fait accompli and repeatedly criticizes the United States for not doing so as well. He appears quite pleased that after the 1967 war the Johnson administration did not recognize an Arab territorial claim to East Jerusalem since, as he asserts, "the unity of the City under Israeli jurisdiction was a fait accompli and precluded any such claim" (p. 369). In other words, anything that Israel can conquer and occupy belongs by right to Israel. He is highly critical of subsequent administrations for not following this position and for never adopting a clear and consistent position on Jerusalem. The lack of clarity, he says, tends to foster the false expectation among Palestinians--what Slonim calls "a chimerical mindset" (p. 375)--that someday they might gain sovereignty over East Jerusalem. He is fond of that old shibboleth that the United States, by not always supporting Israel wholeheartedly, encourages Arab intransigence and radicalism. A U.S. policy of neutrality, he says, "only breeds false hopes and makes the problem less tractable" (p. 374).
Slonim recognizes only Israeli claims to Jerusalem and Jewish history there. He denigrates Muslim history in the city, implying that Jerusalem has never been of particular importance to Muslims (and indeed does not bother to list the words "Muslim/Moslem" or "Islam" in the index). He is so blindly one-sided, in fact, that he invokes the principle of self-determination to justify Israel's right to sovereignty in Jerusalem, on the basis that it has had a Jewish majority for a century, without any apparent recognition that if self-determination on the basis of majority status truly meant anything in international law and politics, Israel never would have gained sovereignty in Palestine in the first place.