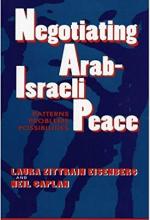 Although this examination of negotiations between Israel and its Arab neighbors surveys events covered in several other works, the approach here is unique. The authors, who previously have written extensively on the subject, present case studies, with supporting documents, of the 1977-79 Camp David parleys, the 1983 Israel-Lebanon agreement, the 1987 Hussein-Peres London accord, the 1991-93 Madrid and Washington talks, the 1994 Jordanian-Israeli treaty, and the current Israeli-Palestinian peace process. In each case, seven historical or background factors are reviewed: previous experience of negotiating together, the variety of purposes and motives for entering negotiations, questions of timing that affected decisions to enter or refrain from negotiations, the status or relative power positions of negotiating partners, the effect of third-party involvement, and psychological factors affecting both leaders and followers of the parties involved. The thesis of the book, state the authors, "is that an application of our historical model to ongoing (and future) Arab-Israeli negotiations will clarify the forces at work behind the headlines" (p. 144).
The importance of previous contacts is underscored as demonstrated in the negotiations between Israel and the countries of Egypt, Jordan, and Lebanon. However, the dearth of contact between Israel and the Palestinian establishment contributed "substantially to the easy demonization of the other, creating a psychological obstacle to peace of tremendous import" (p. 105). Previous contacts or familiarity with the enemy, however, do not necessarily guarantee successful negotiations. The record shows, the authors observe, that many times such contacts "only clarified for the protagonists just how far apart, even irreconcilable, their positions really were" (p. 18).
Asymmetry in status between Israel and its negotiating partner is not necessarily to the former's advantage. Although Israel attempted to dictate the terms of the 1983 agreement with Lebanon, the later's weakness and vulnerability to Israeli pressure only mitigated against Lebanon's ability to fulfill the treaty's obligations, a case in which the operation succeeded but the patient died. Until now, the asymmetry in power between Israel and the Palestinians also has been more of a liability than an asset.
While the search for peace may be an honorable objective, the authors take a skeptical view of the purposes and motives of the partners in several instances. For example, in the Camp David negotiations both Egypt and Israel based their "peace" calculations on a desire to achieve wider goals. Both sought to impress the United States with a view to securing material or other benefits from the Americans. "Sadat hoped to demonstrate the futility of traditional Arab belligerence and reassert Egyptian regional leadership" (p. 30) vis-à-vis the rejectionist stance of his rival, Syrian president Hafiz al-Asad. Lengthy negotiations often reflect historical patterns "none of which was the quest for an honorable and mutually satisfying peace" (p. 47).
The reluctance of Israel's Shamir government to participate in the 1991 Madrid Conference was all too obvious. Shamir's attitude "eloquently illustrated the historic pattern whereby reluctant protagonists have felt forced to give the appearance of being flexible and wanting to negotiate--regardless of the intractability of their positions and/or their distaste for their negotiating partners" (p. 80).
Although the authors take a highly critical view of many aspects of the negotiations they examine, they refute those who dismiss the "peace process" as a disappointing illusion. Lessons to be learned from the cases they present suggest the importance of gradualism "and the sometimes useful, sometimes dangerous, role of ambiguity, or 'constructive obfuscation'" (p. 128). Peace and normalization are slow, shaky processes requiring the healing of psychological wounds and the reversing of negative stereotypes. They believe that rather than a grand comprehensive solution to the Arab-Israeli conflict, the objectives of peace negotiations can be attained through a long-term step-by-step process. The Camp David, Madrid, and Oslo negotiations all underscore the validity of this observation. In each case, preliminary understanding was the foundation for further continued negotiations. Both the Madrid and Oslo meetings initiated processes that have yet to be concluded and prove the validity of the authors' optimism. They are not discouraged by the three-year interlude of Israeli prime minister Benjamin Netanyahu, seeming to believe that many of the historical obstacles that had been overcome or diminished before Netanyahu but reasserted themselves after 1996 can be overcome again by new approaches that will triumph over old habits. However, they conclude that future historians must answer the questions they raise.
The lengthy appendix of sixteen documents (each related to a case study), the extensive reference notes ending each chapter, and the bibliography are valuable assets that enhance the value of the book as a teaching tool. Although useful as a text, the book also offers a provocative historical analysis for the informed.

-----------------------
Don Peretz, professor emeritus of the State University of New York, Binghamton, is the author of Palestinians, Refugees and the Middle East Peace Process (United States Institute of Peace Press, 1993).