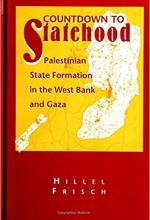 Despite the title, Countdown to Statehood is not about the struggle to attain Palestinian sovereignty over the West Bank and Gaza. Rather, it concerns the issue of what kind of state the Palestinian entity is becoming and will be. A narrative history of Palestinian insider-outsider tensions and competitions over a period of decades is intended as a means of elucidating the character of the existing and emerging Palestinian governance. One approach to an inquiry into Palestinian government would be to identify and explore the most fundamental questions: Is it democratic? Is there rule of law? How adequately does the government cope with problems? Does it promote or hinder economic development? How does it understand "development"? Are its institutions just? Are human rights protected? Will economic well-being and power become more concentrated or more equally distributed?
Countdown does not take on all of these questions. Its primary point of reference is the concept of "neopatrimonialism," by which is meant an autocratic concentration of power in a central figure but differing from classical patrimonialism in that it exists within a popular understanding that grounds legitimacy in democratic structures. The book, therefore, is largely about Yasir Arafat's rule. Despite its academic style, what comes through is a critique of Arafat's rule and leadership style, which is depicted as concentrating power in one individual, lacking accountability, and failing to develop independent and professional institutions of government. In the main, this book is a very detailed historical account of the Palestinian example of what the author sees as general processes that emerge when a national movement's leadership is based outside the territory it seeks to liberate: Conflicts between inside and outside wings emerge when the leaders returning seek to "territorialize" that leadership. The book's central chapters deal with territorializing the PLO, education and state building in the 1970s and 1980s, the intifada and state building, and the struggle between inside and outside surrounding the Madrid peace process.
The general pattern that Hillel Frisch identifies is one in which the larger Palestinian interest in state formation is sacrificed to the tendency of a diaspora-based leadership to thwart the development of territorial institutions that it might not be able to control. Of particular interest is the chapter on the Madrid process, which the author sees as representing an unprecedented threat to "the historic relationship between inside and outside" (p. 109). Initially, Yitzhak Rabin is presented as seeking to "promote territorial Palestinians at the expense of the diaspora" leadership (p. 119). Ironically, the stark repressiveness of Rabin's tactics for dealing with the intifada--complete closure and expulsions--resulted in a dramatic stiffening of positions among the Washington-based negotiating team, and this, in turn, led to Rabin's increased interest in the Oslo track as he came to see the outside as "more pliable" than the inside. (p. 120). In particular, the author sees the PLO's desire for Israeli recognition as central to its decision to accept Jerusalem's exclusion from the interim autonomy agreement.
Frisch's analysis is problematic and illustrates the difficulties of establishing the larger thesis. An alternative characterization might note that Rabin never would have agreed to include Jerusalem within an autonomy agreement. Thus, the hardened position of the Palestinian delegation may have confirmed for Rabin that only Arafat had enough political prestige to cut a deal within the realm of the possible. This view raises an underlying issue, not considered by the author, of whether there is a real conflict between democratization and reaching a peace agreement with Israel. Certainly such was the case for both Egypt and Jordan, where strong nondemocratic leaders took decisions at odds with popular sentiment. Might it also be true of Palestine? Might desirable statebuilding and the state's very existence be in conflict? There is no easy answer here, and one can plausibly argue that a much more vibrant Palestinian democracy might enhance both international support for the Palestinians at the negotiating table and the willingness of the Israeli public to support major compromises. However, the book does not go into these interactions.
By drawing us into the adequacy of governance issue, Countdown highlights the need for a more explicit and comprehensive evaluation. Nevertheless, taken in its own terms, this is a valuable book. There is a tremendous wealth of information assembled here, and this alone will be of considerable value, even to long-time observers of the Palestinian scene.