Tibi: The Challenge of Fundamentalism 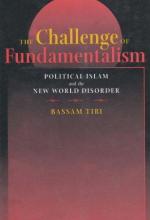 The central argument of this tiresome and endlessly repetitive book contends that Islamic fundamentalism is a threat to world peace and seeks to separate Islamic civilization from the rest of humanity by claiming for its worldview a universalism that foments "world disorder." The author simultaneously warns readers not to confuse fundamentalism with Islam and concludes by suggesting his own vision of an Islamic "enlightenment" coupled with what he calls "cultural pluralism" and a "cross-cultural foundation of human rights on the basis of an international morality acceptable to all civilizations" (p. 212). Tibi identifies himself as a Muslim "liberal" (p. xv) and says that his Islam is a melange of Sufism, Ibn Rushd, Ibn Khaldun, and Farabi.
The difficulties of sustaining the book's central argument are apparent from the very beginning. Acknowledging that fundamentalist movements are diverse and incapable by themselves of constituting a threat to European security, the author nevertheless asserts that they are a threat because of the decline of the nation-state and the consequent destabilization that this decline engenders. Rejecting Samuel Huntington's thesis about the clash of civilizations, Tibi promptly tells us that "most Muslims" view the Gulf Crisis of 1990-91 as a "clash between their own civilization and the West" (p. 16). Indeed, it is not Huntington but rather the fundamentalist Egyptian Sayyid Qutb who invented the concept of the clash of civilizations (pp. 56, 81). Tibi's evidence for Islamic fundamentalism's capacity to upset world order lies in the claims to theocracy made by assorted fundamentalist writers and the revival of the concept of jihad by such groups as Palestinian Sunni "terrorists" (p. 55), who obstruct the peace process (p. 57), and suicidal Shi`i "terrorists" in southern Lebanon (p. 55). If further proof is needed, readers are asked to contemplate the record of the two fundamentalist states, Iran and Sudan, for a taste of what is to come. However, if fundamentalists come in all shapes and sizes, then readers are entitled to know why the author insists on treating them as one entity.
Underpinning this tirade is a series of broad generalizations for which Tibi offers not a shred of evidence. Typical is his repeated characterization of the world as one where international relations are becoming less state-centered and more "elevated" to "relations among civilizations" (p. 10) or his other favorite: that "structural globalization" is accompanied by "increasing cultural fragmentation" (p. 66). Such assertions are presented as if they were self-evident and unchallengeable. Even more ominous is his analysis of Islamic history and institutions. Tibi contends, for instance, that "Islamic tradition" recognizes no boundaries and admits "only God as the sovereign" (p. 38); that the Qur'an is "replete with references to the Arabs' having been chosen by God" (p. 48); that "in Islam, there is no cultural understanding of individuation, and thus no concept of individual rights" (p. 91); that most Muslim rulers were "hateful despots" (p. 177); and that "the requirements for successfully promoting democratization are virtually absent in Islamic civilization" (p. 191). Such statements are not simply puerile: they are fatal for his own central argument. They reinforce precisely the viewpoint that he pretends he is combating, namely the identification of fundamentalism with Islam.
Nor are Tibi's views about the modern Middle East of any more value. Thus, "Muslim Arab Kuwaitis and Muslim Arab Moroccans are not of the same culture" despite their one language and one faith (p. 129). The Middle Eastern state is a "Republic of Fear" (pace Khalil/Makkiya; p. 122). The Kuwaitis are "bedouin in elegant modern cars" (p. 191). The tedious clichب that the Arab states of the Middle East are "tribes with flags" (p. 8) is reiterated as if it hid some analytic profundity. None of these stereotypes are surprising given that Joseph Schacht and Nigel Coulson are Tibi's chosen experts on Islamic law, Ann Elizabeth Mayer his guide on Islam and human rights, Liesl Graz his guru on Kuwait, and a Gabriel Ben-Dor his inspiration on the "passion" of Arab nationalism. Lacking proof for sweeping generalizations, often self-contradictory, and immensely egocentric, hardly a page in this book can pass historical, conceptual, or logical muster. The kindest thing one can do is to consign it to a richly deserved oblivion.