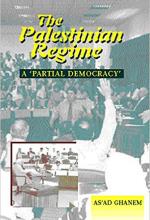 In this volume, As'ad Ghanem examines the dual character of the Palestinian Authority (PA) as it developed under the Oslo Accord and thereafter. On the one hand, as he notes, Palestinian society in the West Bank and Gaza features many of the formal trappings of democratic governance, including an elected presidency and elected legislative council, as well as the various institutions of civil society. On the other hand, many of these institutions are weak or marginalized, with the formal rules of pluralism overridden by other (often informal) practices that increasingly have centralized power over time. The result, he argues, is a "partial democracy" characterized by growing authoritarian measures and a concentration of power in the hands of Yasir Arafat, exerted through various means of control.In making this case, Ghanem first offers an overview of the Palestinian national movement and the interaction of democratic and centralizing impulses within the PLO. Here he points to the growing concentration of power in Arafat's hands after the 1982 war in Lebanon and the pluralism inherent in Palestinian activism and civil society in the pre-Oslo West Bank and Gaza. Thereafter, he explores the structures put in place after Oslo, including the executive, judicial, and legislative institutions of the PA, as well as the 1996 election process. Finally, he examines how the centralization of power has occurred, emphasizing the twin forces of political intimidation and political cooptation through patronage. In his conclusion, Ghanem argues that the PA's anti-democratic characteristics are linked directly to the security focus of the Oslo accords. However, he rejects the notion that the Israeli factor is, in and of itself, a sufficient factor to explain Palestinian authoritarianism (p. 150). In addition, he suggests that the nature of Palestinian society and the character of Palestinian leadership also have played a key role. Consequently, he suggests that fundamental change will require a change in Palestinian leadership, the emergence of new political forces committed to democracy, an end to Israeli occupation, and changes within Palestinian society.This book is useful in focusing its attention explicitly on post-Oslo political development. In contrast to Naseer Aruri's rather polemical, anti-Oslo introduction to the volume, Ghanem's tone is generally fair and balanced. His work combines historical context and analysis of current structures and processes. Finally, he shows an appreciation for the importance of formal rules and institutions and the myriad ways in which these formal structures are circumvented or subverted. There are, however, some weaknesses in this volume, such as overemphasis on formal structures and written texts. For example, the author devotes substantial attention to the role of the Palestinian Economic Council for Development and Reconstruction (PECDAR), based in large part on its formal mandate and PECDAR publications (pp. 108-10). In practice, PECDAR plays a much more modest role than Ghanem appears to recognize, while much more powerful components of Palestinian economic planning are barely touched upon. The actual interaction between donors and the PA goes unexamined, despite its importance in regime consolidation. And he only briefly touches on the role of monopolies, secret funds, and quasi-public holding companies (p. 111) despite their huge importance in financing the security services and Arafat's network of political patronage--and despite the availability of significant information on this aspect of Palestinian politics. Indeed, Ghanem could have used a much broader array of sources. There is myriad information available on governance, economic management, human rights, and rule-of-law issues from donors, international organizations, NGOs, scholars, and others--most of which is not referenced. Similarly, Ghanem's analysis of Palestinian society is hampered by ineffective use of the mass of available sociological data. Given that there is more time-series data available on Palestinian public attitudes and perceptions of public institutions than is available for any country in the Arab world, it is a shame not to use it. Finally, it is important to note that there have been striking successes in Palestinian institution building, as well as the more commonly noted failures. Many PA public officials worked hard to construct the foundations of future Palestinian statehood, in far from ideal conditions. Measured by other attempted war-to-peace transitions, the Palestinian experience is no worse than most, and better than many.While imperfect, this book is nonetheless a very useful examination of the factors shaping Palestinian political development, the trajectory of which has been affected profoundly by the collapse of the peace process and growing violence. Since the eruption of the al-Aqsa intifada, the costs of inefficient institution-building and Arafat's particular tendency to centralize power and fragment subsidiary authority have become even more evident. On the one hand, democratic institutions have been marginalized even further. On the other, weak command and control increasingly has inhibited the PA's ability to adopt and implement policies in the security field or any other. It is a depressing picture, and Ghanem helps us to understand why.

------------
Rex Brynen is associate professor of political science at McGill University and the author of A Very Political Economy: Peacebuilding and Foreign Aid in the West Bank and Gaza (United States Institute of Peace Press, 2000).