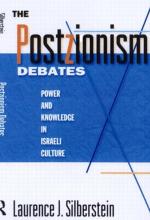 The term "postzionism" emerged in Israeli academic discourse in the mid-1990s, enabled by the political and intellectual climate of regional reconciliation and internal critique that the Oslo process had made possible. The term, and the culture of criticism that it named, was an attempt to make sense of an historic moment in the Israeli nation-state in which the traditional tenets of Zionism no longer seem urgent, necessary, or even ethically tenable. The "post" in "postzionism" signaled a refusal to depart entirely from the ideologies on which the Jewish state was formed--but to work within the contours of the state to reform its institutions, notions of citizenship, and collective memories.
Lawrence Silberstein's recent monograph, The Postzionism Debates, is less a meditation on postzionism of the 1990s (and here his title may mislead) than a history of Zionism's internal critics, told from a postzionist perspective. The book primarily is interested in the academics and scholarly institutions that have critically engaged with Zionism from within the Yishuv or Jewish state. Silberstein begins with Zionist discourse of the late nineteenth century (that of Yosef Brenner, Ahad Haam, etc.), arguing that early Zionist discourse and ideology were polyphonic and conflictual, rather than monolithic as much scholarship suggests. Subsequent chapters explore the "liberal Zionist critique" of the Israeli academy (Mordecai Bar On, Meron Benvenist, Amos Elon), the work of Israel's "new historians" and sociologists (Baruch Kimmerling, Benny Morris, Ilan Pappé, Tom Segev), and the political literature of Palestinians with Israeli citizenship (Emile Habibi, Anton Shammas). In the broadest terms, Silberstein's work offers a compendium of critical Israeli voices that have long been marginalized in both the U.S. and Israeli academies.
The strength of this volume is its breadth and concision, offering students of Israeli political history a very readable overview of critical scholarly voices "from within" (save those, it should be added, that have stepped too far outside the national consensus). Within a field that too often is blind to theoretical innovation, Silberstein's monograph is important in its attempt to put Israeli scholarship into conversation with poststructural theory. In the introduction and chapter 1, building on the work of Foucault, Silberstein argues that one understands Zionism as a discourse, "an assemblage of institutions, spatial arrangements, laws," productive of "particular kinds of subjectivities" (p. 17). Although subsequent chapters do little to follow this theoretical thread, Silberstein's methodological frame suggests fruitful avenues for scholars of Israeli political culture. Silberstein's chapter on "new historicism" and "postzionist sociology" is the most thorough and well-historicized within the volume, providing a rich genealogy of the central postzionist debates over Zionism and colonialism, the Holocaust and Israeli history, and the events of 1948-49. Of course, much of this is well-trod ground--and this is true for much of the volume. In part, this is the explicit project of the book: to collect these intellectual debates, histories, and scholarly biographies within a single volume. As such, The Postzionism Debates is a valuable teaching tool.
Yet, the strengths of this volume are undercut by several, recurring shortcomings. Perhaps most crucially, Silberstein's analysis suffers from inadequate historicization. Save his study of "new historicism," Silberstein devotes insufficient attention to the historico-political contexts from which critical scholarship emerged. By jumping from one intellectual biography to the next, one loses a sense of the more general trends within the Israeli academy, or among the intellectual elite, at particular historical moments. One wants to know more about the kinds of public critiques that were authorized and/or silenced by the Israeli victory in 1967, the rise of the Likud in 1977, the Lebanon War of 1982 and the culture of protest it spawned, the Oslo accords of 1993, with their promise (however fleeting) of regional reconciliation--and the ways the intellectuals examined in this book would be mapped onto these political histories. In tandem, Silberstein pays inadequate attention to questions of consumption--to the ways in which critiques and critics of Zionism were regarded by Israeli publics at particular moments (often, it should be noted, with considerable vitriol).
Nor does Silberstein do enough to mark the multiple limits and red lines of postzionist critique and the restrictions on those who were authorized to speak in its name within the Israeli academy. That the scholarship was, in keeping with the terms of cultural-political Israeli dominance, largely authored by Ashkenazi men, is invisible in Silberstein's account. Insufficient attention is paid to the ways that Mizrahi authors and histories have been marginalized by and within this literature, including those scholars engaged in the critique of Zionist discourse (such as Moshe Behar, Sami Shalom Chetrit, and Ella Shohat). And while Silberstein inserts Emile Habibi and Anton Shammas into his postzionist genealogy, he does so without adequate attention to the ways that Palestinians with Israeli citizenship (including the aforementioned authors) were perpetually spoken for by Jewish-Israeli scholars. In turn, the invisibility of feminist critics and critiques from Silberstein's account is merely symptomatic (rather than critical) of its absence from the postzionist intellectual field.
Silberstein concludes The Postzionism Debates with a cautious optimism. Historically, he notes, postzionist intellectuals spoke from "the margins of Israeli public and academic discourse," launching their critique of "unjust power relations in their society" (p. 209). "However," Silberstein writes, "if my analysis is correct, this [marginality] is slowly changing" (ibid.). Today, as Israeli public opinion moves ever further to the right, Silberstein's optimism seems tragically anachronistic. Indeed, many of those intellectuals who had participated in the postzionist project of the 1990s have endorsed the popular Israeli narrative of disappointment with, and distrust of, the Palestinian people, the loss of Arafat as a "partner for peace," and the fiction of perpetual Israeli compromise and Palestinian intransigence at successive negotiating tables. Many of them speak of the existential threat to the Jewish state and insist that (in their rendering) the besieged state now must defend itself. The Postzionism Debates reminds us of a history of Israeli criticism and dissent that seems to have all but vanished.

-------------------
Rebecca Luna Stein, an assistant professor of anthropology at the University of Minnesota, is a member of the editorial committee of Middle East Report. Her work on Israeli political culture has appeared in Social Text and is forthcoming in Public Culture.