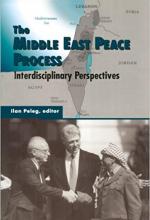 This edited volume offers a broad range of perspectives on the dynamics of the Madrid/Oslo Arab-Israeli peace process, including its relationship to Israeli attitudes and institutions, its effects on Palestinians and Jordanians, and its economic dimensions. Although many of the articles were first written in 1995, all have been partly updated or completely rewritten to reflect the less optimistic situation following Benjamin Netanyahu's election in May 1996.
As with any edited volume, the chapters in The Middle East Peace Process vary in quality and approach. The lead chapter, by Laura Zittrain Eisenberg and Neil Caplan, sketches a broad historical backdrop to Arab-Israeli peace-making. Two selections examine the relationship between the peace process and the ideological change in Israel. The first, by Mordechai Bar-On, examines debates within Israeli historiography. The second, by Myron Aronoff and Pierre Atlas, explores competing challenges to dominant Zionist discourse. Tamar Hermann and Ephrain Yuchtman-Yaar offer a tightly written analysis of Jewish and Arab attitudes to peace in Israel. At the institutional level, Gad Barzilai presents an extremely interesting treatment of the effect of the Israeli Supreme Court decisions on conflict and the search for peace. By contrast, Stuart Cohen's chapter on civil-military relations is solid but breaks little new ground.
This book was published as part of the SUNY series in Israeli studies. Perhaps as a result, the Palestinians receive somewhat less attention: there is a chapter by JoAnn DiGeorgio-Lutz on the PLO, and another by Daphne Tsimhoni on Palestinian Christians. Of these, DiGeorgio-Lutz offers little beyond what is already well known. Tsimhoni's chapter is more original, but it is marred by a lack of familiarity with the underlying dynamics of Palestinian nationalist politics. Also notable is what the volume is missing: any real treatment of the emergence and consolidation of the Palestinian Authority, surely one of the most important and striking outcomes of the Oslo agreement. This skewedness is reinforced by the editor's decision to devote as many chapters to Jordan as to the Palestinians: Curtis Ryan describes Jordan's engagement in the peace process, and Aharon Klieman reassesses the Jordanian option in light of Oslo. Moreover, while Klieman underlines both Jordan's interests and its geostrategic importance to any eventual peace settlement, he also suggests a residual fondness for a Jordanian role in Palestine at a time when the Hashimite kingdom has almost completely lost the influence it once had in the West Bank.
The final two chapters of the book address economic issues: the effects of regional integration on labor and the potential peace dividend for Israel. Although many of their points remain valid, reading these chapters does generate a certain nostalgia for the days when regional economic cooperation seemed possible.
Overall, readers' evaluations of the usefulness of this volume are likely to depend on their disciplinary orientation and familiarity with the topics under discussion. I found the chapter by Barzilai to be the most interesting and several others to be worth consideration as undergraduate reading assignments. In short, this is the sort of work that might not interest the specialist but that could be useful to students as a reference book.