Sela: The Decline of the Arab-Israeli Conflict 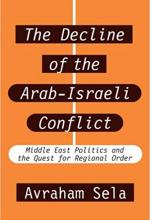 This volume examines several standard topics--the tension between state-building and pan-Arabism, Middle Eastern bilateral and multilateral foreign relations, and the search for regional stability--through the lens of Arab League summitry, addressing "the Arab-Israeli conflict as the ultimate sphere of interaction between state interests and all-Arab commitments" (p. 1). Although the resulting book does not dramatically alter our understanding of Middle Eastern politics, it is a thorough and valuable diplomatic history that illustrates the myriad roles performed by Arab League summits from the 1960s to 1990.
Hebrew University professor Avraham Sela begins with the frequently articulated observation that there are numerous potential conflicts between the values, ideologies, and political goals of the pan-Arab nation and the actual policies that individual Arab governments--given the leaders' desire to maintain the Westphalian state system--believe are in their states' "national interest." The most striking example of this tension is Arab policy toward the Israeli-Palestinian issue. In theory, the establishment of the state of Israel (and the subsequent expansion of its boundaries) demanded a unified Arab reaction that put the Palestine conflict at the top of a broad supranational agenda, which also included Arab unity and complete freedom from foreign intervention. In practice, however, rarely has there been such a response. Instead, Arab leaders have used anti-Israeli slogans and other types of nationalist rhetoric instrumentally to strengthen their domestic legitimacy and to paper over inter-Arab disagreements. Over time, these regimes have gradually developed the capacity to pursue autonomous foreign and domestic policies with only token regard for symbolic Arab concerns such as regaining Palestine.
Sela argues that Arab summits--the major venue for collective decision making on Arab core issues--played a critical role in this evolutionary process, both reflecting and shaping the consensus on Palestine (appendices summarize the official and "behind-the-scenes" issues at twenty Arab summits and indicate each country's level of representation at the meetings). Most significantly, the summits provided an official forum for redefining collective goals and "served as a mechanism of collective moral authority assigned the task of bridging the contradictions between pan-Arab nationalism and realpolitik through reinterpretations of raison de la nation and adjustment to raison d'etat" (pp. 20+n21). In other words, summitry was a way to legitimize shifts in the policies of Arab states away from previously articulated common norms and toward approaches that were more consistent with their individual state preferences. In addition, the summits helped maintain regional stability by managing inter-Arab conflicts. Sela argues that as the Arab state system became stronger, Arab summits--whether on Palestine or other topics--became less critical to the maintenance of the constituent regimes.
If Sela is correct, he raises interesting questions: What if Israel had never come into existence? What would the Arab world be like today? Would it have roughly the same set of states, with similar boundaries and forms of government, or would the pan-Arab dream, as expressed by Gamal `Abd al-Nasir and the Ba`thists (among others), have led to a significant reconfiguration of the Arab polity? How would divisive inter-Arab conflicts have been resolved absent the common concern of Israel to provide the impetus for cooperation?
Sela is meticulous in his examination of the available public documents on Arab summitry. This comprehensiveness is a bit of a mixed blessing, occasionally making it difficult to follow the main argument. In addition, the book would have benefitted from more careful editing to reduce redundancies; correct inappropriate capitalizations; simplify long, convoluted sentences; and eliminate nonstandard acronyms such as PR (Palestinian Resistance) and EC (Eastern Command). Despite these problems, however, the volume is a welcome addition to the literature on Arab foreign policies, the Arab-Israeli conflict, and the relationship of state and intergovernmental political entities. Whether or not one agrees with the author's primary hypothesis about the centrality of the Palestinian-Israeli conflict in driving the dynamics of inter-Arab summitry, the book is an engaging exposition of the evolution of those issues over the past half-century. The material also could easily be employed in support of a number of different interpretations of that history. Furthermore, as the significance of the Palestinian issue in both inter-Arab and major power political deliberations continues to decline, Sela's observations about the considerable and sometimes unintended roles that this conflict played in an earlier era are instructive in attempting to ascertain possible future directions for diplomacy and national development in the region.