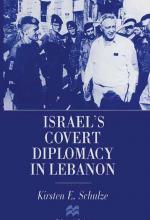 According to conventional accounts, Israel was until recently bound by the restrictions of its regional isolation. To speak of its Arab foreign policy, then, was considered an oxymoron. In a work that focuses on Israeli-Maronite relations and draws on the work of Avi Shlaim, Laura Zittrain Eisenberg, and others, Kirsten Schulze argues that Arab nonrecognition of Israel did not prevent Israel from pursuing its interests through covert diplomacy or intervention; "regional isolation has not led to political aloofness and withdrawal but rather to active intervention in the internal politics of the neighbouring Arab states" (p. 1). The double motivation of such intervention--to influence local politics so as to assure a favorable regional balance of power--is, according to this work, best exemplified in Israel's covert policies in Lebanon.
Schulze focuses not on Israeli relations with Lebanon, but rather Israeli interests in pursuing its relations with Lebanese Maronites from the period of Israeli independence to the Israeli invasion of Lebanon in 1982-84. Israel sought the cultivation of covert relations with regional minorities sharing a common anti-Arab nationalist outlook. The common "enemy" that cemented such alliances changed over time. In the first stage of the Israeli-Maronite alliance it was Islam, according to the author (p. 160). In the second it was Nasir and pan-Arabism. The final stage "came with the influx of Palestinian refugees into Lebanon" (p. 161). Israel's invasion of Lebanon in 1982, with its attempted control and synchronization of Israeli-Maronite policies, represents the culmination of the minority alliance system in this context. Far from being an aberration, Schulze maintains, the policies of the Likud Prime Minister Menahem Begin and Defense Minister Ariel Sharon were consistent with those of earlier Labor party leaders such as Ben-Gurion, who crafted "the politics of intervention pursued by Israel ever since its creation" (p. 10).
As Schulze explains in her introduction, the main thrust of her study is on "Israeli thinking, Israeli strategy, Israeli policy and Israeli decision-making" (p. 5). Accordingly, she subordinates related subjects, including "the Shi'a, the Druze, the Syrians or the Palestinians unless they are relevant to Israeli-Maronite relations" (p. 5). The limits thus imposed have an adverse effect on the resulting interpretation, which is shortchanged by the inadequacy of the treatment of the Palestinian question, Lebanese politics, and the U.S.-Israeli relationship. In Israel's foreign policy, for example, the Palestinian question cannot be separated from Israel's conception and pursuit of minority alliances or its interventionist politics in Lebanon and the region, although the role of the Palestinian question in the early history of Maronite appeals to Israel is obviously not the same. By 1982, anti-Palestinianism was a common thread in Israeli and Maronite policies as described in this account.
In her discussion of Israel's Maronite allies Schulze observes that Israeli leaders failed to grasp the fact that Lebanese Maronites had a limited political base in their country and that not all Christians supported Maronite policies. But then what about the dynamic of Lebanese politics? Schulze's interpretation of Lebanon's first civil war in 1958, for example, reinforces a sectarian view of Lebanon, which uncritically reproduces the Sham'un regime's justifications of its policies. This extends to references to "rebels," their foreign backers, their infiltrators, and their alleged threat to the state. Charles Malik, the arch exponent of Sham'unist policies and the tireless advocate of U.S. intervention is hardly the source to rely on for figures on foreign "infiltrators," whose numbers were simultaneously discounted by UN and U.S. officials.
With respect to Israeli-U.S. relations, Schulze simultaneously exaggerates the Israeli role in U.S. policy in 1958 while dramatically understating the degree of U.S. support for Israel in 1982. Israel emerges here as a critical partner of the United States in 1958 and as an indispensable intelligence guide to U.S. Middle East policy in the same period. This claim echoes the one offered by Israeli officials in their pursuit of closer relations with Washington. From Washington's perspective, Israel was among the advocates of U.S. military intervention in Beirut, a position it shared with the regimes of Jordan, Iraq, and Iran. One of the results of the events of 1958, however, was the rapprochement between the United States and Israel and U.S. Secretary of State John Foster Dulles's appreciation of the value of Israel's peripheral alliance system. In her interpretation of the Israeli invasion of Lebanon in 1982, Schulze understates the importance of U.S. support for Israel and the futile 17 May 1983 agreement that the U.S. and Israel sought to impose on Lebanon with the collaboration of its minority government, an agreement which legalized Israeli control over the Lebanese south, while assuring its continued political and military influence in the country.
What, then, was the outcome of the Israeli-Maronite alliance? Schulze concludes that it was a failure, one aggravated by Israel's false reading of its Maronite allies and by the false premise that military action was sufficient to achieve political goals (p. 157). Such an accounting of Israeli policies leaves open the question of how Israel's minority alliance politics affected the course of Lebanese politics, and indeed that of other states in the region. While these questions remain to be considered, there is little doubt that Schulze's work greatly augments our knowledge of the operations of this system in the Israeli-Maronite case.