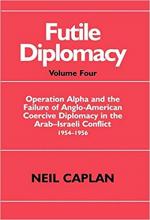 One feels awkward writing a review of 750 words on two volumes, especially when an author like Neil Caplan is concerned. He has proved in the past that he is an industrious scholar who devotes a lot of energy to mining archives, collecting and juxtaposing an impressive variety of sources. The reviewer is left with the task of commenting on the general themes, their validity and their relevance to the existing scholarly work on the history of peace in the Arab-Israeli conflict. And here lies the problem. Caplan is a cautious scholar, one who hesitates to go beyond the document, as if the archive is a shrine of truth not to be defiled by speculation, moral observations, or tentative, albeit reasonable, conclusions. So these two volumes, one dealing with peacemaking in the Middle East in the years 1948 to 1954 and the second with diplomatic initiatives from 1954 to 1956, are full of important and essential facts about the events in those years and also provide a succinct summary of the historiographical production in recent years dealing with these events.
One would like, when reading about peace in the past, to have more of an analysis and even an evaluation of the causes for the failure of the parties involved in the Arab-Israeli conflict to reconcile their differences and create a peaceful reality for their people. In volume 3, Caplan states his disdain for any speculations about the past (p. 276). He is not interested in apportioning blame. The reason for this, stated in a discourse reminiscent of that employed by the Zionist Left in Israel, is the perception of the Palestine conflict as a regional dispute fought between parties with equal moral bases and just causes, and hence failure in a peace process has nothing to do with intransigence of one party or the other or a postcolonial reality. It is a fate--like the one mentioned in Itamar Rabinovitch's mystical book, which told us that peace, after 1948, evaporated into thin air, and nobody knows why.
Surely the historiographical developments in the last one hundred years--beginning with bold statements in the first annual meeting of the American Historical Society (1902) and culminating in the clear challenge of Charles Beard to Von Ranke's dictum that historians should state clearly "what had really happened"--have told us otherwise. With the emergence of revisionist history in Israel, an updated version of what happened between 1948 and 1956 tells us who is to blame and why. The period covers events highlighted in these two volumes such as the peace efforts concluding the 1948 war, the abortive Israeli-Jordanian peace negotiations, Egyptian leader Gamal `Abd al-Nasir's overtures to Israel during Moshe Sharett's reign as prime minister, and, finally, the sad episode of the Alpha project, the last time the West proposed a solution that was balanced and just. Recent revisionist Israeli scholarship has portrayed Israel as the intransigent party in most of the these events. There was a chance for peace at the Lausanne conference convened after the 1948 war, but a euphoric and inflexible David Ben-Gurion rejected genuine peace proposals made by Husni Zaim in Syria and King Abdullah in Jordan. He also rejected a UN attempt, sponsored for a while by the United States, to base a solution in Palestine on the partition plan, the unconditional repatriation of the refugees, and the internationalization of Jerusalem. In the 1950s, Nasir was willing to consider an agreement that would retain a greater share of Palestine in Egyptian hands, a proposal that was not rejected out of hand by Moshe Sharett, the prime minister in 1953 and 1954, but was undermined totally by Ben-Gurion who was already contemplating the overthrow of Nasir and led Israel into the tripartite colonial collusion against Egypt in 1956.
No less surprising is Caplan's lenient attitude toward the Western powers, particularly the United States, especially in volume 4. He absolves the Western powers for playing any cynical role in their efforts as mediators in the conflict (p. 288). I am sure the State Department, given its unbelievable impotence and pro-Israeli stance today, would want historians in the future to describe U.S. policy in the 1990s in a similar way. The 1950s were not different. The West had a clear perception of who was a "good" and who was a "bad" Arab--and being good was the main condition for receiving American permission to enter the peace negotiations with Israel. Once an Arab partner joined the peace negotiations, it found out that there was very little to talk about with the Israelis (no territorial concessions, no repatriation of refugees, and no a change in the status of Jerusalem). The Americans, very much like Caplan in hindsight, blamed fate, not the Israelis, for the failure to bring about a peaceful settlement to the Palestine question.