Benson: Harry S. Truman and the Founding of Israel 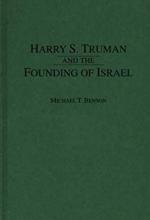 Historians have long debated the reasons why U.S. President Harry Truman supported the partition of Palestine and the creation of Israel in 1948: was he motivated primarily by political considerations in an election year, or more nobly by a moral imperative to secure a refuge for Jews, or was his hand simply forced by an inexorable series of developments that would have led to the creation of a Jewish state no matter what he did? Whereas the truth probably lies in some combination of all three possibilities, the topic is so emotional that historians rarely take such a middle ground. Critics of the partition decision tend to impute only domestic political motives to Truman, not giving him any credit for humanitarian impulses. Supporters of partition, on the other hand, not only credit Truman solely with noble motives but also purport to be horrified at the notion that he might have been driven by anything so crass as election politics or lobby pressures--as if politicians somehow lose all political motivation when the issue is Israel.
Historian Michael Benson is one of these sentimental scholars. We know where he is coming from in the preface, as he announces his intention to show "conclusively" that, "despite both domestic and international strategy arguments made by countless advisers, Truman's decision to recognize the State of Israel was made on the grounds of moral, emotional, and sentimental sympathy" (p. xi). Benson wears his own heart on his sleeve throughout the book and implies, absurdly, that assigning political motives to Truman would tend to portray him as acting out of "cheap political advantage," rendering the creation of Israel somehow "illicit and ignoble" (p. ix). Truman, Benson says repeatedly, did what was "right" in facilitating the creation of Israel because he had had a religious upbringing, heavily imbued with Bible study, that gave him a value system that showed him the "right" way.
Benson has done very thorough research, and he does indeed prove Truman's lifelong dedication to the Bible, as well as his morality. For all his research, however, Benson does not disprove that other factors such as electoral politics and the pervasive pressures of Zionist lobbyists, who included some of Truman's closest advisers, played as critical a role in shaping the president's thinking on Palestine as had his childhood Bible reading.
What is most notable about this book is its total pro-Israeli orientation. It is remarkable, in fact, that any scholar who has done as much research as has Benson could have ignored so totally the Palestinian people as one of the key ingredients of the Palestine story and could have evaded so completely the issue of whether Truman the moralist was selective in how he applied his moral principles to the two sides. As Benson would have it, Truman was so immersed in the Bible that he could never have violated fundamental ethics. But the author does not try to explain why the president could not seem to bring the same moral concern to the Palestinians' dispossession in 1948 as he had to the Jews' homelessness. For Benson, as for Truman, the Palestinians barely existed except as obstacles to the Zionist enterprise. The reader of this book would scarcely know there is a Palestinian side to the story at all: There is almost no mention of Arabs in Palestine; and there is no mention whatsoever that over 700,000 Palestinians fled or were expelled during the 1948 war--which Benson calls by its Israeli name, the "War of Independence."
Neither is it apparent from Benson's version of history that any morality might lie with the Palestinian side in the conflict. He seems to assume that Zionism was by its nature a moral cause, indeed, that any cause rooted in the Bible automatically gains a monopoly on morality. The Palestinians, of course, did not appear as such in the Bible, which apparently leaves them out of history. The trouble, however, with trying to deal with historical events solely in moral terms is that one must perforce ignore those areas where one's hero showed no morality. Morality in real life, and particularly in affairs of state, is seldom as clear-cut as it is in books.