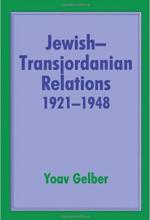 This book reports every conversation between the Jewish Agency, its representatives, agents and informants, and Amir (king in 1946) Abdullah or his representatives that the author could find in numerous archives in Israel and the Public Record Office in London. Its inclusiveness is both a strength and a weakness. It is a strength because the book thus becomes a useful reference for other researchers who might learn something about how Zionist intelligence saw the Arab world and about what Amir Abdullah was telling Zionist agents and leaders at given moments. It is a weakness because by reporting all these conversations, the author loses sight of relative importance. Hence it is an impossible book to read from cover to cover, but illuminating when read selectively.
The most interesting portion of the book covers the period from 1946 to the Arab-Israeli war of 1948. Here the author's closeness to his sources serves him well. In Collusion Across the Jordan (1988), Avi Shlaim devoted more space and greater analysis to the Jordanian-Jewish Agency contacts of the period, but his analysis is tinged by present mindedness. For Shlaim, King Abdullah is a visionary and a hero for attempting to negotiate in 1948 a settlement that would have gotten for the Palestinians the territory that they so desperately wanted in 1987 and that might have saved Israel from the antidemocratic methods and ideologies used to rule a large and resentful Palestinian population. For Gelber, quoting directly from contemporary sources, King Abdullah in 1947-48 and the Palestinian opposition (i.e., the Nashashibi faction) was a fifth column (p. 242). Not only did the Jewish Agency see them that way, that is certainly how they were viewed by Palestinians at the time. King Abdullah's willingness to come to an agreement with the Jewish Agency about dividing Palestine affected the calculations of the Jewish Agency, Britain, and the United States in a way favorable to the emergence of Israel and harmful to the creation of a Palestinian state. Palestinians in 1948 had reason to feel that Abdullah had sold them down the river to enlarge his own kingdom and his own political importance.
The author's closeness to his sources serves him less well elsewhere. Arabic personal and place names frequently are misspelled, as they may have been in the original intelligence reports. Arab political figures are cardboard cutouts, acting without apparent rhyme or reason, because Gelber fails to add context. Even Asmahan, one of the most popular Arab singers of her day, goes unrecognized as merely "a famous society lady" (p. 168). Then, there is a certain imbalance of judgment imbedded in word choices characteristic of both the author and his sources. While Abdullah "intrigues" throughout the book, the Jewish Agency, with its network of informers and agents trying to sew discord among the Arab states and the Palestinians, apparently does not. Palestinians are labelled extremist for not negotiating away their hopes for political sovereignty to European colonists; Zionists are not so labelled, not even those who want to expand their colonization into Transjordan. Palestinians commit an act of terrorism when they assassinate the British district governor of Galilee; Zionists do not when they assassinate Lord Moyne. The Palestine rebellion of 1936+n39 faded away, weakened, or dwindled; there is no hint that it was put down by a massive infusion of British troops.
To sum up, this book is a contribution to the field by virtue of its comprehensiveness. It presents new information, and I doubt there is much more to be found out about Jewish-Transjordanian conversations, at least until sources can be found on the Transjordanian side. However, more could be done by way of analysis. For example, Zionist intelligence reports could tell us at least as much about Zionist interests and patterns of thought as they do about their Arab subjects. Neither the author nor the Jewish Agency noticed the paradox of its attempt to shape events through Abdullah, who was seen as an influential political figure even while he asked for and received money from the agency to buy supporters. Finally, the book badly needs a sustained thesis that would allow the author to organize and present his information in a meaningful way. For all the talk that went on between Jewish settlers in Palestine and Arabs in Transjordan between 1921 and 1948, Avi Shlaim was right to concentrate on the conversations from 1946 on. It was those conversations that facilitated the emergence of a Jewish state and the stifling of a Palestinian one and that helped, therefore, to shape the Middle East as we know it today.