Shehadeh: From Occupation to Interim Accords 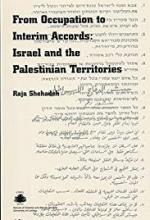 Shehadeh's book is the fourth in a series initiated in 1996 by the Center of Islamic and Middle Eastern Law of the School of Oriental and African Studies, University of London and the second book in this series to be devoted to the Israeli-Palestinian negotiations. It provides a fascinating analysis of the agreements concluded between Israel and the PLO since 1993. These agreements are the first in the history of the long-standing territorial dispute over historic Palestine. They are to lead to a final settlement between Israel and the PLO, and thus their success may be critical to an ultimate territorial disposition. They are of significance beyond the immediate context of the Palestine-Israel conflict because they represent a technique for resolving territorial disputes based on a gradual devolution of authority and resolution of outstanding issues after a period of coexistence.
Shehadeh is well positioned to write this book because he is at once an "insider" and an "outsider." He served as legal counsellor to the Palestinian delegation that negotiated with Israel in Washington in 1991+n92, following the historic Madrid Conference. As a result of his work at the negotiations, Shehadeh is intimately familiar with the issues treated in the Israel-PLO agreements. As a practicing attorney in the West Bank since 1979, Shehadeh well-versed in the land issue, having argued in Israeli courts against many of the confiscations. Shehadeh is already widely published on the legal issues involved in Israel's occupation of Gaza and the West Bank.
Shehadeh is an "outsider" to the Israel-PLO agreements in that the PLO negotiated the 1993 Oslo agreement (Declaration of Principles, often referred to as "Oslo I") without the extensive consultation with legal and other experts that had characterized the work of the Palestinian delegation in Washington. The PLO, as becomes clear from Shehadeh's analysis, was more anxious than the Palestinian delegation in Washington to reach an agreement with Israel and was more willing to sign agreements that omitted key Palestinian issues.
A central concern in the book is Israel's settlements in the Gaza Strip and West Bank. Shehadeh provides an account of how Israel, even prior to the recent agreements, had erected a separate legal status for settlements and settlers to keep them out of the Palestinian orbit. The question of Israeli settlement activity during the anticipated interim period preceding final status negotiations was one of several key issues on which the Palestinian delegation in Washington had sought resolution but that the PLO was willing to postpone. He views the Oslo agreements as solidifying Israel's separation of its settlers from the Palestinian population and Israel's control over the settlements. He views the agreements from Israel's perspective as an effort to carve out large sectors of the Gaza Strip and West Bank as areas of permanent Israeli control.
One of the more interesting entries in Shehadeh's book is a 1992 memorandum he wrote for the Palestinian delegation in Washington in which he outlined a negotiating strategy for the delegation. Shehadeh's strategy was premised on securing an end to the application of Israeli law in the occupied territories. Under Shehadeh's plan, such a curb would be agreed upon prior to negotiating a Palestinian self-governing authority. "Otherwise," reads his justification for this approach, "the Palestinians would be accepting to live in the small areas of land that have been allocated for them and the small portion of natural resources" (p. 270).
These words were prescient: In the wake of the agreements concluded with the PLO, Israel has continued land confiscation and settlement construction, bringing condemnation of Israel by the United Nations in a series of resolutions. Indeed, it has been this practice on Israel's part that has been largely responsible for the current stalemate in the Israeli-Palestinian negotiations. Shehadeh anticipated precisely what has occurred, namely, that Israel would control the occupied territories in a way that would render unlikely an ultimate accommodation minimally acceptable from the Palestinian standpoint.
Responding to the argument that the PLO realistically could not have gotten more favorable terms, Shehadeh writes that there was "a unique opportunity to capitalize on international support after the Palestinian intifada and the long and bitter struggle of Palestinians spanning most of this century and to use the good legal case to advance the negotiations to arrive at more favorable terms for the Palestinians" (p.168-69) The fact that the PLO took the approach it did in 1993 means that we never will know whether the approach of the Palestinian delegation in Washington might have proved more fruitful in the long term. However, the stalemate in implementing the agreements lends weight to Shehadeh's view.
Shehadeh provides a detailed analysis of the Declaration of Principles of 1993 and of the Interim (Taba) Agreement of 1995. In one highly useful chapter, he analyzes legislation enacted by Israel and the Palestinian Authority in implementation of their agreements. Shehadeh's overall assessment of the agreements is that Israel achieved for itself the capability of increasing settlement activity during the interim period, with a view to maximizing the land area it hopes to retain under its control in a final settlement.

----------------------
John Quigley, a professor of law at Ohio State University, is the author of Palestine and Israel: A Challenge to Justice (Durham, NC: Duke University Press, 1990), and Flight into the Maelstrom: Soviet Immigration to Israel and Middle East Peace (Reading and Berkshire, UK: Ithaca Press, 1997).