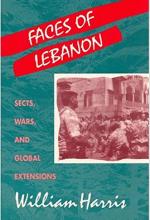 The tale of the seemingly unending Lebanese civil war has needed an update in English. The topic of Lebanon, for understandable security reasons, has not been attracting a lot of scholars and journalists in recent years. William Harris has lived and worked in Lebanon and has written a highly informative book. It provides a detailed account of Lebanon's slide into civil war and focuses on political developments in the 1980s and 1990s, a period that has not been analyzed adequately. The book falls into that special zone between journalism and scholarship. Documentation is based largely on an exhaustive survey of Lebanese and Israeli newspapers and media. Harris, however, often provides impressionable observations and reports unsubstantiated rumors (pp. 43, 63, 88, 90, 255, 334, and 336), especially if they fit into his ideological agenda.

The book contains a useful chronological account of the conflict in Lebanon, beginning with a historical sketch. The author, however, may confuse the reader, especially in the first part of the book, with his constant shifts in time. To write a book on Lebanon is always a challenge, requiring the author to be detached from highly charged emotional issues and to apply evenly critical standards of analysis. In that test, Harris mostly fails, clearly identifying with the Maronite-oriented groups and with Christians in general. His reference to Muslims is condescending. The Shi`a, for example, are depicted as a helpless flock manipulated by Syria or Iran (p. 54). He states that demands for equitable representation of Muslims and Christians in administrative posts is a threat to "bureaucratic efficiency" (p. 141), clearly implying that Muslims are inferior in qualifications. His preference for the prewar ruling class (p. 64) also could be seen as evidence of sectarian bias as it cannot be said that the current ruling class in Lebanon is in any way less unsavory or more undemocratic than that of the ancien regime. He sees Lebanon, in no small measure due to the Christian presence, as special and different from its Arab surroundings (p. 59).

Harris, in his main account of the civil war, attributes most episodes of violence, including clannish conflict and sectarian warfare, to the Syrian regime, downplaying the U.S. and Israeli roles (p. 16). The author has a very strong personal distaste for things Syrian. He expresses contempt for "`Alawi lower-middle class personnel" (p. 90), whom he sees as qualitatively different from the Lebanese. His tone toward Syria is polemical and vindictive, and he blames Syria for the assassination of its own clients in Lebanon, men like Rashid Karami (p. 218), Mufti Hassan Khalid (p. 255), and Rene Mu`awwad (p. 265). Karami was known as a most loyal ally of Syria in Lebanon, while the author's source for Khalid's assassination is Gen. Michel 'Awn (p. 336), hardly an objective "informant." However, it is important for Harris to portray Syria as the villain, to the point of reminding the reader constantly about the Hama uprising and its brutal crushing by the regime in 1982. Syria, of course, is responsible for some of the violent events in the civil war, and it has compromised Lebanese sovereignty, but so has Israel, which receives reverential treatment in this book.

Harris chose to ignore the 1982 invasion of Lebanon because it was "well covered by other authors" (p. 198). The Israel of this book is a state desperately seeking peace and tranquility in a region of brutal and irrational thugs. He does identify minor mistakes by Israel: It did not "comprehend" the Shi`a (p. 176); its handling of relations with them was "incompetent" (p. 6); and Ariel Sharon was perhaps too "energetic" (p. 172). One also learns from this book that people living under Israeli occupation are merely "supervised" (p. 172). Furthermore, the assassination attempt against Mustafa Sa`d, which was widely known to be planned and executed by the Israeli government, bizarrely is blamed on Amal (p. 334). Israeli allies in Lebanon, like Bashir Gemayyel, also receive preferential treatment. Thus, the latter's 1981 action in Zahlah is reproduced in a completely different light as Harris blamed it, yet again, on the Syrians.

Of all the Lebanese factions and leaders, one hero emerges for Harris: Gen. Michel `Awn, who "deserve(s) note as the only democratic populist in the contemporary Arab world" (p. 246). Victims of `Awn's indiscriminate bombardment of civilians might disagree with the author's understanding of democracy. Harris believes that `Awn was free of militia bias (although he participated in right-wing militia forces fighting against the Palestine Liberation Organization as early as 1975+n76) and sectarian prejudice (although `Awn made sectarian appeals while he was holed up in the presidential palace before he was evicted by Syrian bombardment in 1990). However, Harris does criticize `Awn for daring to make "verbal attacks on the Israelis" (p. 273).

In sum, this book suffers from blatant political and ideological bias. The author clearly put effort and time in its preparation but failed to produce a balanced account of this important period of contemporary Lebanese history. In the absence of alternative accounts, this book can be used for its chronology. In addition, although Harris portrays Rafiq Hariri, whom he sees--as he sees everybody else in Lebanon--as a mere Syrian puppet, his criticism of his regime seems justified. Finally, his pessimistic conclusion about Lebanon's future is warranted given the inadequacies of the Ta'if Agreement.

As`ad AbuKhalil is assistant professor of political science at California State University, Stanislaus, and research fellow at the Center for Middle Eastern Studies at the University of California, Berkeley.