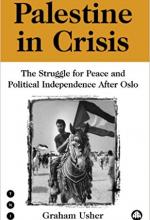 Graham Usher, unlike many of his fellow foreign journalists covering Israel and the occupied territories, has made a point of spending a prodigious amount of time not only in the West Bank but also in the Gaza Strip. In his work for Middle East International and other publications, he has distinguished himself as both a keen reporter and analyst of contemporary Palestinian affairs.
This short book was commissioned by the Transnational Institute, which approached Usher to write, in the words of Joe Stork (formerly editor of Middle East Report, in whose pages Usher's work also has appeared) "a short, critical account of the circumstances that produced the Oslo accords and the implications for the Palestinian-Israeli conflict" (p. vii). As a well-informed observer of developments on the Palestinian-Israeli diplomatic front and as someone who is not predisposed to parrot the conventional wisdom concerning the Oslo process, Usher is well-placed to offer important insights into the dynamics of Israeli-Palestinian relations in the two years following the signing of the Oslo accords in September 1993.
Usher's point of departure is that Oslo does not promise a just peace and comprehensive reconciliation between Israel and Palestine. History rarely records such mutually advantageous agreements. Nevertheless, because of the hype surrounding this agreement, it seems appropriate to state the obvious and to begin an analysis from this point of departure.
Usher's short, useful recounting of the pre-Oslo environment fails to stress an important factor: The vital role played in still underemphasized security talks between Palestinians and Israelis--a parallel dialogue that predates many of the more public breakthroughs and which is the central factor in determining the nature of relations between Israel and the Palestinian Authority (PA). However, Usher notes correctly that the struggle for Palestine always has been a territorial struggle and that the Declaration of Principles was "deeply ambiguous" on this issue (p. 9). Usher also correctly points out the dominant security-oriented Israeli view of the Oslo process, which proposes a restricted notion of Palestinian self-rule as the vehicle for insuring recognition and protection of Israeli interests. He is correct to note that Israel cares less what the Palestinians call this entity than that it serves the function they demand of it.
Usher offers valuable insights into the nature of Palestinian civil society in which the "outside" so completely overwhelmed those on the "inside." The weaknesses of Palestinian civil society rarely are addressed either by critics or supporters of the Oslo process. Usher argues that the nature--and the shortcomings--of Palestinian society are a vital consideration when assessing the prospects for attaining just and lasting peace. He quotes Haidar Abdul Shafi's self-critical observation that Palestinians lack the ability and the will to exploit the opportunities created by the Oslo agreements (p. 13).
Any attempt at writing instant history runs the risk of making judgments that subsequent events render untenable. Usher makes important advances over the usual, uninformed discussion of Hamas's role in the post-Oslo process. However, he proves too sanguine about the extent to which Hamas has been prepared to mount violent opposition to the PA and the agreements (p. 30).
Likewise, Usher's discussion of the Paris Protocol outlining economic relations between the PA and Israel has been overtaken by events. In 1995, no one could have foreseen the economic abyss into which the Palestinians subsequently have fallen. This is not a consequence of the implementation of the protocol. Rather, it is a result of circumstances that have kept most Gazan family heads unemployed.
Usher makes a valuable contribution to the analysis of the Oslo process by arguing that the Palestinian predicament is at root a Palestinian responsibility for the unequal terms of the Oslo process, which, Usher argues, "[i]s the bitter fruit of the structure of politics for which the PLO leadership and virtually all factions, including the opposition factions, bear a historic responsibility" (p. 80).

-----------------------
Geoffrey Aronson is the editor of Report on Israeli Settlement in the Occupied Territories, published by the Foundation for Middle East Peace.