Baconi, Hamas Contained: The Rise and Pacification of Palestinian Resistance 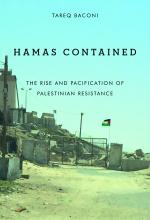 Hamas is one of the most globally renowned Islamic movements. It is as much a household name as al-Qa‘ida and the Taliban. Despite this fame, it is little understood, probably less so today than ever before. It has been defined as a terrorist organization and confined to this label. In fact, the whole Palestinian nationalist movement has become increasingly reduced to simple binaries and marginalized. In this context, there is something quietly revolutionary about Tareq Baconi's Hamas Contained: The Rise and Pacification of Palestinian Resistance. The author dares to treat Hamas as worthy of in-depth analysis and gives it the sort of treatment that a serious academic would any faction within the Palestinian nationalist movement or other major political actor, thus addressing attempts to exceptionalize Hamas and political Islam.

In writing about Hamas, even the methodology used may be a radical act. Many of the books written about Hamas are organized thematically.* This is not necessarily wrongheaded, but such an approach tends to reinforce the idea of Hamas as a movement with an intrinsic and immutable nature. Baconi, in contrast, follows a strict chronological approach as he provides a political history of the movement. Such an organizing principle captures the movement's complexity as a rational actor that develops over time and reacts to events, weighing each particular context. Ultimately, it is not simply a movement bent on the destruction of Israel—if it is at all.

Baconi analyzes every major political decision Hamas has taken in painstaking detail, discussing scrupulously the major debates around each historical milestone. The study covers the movement from its 1987 establishment to 2017, though the detailed blow-by-blow breakdown starts with the outbreak of the Second Intifada, in September 2000 (p. 36). The depth and breadth of sources make this a remarkable work. Not since Khaled Hroub's Hamas: Political Thought and Practice (Institute for Palestine Studies, 2000) has an author provided such a thorough treatment of available written material on and by Hamas.

Far and away the primary source of this book is the monthly magazine Filastin Muslima, one of the movement's major publications. The other major contribution Baconi makes in term of sources is his thorough perusal of the secondary literature in Arabic. The extensive survey of written material is most welcome as there is a clear overreliance on interviews in studies about Hamas. The Hamas leadership is usually extremely willing to meet researchers, and like politicians, generally knows how to tailor its message according to their interests. There are also significant contributions from exclusive documents that the author has gained access to, like the minutes of the third-party backchannel negotiations in 2008 between Israel and Hamas (p. 52), and interfactional discussions on cease-fire negotiations during the fifty-day war on Gaza in the summer of 2014 (p. 220).

Through this meticulous analysis Baconi provides Hamas and the Palestinians “permission to narrate.”† Such consent has been frequently denied to Palestinians since the origin of their struggle; the overarching framework of the “war on terror,” the main geopolitical paradigm since 9/11, has managed to curtail it even further. One of the main challenges facing a work based on primary sources that are the mouthpiece of a particular political faction is gleaning information and analysis from the propaganda. Baconi rises to this challenge, often succeeding in putting forward revealing excerpts, giving the reader a sense of the logic and the anguish behind the decisions the movement makes. (See, for example, Hamas's reaction to the Mitchell Report on p. 43 and to Arafat's death on p. 76, its 28 March 2006 decision to unilaterally form its own cabinet on p. 103, or its sense of foreboding on the signing of the 19 June 2008 ceasefire on pp. 150–51.)

The main narrative that Baconi has extracted from this textual analysis is the notion of resistance. The term is easily the most repeated throughout the book (it appears at least 270 times in the text's body); and much of the book circles around it (it is in its subtitle and two of its six chapter titles). Indeed, Hamas's main achievement is becoming the embodiment of Palestinian resistance against Israel. When it won the elections in 2006, reconciling its resistance agenda with the practice of politics became its fundamental internal struggle (p. 92). But at times, one is left with the feeling that the concept, which Hamas uses to justify its every move, has not been treated critically enough by the author.

Baconi's criticism of Hamas's use of violence during the Second Intifada is severe. And the self-defeating strategy that Hamas pursues with one attack after another against an incalculably more powerful enemy is described in its full nihilistic logic (pp. 50–51). The author places Hamas's use of violence in a larger historical narrative of the Palestine Liberation Organization's (PLO) experience: Hamas is going through the same motions, but without having drawn the lessons (p. 28). And yet the book establishes like never before the degree to which Hamas, as the PLO before it, has come to terms with the existence of Israel, and that its struggle is fundamentally against the occupation—despite its founding charter and maximalist rhetoric elsewhere. The author presents the Cairo Declaration in March 2005 as a turning point (p. 82) and provides one example after another throughout the book (pp. 93, 104, 108, 113, 114, 134, 229, 245). In fact, Hamas leaders have expressed implicitly time and again readiness to reach an agreement with Israel—for example, Hamas founder Ahmad Yasin offered to solve the conflict on the basis of the 1967 border in May 1999—but the movement, unlike the PLO, refuses to grant formal recognition in return for nothing (pp. 230–31, 248–49).

The final verdict is unequivocal. Israel's objective is to extinguish any Palestinian claim to rights, effectively blaming the victim (p. 84). Hamas, in spite of itself, provides a particularly useful vessel for such delegitimization (pp. xviii–ix, 58, 61). This is one of the main arguments developed in the book, from which the title and subtitle are drawn. However, this study provides much more: it offers a recent history of Palestinian political opposition to Fatah and of the Palestinian nationalist movement as a whole. Also, to reduce Hamas to this one aspect—being “contained”—is too narrow a view to take on the whole movement, and in the end it does precisely what the author sets out to avoid: explain the movement away.

José S. Vericat is the Carter Center representative for Israel-Palestine. He has a PhD in Oriental studies from the University of Oxford and a master’s degree in international affairs from Columbia University.