Kadman, Erased from Spaces and Consciousness: Israel and the Depopulated Palestinian Villages of 1948 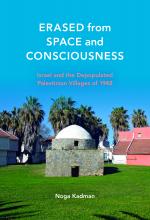 First published in Hebrew in 2008, Israeli researcher Noga Kadman’s Erased from Space and Consciousness explores how Zionist ideology has enabled Israel’s systemic erasure and appropriation of the Palestinian landscape. Beginning by mapping the Palestinian villages depopulated during and after the Nakba war, Kadman outlines Israel’s methods of erasure, propagated under the “Zionist ideal of ‘Judaization’” (p. 3), through the state’s official (re)naming, mapping, and establishment of communities or public sites in areas near or on the depopulated villages. In addition to her on-theground research (which benefited from her expertise as an officially licensed tour guide), Kadman uses a variety of official archives, including those of the Jewish National Fund, the Israeli Ministry of Tourism, and the Israel Nature and Parks Authority, to reconstruct the Zionist project as a narrative of destruction and confiscation. Through five chapters, Kadman traces Israel’s history of violent erasure and concludes that “instilling the depopulated villages in the Israeli public’s awareness and bringing these villages back into the history and geography of the land” (p. 149) might offer a path toward reconciliation for both Israelis and Palestinians.

She begins and ends the book with her own experience, recalling her grade school trips to the ruins of Lifta, a Palestinian village in northwest Jerusalem. Kadman outlines how visiting the village affected her thinking and awareness of Israel’s origin myths and the Palestinian Nakba, and then uses her own “awakening” to discuss national reconciliation and to highlight the potential that Israeli recognition of the Palestinian Nakba might offer for the future. Presumably as a step toward this kind of reconciliation, Kadman produces a meticulously documented narrative of Israeli memory creation, reconstructing the map of the Palestinian Nakba through an understanding of Israeli- Zionist cartography—both the literal and figurative erasure of Palestinian villages and the modes of Zionist assimilation of this landscape.

Though her narration of “beginnings” regarding Zionist settlement in Palestine is wrought with the political correctness emblematic in the historiography of the events surrounding the foundations of the Zionist state, she does offer a reading of the formal literature on the subject, outlining themain points of reference in “the making of the Palestinian refugees.” However, it is quite problematic that she begins this narrative with the 1947 United Nations Partition Plan, eliding the fundamental importance of the years of Zionist planning and two decades of British complicity in the project. She does, nevertheless, quote key Palestinian scholars in the field, including Walid Khalidi and Salman Abu Sitta—the only substantial part of her book that fully engages Palestinian voices. By relying on them, she frames her book with thoroughly researched Palestinian accounts of the dispossession of 418 Palestinian villages.

Kadman grounds her historical intervention with an academic survey of the theories of modern nationalism to explain both Zionist ideology and practice. Using this framework, she provides her reader with a clear understanding of Israel’s political philosophy and how it influences the state’s actions. Discussing the issue of national identity construction, she examines how the Zionist project of “spatial socialization” has disappeared Palestinians from the Israeli landscape physically through land dispossession and sociohistorically. Kadman’s most interesting contribution can be found in her description of the work of Israeli bureaucracy, particularly in chapter four’s exploration of the state’s naming commissions and their political methodology of erasure and prevention. She explains the thinking of Zionist leaders in the immediate phase of state building in the 1950s: to erase Palestinian names and history was to erase Palestinian presence and to prevent the return of Palestinian refugees. Kadman’s thorough analysis of the naming commissions and the politics behind them fits well into her argument, which considers Zionist practice as an ongoing process as opposed to an isolated historical event.

Kadman’s analysis corroborates the work of historians who approach memory as a multilayered combination of the past and the present. In this sense, Kadman constructs the present through her discussion of the Israeli tourism industry as a core component of understanding the ongoing dispossession of Palestine. Chapter five traces the state’s use of the tourism industry to fulfill the Zionist ideology of establishing a “bond to the land” through all available practical and rhetorical tools. This took the form of an intricate system of map making and land marking of public spaces (parks, preserves, hiking trails, and so forth). The book’s appendices, containing useful maps and lists of depopulated villages with pertinent historical details, are useful tools for understanding the enormity of the Israeli project of erasure and insertion. Kadman’s argument clearly and coherently exposes Zionism as a violent settlercolonial project, showing how the process has functioned over time to eliminate the native Palestinian population.

It is important to point out that this book is exclusively the story of settlers and settlement: a reconstruction of settler violence and erasure, but also a reproduction of a kind of settler violence in its silencing. With few exceptions, Kadman has little to no engagement with Palestinian sources or voices. The idea of reconciliation, as inadequate as it already is conceptually and politically, is further limited through this silencing as a state reconciles exclusively with itself.