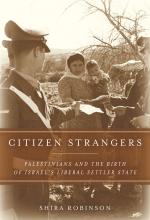 Citizen Strangers makes two valuable interventions in the field of Palestine studies. On the one hand, Robinson importantly adds to the sparse literature on the history of the relationships between the Palestinian “minority” and the State of Israel in the first ten years of its existence. On the other, this book provides a comparative analysis straddling Palestine and Israel studies and settler colonial studies. This review concerns the latter contribution.

Addressing dilemmas and contradictions, the book outlines how Israel’s approach to governing the Palestinians that remained within its jurisdiction after 1949 was unsystematic, even if consistently callous. The very decision to extend a citizenship that wasn’t to the Palestinian minority was a means to an existential end: keeping some Palestinians in was accepted in order to keep most out. As international recognition was essential to Israel but predicated on accepting all refugees, the state granted citizenship to some Palestinians in exchange for admission to the United Nations. Especially valuable is Robinson’s argument that because “Israel could not safeguard its wartime gains without enlisting considerable numbers of Palestinians to help” (p. 81), extending citizenship was one result of Palestinian resistance. Furthermore, the responses of the post-1948 Palestinian minority, traumatized and shattered, shifted and alternated between accommodation, avoidance, and even resistance depending on local opportunities. Robinson follows these developments with careful attention.

The book has also a wider aim: “to restore empire to the history of post-1948 Israel, and post- 1948 Israel to the history of modern imperialism” (p. 3). To do so, the author develops the notion of a liberal settler state. This category fundamentally challenges received interpretations of the conflict. If Zionism was always a settler colonial project, 1967 was no watershed. Similarly, since the authorities charged with governing and containing Palestinians adopted British techniques of indirect rule and administrative repression, 1948 is also not a watershed in the context of colonialism. Robinson’s ability to link Israel’s Law of Return with its need to develop a politicolegal framework to deal with the Palestinian minority is also a crucial insight. Israel’s resulting War on Return for Palestinians, even those who hadn’t moved, and the simultaneous Law of Return for Jews, even those who would not move, were predicated on each other, two sides of the same coin. (Robinson, however, does not reflect on the use of “return” in rigidly secluded contextual ways.) These are convincing conceptual achievements.

Robinson’s restoration of post-1948 Israel to the history of modern imperialism adopts a register of difference, but for the purpose of comparative analysis the opposite approach would have been equally profitable. While every settler society is exceptional, the claims that Israel’s “fusion of procedural rights with settler sovereignty was unique” (p. 8) and that it was the first among the settler polities to extend citizenship rights to indigenous peoples “in the midst of its ongoing quest for their land” (p. 9) are questionable. All settler societies enact a type of differentiated citizenship that discriminates against indigenous and exogenous “others” while ensuring the seamless absorption of selected co-ethnics, and all settler societies pursue the acquisition of indigenous land beyond the moment when formal citizenship is extended to indigenous peoples. Robinson defines pre-1948 Zionist promises of “equal living standards, cultural autonomy, and political equality” in the future state as “unprecedented” (p. 19). They weren’t. U.S. president Thomas Jefferson had, for example, famously issued very similar promises to Indians. What is notable is that these promises remained unfulfilled, not that they were proclaimed.

Ultimately, Israel’s refusal to “establish a singular nationality that encompasses all citizens” (p. 72), a refusal that Robinson masterfully situates in its historical context, is as much an Israeli predicament as a settler-colonial one. Similarly, the contradiction between those who reside and those who are entitled to the settler polity, and equally the contradiction “between equality and the rule of law” and the “illiberal measures necessary to colonize the country” (p. 80), are typical of all settler colonialisms. This is why, I would add, various reconciliation processes were eventually initiated and pursued with varying degrees of success in all settler societies. In each case, the ostensible need for reconciling indigenous and settler constituencies belies the liberal settler state’s need to reconcile paradoxical demands that are inherent to its constitution.

In the context of Israel, the Palestinian citizens were expected both to integrate and to remain separate. Robinson quotes one Israeli bureaucrat asking rhetorically: “Do we want them to become good Israelis, speaking Hebrew and indistinguishable from their Jewish fellow citizens? Or do we want to keep them as a racial minority?” (p. 141). That question was never satisfactorily answered. It was an impossible situation (and still is) for the Palestinian community. Robinson includes a Palestinian school principal’s panegyric to best capture the resulting dissimulation (she could have done more with this declaration of resistance). It was delivered during one of Israel’s staged “spectacles of sovereignty,” in which officials demanded that Palestinians declare their loyalty to the state and yet cringed as they did so. The speaker courageously trusted his interlocutors’ wishful thinking: “Repeat with me and raise your hands to cry, long live Israel and its just founder, the honorable Shaykh Haim Weizmann, the president of the state and the man of our time. May colonialism be defeated and injustice extinguished!” (p. 124).

Indeed: may colonialism be defeated.