The Gaza Strip: The Political Economy of De-development, 3rd ed., by Sara Roy 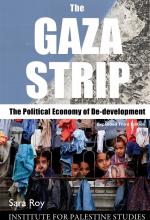 Two decades after its first publication, Sara Roy is presenting a third and expanded edition of her seminal book The Gaza Strip: The Political Economy of De-development. This book, initially published in 1995, was already the result of ten years of field research, an academic achievement that had shaped the concept of “de-development”: a regressive and holistic process generated by the Israeli occupying power in order to kill any attempt by the Gaza Strip and its residents to become fully autonomous.

The dependence therefore imposed was obviously socioeconomic, but had a deep and lasting impact on the Palestinian quest for national rights. As Roy puts it in the preface to this third edition, the de-development is to be completed by making the Gaza Strip functionally unviable. Israel has indeed managed to retain control over this Palestinian territory without physically maintaining the presence of its military and settlers. And Israel has nurtured the devastating illusion of “exchanging” the self-government of the Gaza Strip, from which it had disengaged in 2005, against an even more free hand in the West Bank, with an increased settlement policy.

The de-development generated by the two decades of Israeli occupation, from 1967 to 1987, was aggravated not only by the brutal repression of the first intifada, but also during the Oslo process that followed. The Gaza Strip was submitted to total closure one day out of three during the heyday of the “peace process,” from 1993 to 1996, and the induced loss of revenues was never matched nor compensated by international donors’ transfers. There were indeed no “dividends of peace” for the Gaza population, especially since the number of their workers admitted into Israel, which had fallen from eighty thousand in 1987 to thirty thousand in 1993, remained stable through the nineties.

Roy’s reflections on the shortcomings of the “peace process” were strongly formulated in the 2001 second edition of the book. Now, with a historical depth of thirty years of fieldwork, she considers that the process of de-development has come to completion with the 2005 Israeli disengagement and the subsequent denial to the Gazans (and destruction in Gaza) of the very principles of a viable economy: “given the policy of economic warfare against Gaza, it is but a short step from the goal of Gaza’s isolation and disablement to that of its abstraction and deletion. Israeli policy has also shifted from addressing the economy in some manner (whether positively or negatively) to dispensing with the concept of an economy altogether” (p. xxix).

In the last months of 2007, while the Israeli government deemed the whole Gaza Strip as “hostile,” the Supreme Court of Israel endorsed the government’s aggressive fuel cuts in Gaza as long as they did not endanger the “essential humanitarian needs” of the local population. Three wars on Gaza later (in 2008–9, 2012, and 2014), with an unprecedented level of destruction reached during the latest, Operation Protective Edge (OPE), Roy describes how the planned “reconstruction” is in fact designed to consolidate the Israeli grip on Gaza, with the United Nations (UN) as the main enforcer of an endless siege.

The publication in the appendices of two key post-OPE documents sheds an even sharper light on this perverted logic. The Gaza Reconstruction Mechanism (GRM), drafted between Israel, the UN, and the Palestinian Authority, enshrines a veto power to the Israeli government “based on security grounds.” Similarly, the Materials Monitoring Unit Project Initiation Document proves how far the UN and its agencies are ready to go in order to comply with Israeli demands, regardless of their impact on the daily life of the Gaza population.

Roy provides very dense and fascinating insights on the tunnel economy, its fluctuations and peak in 2010–11, followed by the joint Israeli and Egyptian campaigns against it, that only led to the collapse of the civilian dimension of this underground smuggling (while armed groups solidified their cooperation between the Gaza Strip and the Sinai Peninsula, an ominous process that the devastation unleashed by the current Abdel Fattah al-Sisi government on the Egyptian part of Rafah only worsened).

In terms of access to natural resources, the book also recalls the nefarious dynamics generated by the Israeli imposition of “buffer zones,” sometimes on the most fertile lands of the Gaza Strip, or by the restrictions on fishing zones. The water situation in the Palestinian territory is already catastrophic and the unemployment rate has soared to a mind-boggling 45 percent, twice the West Bank rate. An astute observer of the civil society in Gaza, which was the topic of her previous research (Hamas and Civil Society in Gaza: Engaging the Islamist Social Sector, published by Princeton University Press in 2011), Roy warns against the dissolution of such grassroots solidarity and cohesion: “In a society where people traditionally help each other, this appears less and less to be the case. There is simply too much loss, too much fear, too much uncertainty and too little possibility” (p. 400).

As Gaza and its population seem to regain international visibility only in time of war and destruction, this is a much-needed book.