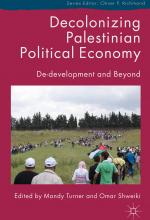 This edited volume sets itself the task of decolonizing Palestinian political economy by defying the colonial grammar that actively creates and sustains different “sections of the Palestinian people” (p. 2), covering the political economy of Palestinians living in different places (Israel, the occupied territories, Gaza, and the diaspora), and taking as its “starting point the concept of de-development as developed by Sara Roy” (p. 2). The application of de-development policies by Israel, according to Roy in the book’s foreword, (1) prevents the emergence of a competing Palestinian economy, and (2) “preclude[s] the establishment, in any form, of a Palestinian state” (p. ix).

In many ways, this book constitutes an invaluable addition to a growing body of literature focusing on the political economy of Palestine and the Palestinians. Overall, it provides an incredibly thorough and well-argued analysis of how macroeconomic structures and government policies have led to the de-development of Palestinians; and it is comprehensive in the breadth of the policy areas covered, from aid and water to transportation and finance. While like any edited collection, it exhibits inconsistency across the chapters, some contributions are true standouts. For example, Ismael Abu-Saad’s chapter brilliantly explores “State-Directed ‘Development’ as a Tool for Dispossessing the Indigenous Palestinian Bedouin-Arabs in the Naqab,” by combining a macro analysis of Israeli government land-confiscation and education policies with statements from young bedouin men and women who experience these policies in their daily lives. Omar Shweiki’s final chapter provokes readers to question the concept of development itself, or what it means to talk about development under occupation, by tracing the shift from the notion of ‘amal ijtima‘i (social work) at the peak of the revolution in the 1970s to the notion of development that accompanied the decline of the Palestine Liberation Organization in the early 1980s.

At the same time, the framing of the collection raises a number of questions for further consideration—and indeed, one wishes that the questions raised in the 1980s and documented by Shweiki, about whether it is possible to decolonize through the frame of de-development, had been addressed by other authors in the collection. Instead, the language of development that has been previously deconstructed by postcolonial social scientists tends to be normalized in the collection. The book remains largely uncritical of the word development as a “discourse of the west to rule the rest” and is mostly written within the frame of classical economic development, using terms such as “measuring growth” and “employment rates.” It is questionable whether political economy can be decolonized without decolonizing and being more critically reflexive of the concepts we use to discuss political economy; development in the global South has itself all too often been a process of dispossession. Another set of questions centers on the treatment of the Palestinian Authority (PA) in the collection. Many chapters work within the frame of reforming the PA as a redevelopment tactic, even though the PA is seen as a nonsovereign entity. As Sahar Taghdisi-Rad argues, “Hence to prevent further de-development of the Palestinian Economy, the PA’s development program needs to be radically altered . . . [to] include instituting and supporting processes of independent economic activity [and] employment generation” (p. 14). However, it would be more appropriate to treat the PA as a system of “indirect rule” as opposed to a state—even a nonsovereign one—due to the fact that it is predominately controlled by Israel.

Finally, there are remaining questions about the relationship between macro policies and everyday practices on the ground. Despite the goal of the collection to defy the colonial grammar of the fragmentation of the Palestinians through a macro analysis of the colonial policies that led to their de-development, what emerges from this approach is a sense that Palestinian experiences have been and continue to be deeply fragmented. The grammar is embedded in the lives of Palestinians, not something that can simply be rewritten by researchers. However, including a social analysis of how these policies affect everyday life would have incorporated the Palestinians into the process of decolonizing Palestinian political economy, entangling the macro and micro processes with practices of resistance.

The question remains whether any project of development is possible for a dispossessed nation. Yusif Sayigh spoke of the impossibility of such an endeavor in the early 1970s, claiming that “under the conditions of dependence-cum-dispossession . . . even dependent development is not possible, since Israel’s external-turned-internal colonialism blocks even capitalist transformation which mature capitalist industrial countries claim to promote in their relations with the third world” (see “The Palestinian Economy under Occupation” in JPS 15[4]). But then still who wants to develop like the “first world” did? The answer lies in a movement that will liberate the land from occupation and the Palestinians from the concept of de-development itself.

Mayssoun Sukarieh is a lecturer of Middle East and Mediterranean studies at King’s College London. She is coauthor of Youth Rising? The Politics of Youth in the Global Economy (New York: Routledge, 2015).